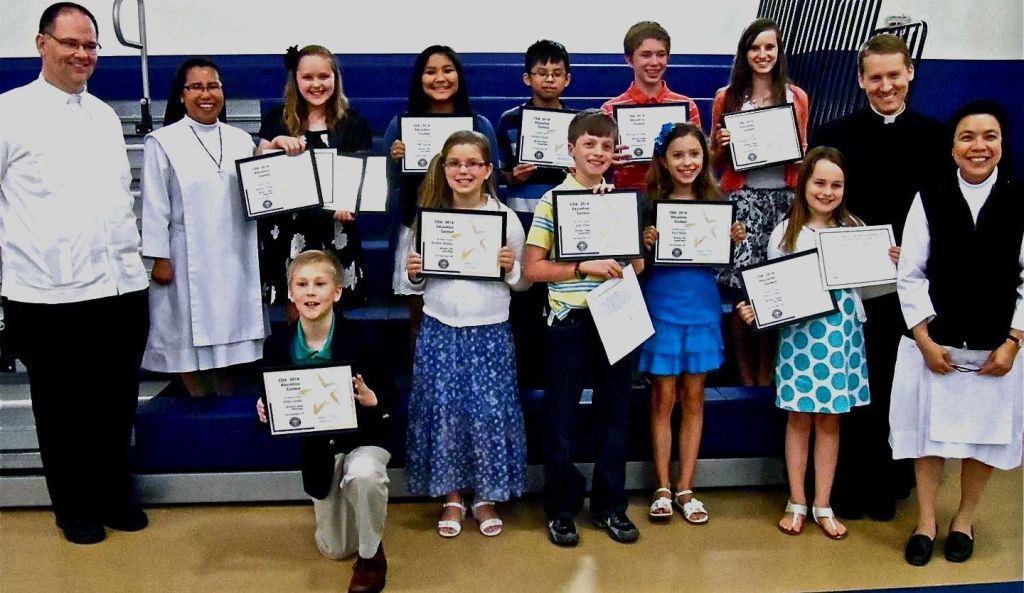 The Sacred Heart Catholic Daughters of America honored students who won their annual contests in art, essay, poetry, music and photography at their annual awards banquet in early May.
The themes this year were “Jesus loves us. How do we spread that love?” and “How do I promote peace in the world?” All students who placed first at the local level competed at the state level, where five of them took first place and three placed second.
Local Division One, or elementary, winners were Ella Trainor for poetry and Caroline Clark for both her essay and art. Division Two, or middle school, winners were Bess Bryan in poetry, Olivia Dagenhart for an essay, Ali Gerig for art and Keegan Dillon for photography. The Division Three, or high school, winner was Makayla Dillon in poetry, photography and art.
Because Trainor, Bryan, Gerig, Keegan Dillon and Makayla Dillon won at the state level, they will now advance to the national competition.
Dillon is a student at Salisbury High School.
The National Society of Colonial Dames of America in the State of North Carolina sponsors an annual Florence Kidder Memorial Scholarship for high school seniors who will attend a North Carolina college or university. The entrance requirement this year was a 500-700 word essay on the topic “What is True Patriotism?” and the applicants were to compare Colonial patriots with modern day patriots. Besides the essay, judges consider the students’ grades, extra-curricular activities and character.
The Rowan Committee of Colonial Dames selected two outstanding essays to be sent to the state competition for the $3,000 scholarship and $1,000 runner-up scholarship. These two students will receive an honorarium and be recognized at their high schools’ end-of-year honors and awards assembly. Rowan County winners were Paige Hartsell of Jesse C. Carson High School and Kirk Kovach of East Rowan High School. Hartsell is the daughter of Lori and Dennis Hartsell of Salisbury. Kovach is the son of Jill and Dennis Kovach of Rockwell.
The subject for the 2014-2015 essay will be announced in late fall when the school guidance counselors are contacted about scholarship requirements.
Last week, West Middle teachers and students said a final goodbye to the North Carolina icon that has rested within the walls of the media center for more than 20 years.
For years, a 150-pound scale model of the USS North Carolina built by Odis Darnell in 1961 has been the focus of fascination for many students passing through the doors of the library.
She was sent to the school in 1992 when Rick Hampton was principal and the new West Rowan Middle School building was first built.
Year after year, students have flooded the librarians for information about the model as well as the real Battleship that rests in Wilmington.
Before the ship took up residence at West Middle, it was displayed at Wilmington in the USS North Carolina Museum, as well as several other sites. It even made an appearance on floats in several parades.
Darnell’s sister, Shirl Wrap, had tears in her eyes as she conveyed her thanks to Kathy Holt, the media assistant at West Middle, for looking after the ship for the past years. The family seemed very pleased that the ship was still in such good condition. The students at West Middle have taken extra care with this work of art, because they knew they were fortunate to have it housed in their school.
West Rowan High School is hosting its annual Pops in the Park concert Friday evening.
Based on the popular “Pops at the Post” by the Salisbury Symphony, the outdoor band and chorus spring concert will include food, family, friends and fun music, providing a similar performance experience for students and local West Rowan community.
The concert will feature the West Rowan honors chorus, jazz band, percussion ensemble and concert band. Music will include the “National Anthem,” “Man of Constant Sorrow,” “My Girl,” “Fireworks,” “American Patrol,” “The Pink Panther,” music from “Star Wars: Episode I” and more.
Concessions will be available from 5:30 until the end of the concert including hotdogs, pizza, homemade baked goods and drinks.
The concert begins at 6:30 p.m. in the Cleveland Town Park, 300 Clement St., Cleveland.