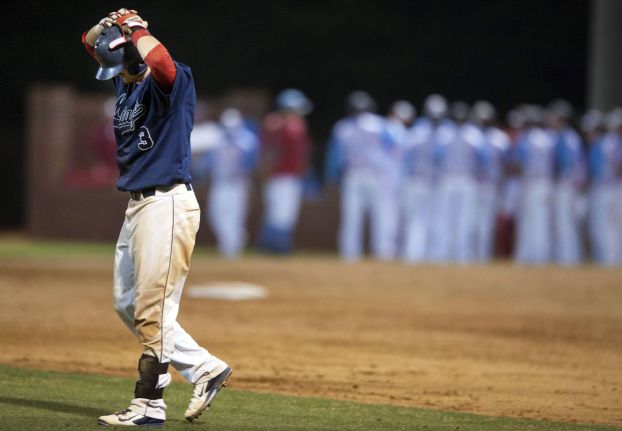 GRANITE QUARRY — Asked what he thought of first baseman Austin Harding’s great play, Piedmont’s junior pitcher David Nash laughed and said, “Which one? He saved me all night.”
Nash had a point. Harding made three fine plays, but the key to Piedmont’s 5-1 win at Staton Field in the third round of the 3A state playoffs on Tuesday was the one Harding produced in the bottom of the third.
It was 1-1, and East had filled the bases against a laboring Nash with one out. Mason Doby and Ty Beck had sandwiched walks around Michael Caldwell’s HBP, and now Nash had to face Ike Freeman, who swings in the 3-hole for coach Brian Hightower for a reason.
Freeman hit the ball squarely, right on the noes, and it initially appeared headed for the right-field corner for at least a two-run double.
Only Harding caught the ball with a dive. He turned that smash into an inning-ending — and eventually a season-ending — DP for the Mustangs.
“He makes plays like that and has made them all year,” Piedmont coach Milt Flow said. “Not only does he make the diving catch, but he has the presence of mind to still get to first base and double up the runner. Definitely the biggest play of the game.”
The Mustangs agreed.
“You’ve got to have that horseshoe sometimes,”sighed East catcher Luke Setzer. “Ike stroked that ball. He smoked it. That play killed us, killed all our momentum.”
Piedmont players bounced off the field after Harding’s catch, and they immediately put together a three-run fourth against East starter and loser Chase Jarrett (5-2). Three singles, a walk and a runner reaching first on a strike three in the dirt did the damage.”
“That’s a really good team we were playing,” Setzer said. “And in that inning, they found the holes.”
East scored against Nash in the first when Caldwell walked and made it to third when Beck’s bunt was thrown away. Freeman’s RBI single gave the Mustangs a 1-0 lead before the first of three Piedmont DPs ended the inning.
Jarrett preserved that slim lead until Piedmont leadoff man Nigel Hester began the the third with a blast over the center-field fence.
“Their pitcher was throwing a lot of curveballs, good curveballs, but I got a fastball down the middle and waist-high,” reported Hester, who signed with North Carolina A&T. “I was just trying to hit the ball up the middle, but it kept going.”
Flow said Hester’s bat has come alive in the playoffs.
“He didn’t hit a homer all year, and now he’s hit one in every playoff game,” Flow said. “I’d say that’s peaking at the right time.”
Nash (6-3) was a different pitcher after his team got him the lead.
“Once he had that 4-1 lead, he got a lot more comfortable,” Setzer said. “It’s tough to come back from 4-1 against a good pitcher.”
Joseph Peeler relieved Jarrett in the fourth. Piedmont (18-8) nicked Peeler for a run in the fifth that was set up by Colton Greene’s leadoff double, and that made it 5-1.
“Piedmont is very good, and we probably played our worst game in a long time,” Hightower said. “We never made that key pitch, never made that big play, never got that clutch hit. Those are the things that we’ve been doing every night.”
Right up until the end, the East fans who packed Staton Field expected a comeback. After all, the sixth and seventh is when the Mustangs have been getting it done.
Setzer walked to start the sixth but was erased when Harding came up the line to make a swipe tag and completed a 6-3 double play on Dustin Ritchie. East then loaded the bases on hits by Scott Sapp and Doby and Samuel Wyrick’s walk, but Nash struck out Connor Johnson to end the threat.
“Early in the game I was rushing things, was getting flustered a little bit,” said Nash, who explained that he’d never pitched in the sort of pressurized atmosphere Staton Field provided. “ But Coach stayed with me, and I did get better. I started locating better and I started throwing strike one to their hitters. That helped me have quicker innings.”
Peeler kept it 5-1 in he seventh, but Nash owned the bottom half of the inning. For the first — and only — time, the Mustangs went down 1-2-3, and Piedmont fans rang cowbells with delight.
Flow gave most of the credit to Nash.
“I was close to taking him out a couple times,” Flow said. “But he’s a little bulldog. Every time I thought about making a move, he would tell me, ‘I’ve got this.’”
Setzer was a bright spot for East. The center fielder-turned-catcher threw out two basestealers.
East’s season ended at 22-8, but it was a good one, especially coming after a 12-14 effort in 2013.
“It didn’t bounce our way tonight and we didn’t help ourselves out any,” Hightower said. “But I still can’t say enough about the guys I got to coach this year. From the first day to the last, they stayed with it, and they all got better.”
Piedmont will play at Carson Friday. Corey Sikes, who played right field, is expected to pitch against the Cougars. Nash will play second base.