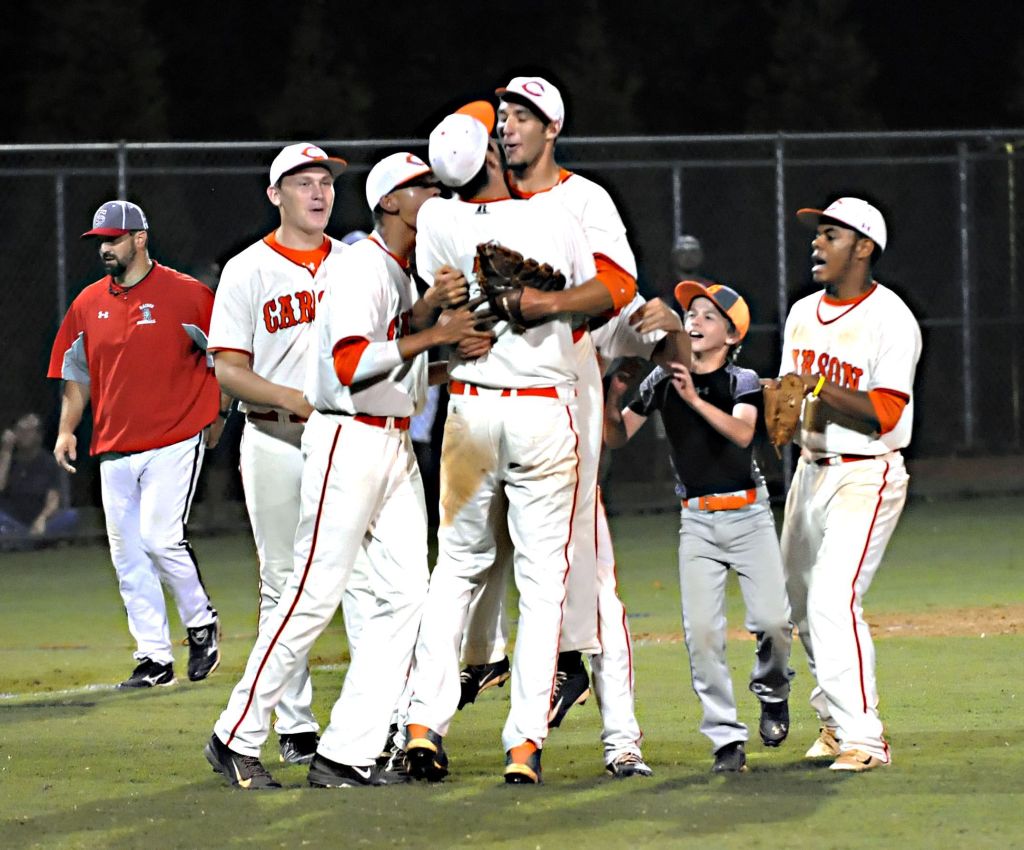 CHINA GROVE — South Rowan and Carson added a whole new dimension to their intense neighborhood rivalry Tuesday night.
The two SPC and county foes met at Carson in the third round of the State 3A West baseball play-offs and as expected it went to the wire. The Cougars scored four unearned runs in the first then snuffed out a Raider rally in the seventh to win 5-3.
There are just four teams left in the 3A West bracket and Carson (24-6) is one of them. As a reward they earned a fourth round home game this Friday against the Piedmont Panthers who downed East Rowan last night. At stake is a Western final best of three series against either Burns or North Buncombe next week.
“It is just good we are still playing,” Carson coach Chris Cauble said after escaping the Raiders. “We are glad to have another home game too.”
The credit for the win goes to a Cougar offense that pounded out 10 hits plus a typical grind-it-out effort from senior pitcher Dillon Atwell (9-2). He held the Raiders to just four hits while striking our six.
The biggest punch-out came in the top of the seventh with two outs, two speedy runners on base and a precarious 5-3 lead. But dangerous South hitter Chase Labbe went down swinging to end the game and close out a stellar 22-7 season for the Raiders.
“I was getting tired,” Atwell said as he surpassed the 100 pitch mark in the fina inning. “It was getting down to the wire and I knew I had to finish it because we are going to need all the pitching we can get on Friday night.”
Atwell had just given up an RBI single to Tyler Fuller and a walk to Chandler Corriher with two outs so he knew he had to make something happen with Labbe.
“I knew we needed a strikeout there,” he said. “So I kind of emptied the tank on that one.”
The Raiders were coming off impressive playoff wins over North Lincoln and top seed Marvin Ridge plus they had won a number of games this season in their final at-bat. Against Carson they just ran out of magic, however.
‘They executed the game plan which was to give us a chance to win and that is what they did,” South coach Thad Chrismon stated. “That is something we have been doing all year but we just didn’t get it done tonight.”
Chrismon noted the early 4-0 hole for his team was a disadvantage but they never quit. “We battled all the way back and had the winning run at the plate.” he said. “I am not sure these kids get enough credit and respect for what they have done this season. They play the game of baseball with confidence.”
The big advantage for South came in the first inning with two outs against unbeaten Raider lefty Blake Johnson. John Daugherty reached on an error then Bryson Prugh singled.
Speedy Michael Morrison then went backside for a triple to the fence in right and a 2-0 lead. Colton Laws then blooped a double to right for 3-0 and scored on a wild pitch to make it 4-0.
“We normally score a lot of runs with two outs anyway,” Morrison said. “ With runners on base you have got to do your job and try to get them in.”
Carson made it 5-0 in the third on a Daugherty double and a Prugh RBI single. South broke through in he fourth when Labbe doubled and Eric Stowe brought him home with a bloop single to left. It was the first run allowed by Carson pitchers in the playoffs after shutouts against North Iredell and Southern Guilford.
South closed the margin to 5-2 in the sixth as a two out double by Bo Corriher brought in Chandler Corriher. It stayed that way until the top of the seventh.
Ryan Ashworth drew a leadoff walk but Atwell recorded two quick outs. Fuller used his speed to beat out an infield single and drive in the run then Chandler Corriher drew a walk to keep South’s hopes alive. But Atwell closed it out with the strikeout.
“Dillon was running out of juice but he just bulldogged through on the last one, Cauble said. “I was confident but it did get a bit iffy there because South is a scappy bunch.”
The win was significant for a couple of reasons. This Carson team matched last year’s all-time win total of 24 victories plus they have now advanced into the fourth round for the first time in the school’s eight year history. Their Friday home game against Piedmont is at 7 p.m. and Cauble can call on John Daugherty, Colton Laws and Heath Mitchem plus some strong relievers to handle the mound duties.