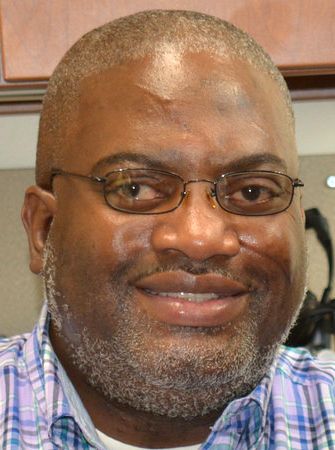 SALISBURY — They say virtue is its own reward, but it can still feel good to have your work recognized. That’s what Goodwill Industries recently did for Prince Moses, a peer support specialist with Social Work Service at the Salisbury VA Medical Center, during an event May 16 in Charlotte.
Moses was presented the 2014 Goodwill Industries of the Southern Piedmont GoodWork! Award for his work with Goodwill Industries. The GoodWork! Award is presented to individuals who have excelled in employment and leadership since receiving support at Goodwill.
Before starting work with VA, Moses received employment services through Goodwill and has continued to pay the help he received forward to others.
“I was in there shopping one day after I moved to Concord, and I wasn’t working at the time. My wife noticed they have a job resource center and said I should check it out,” he said.
Working with the job resource center to find work also provided Moses with the opportunity to help others.
“While I was going to Goodwill for help, I was also volunteering and helping because I couldn’t just sit there. I learned to embrace other people while sharing resources,” said Moses. “If they were a veteran, I could share things like what was given to me — I didn’t keep it to myself. I could relate and meet them where they were in life. I could tell them, ‘There’s still something you can do. Don’t get down, let’s look at this resource or check out this one.’ Sometime it was just doing common things we take for granted.”
“Goodwill was a powerful influence on me as far as counseling, consulting and encouraging me by meeting me where I was at the time,” he added.
Moses now uses the skills he learned working with Goodwill to help other veterans, and one of his focus areas is the homeless veteran population. Viola White-Douglas, Moses’ supervisor in the homeless program, said that experience has made Moses successful at what he does with VA.
“He’s very transparent, so if there is an issue that a veteran is struggling with, he tries to engage them to make sure they stay on track. He’s a team player. He’s an awesome, conscientious worker. He comes from a sincere place,” she said. “He meets veterans right where they are at the beginning, where a lot of times social work may not be able to make that same connection. As a peer, he can say, ‘I know what you’re talking about — I’m a veteran, too.’”
Moses, who is a combat veteran from Persian Gulf War, said being a veteran and giving back to other veterans by trying to encourage them gives him a good feeling.
“I’m glad I served, and that I’m able to give back,” he said.
Moses said he has never helped others for any reason other than it was the right thing to do.
“Seeing my life progress, and the positive changes I’ve gone through, sometimes when I look back at where I was compared to where I am, I’m still just so overwhelmed, but at the same time, I’m humble,” he said. “I’m humble and thankful for the VA, for what brought me here to the VA — now all I can do is smile and say, ‘Look at me now.’”