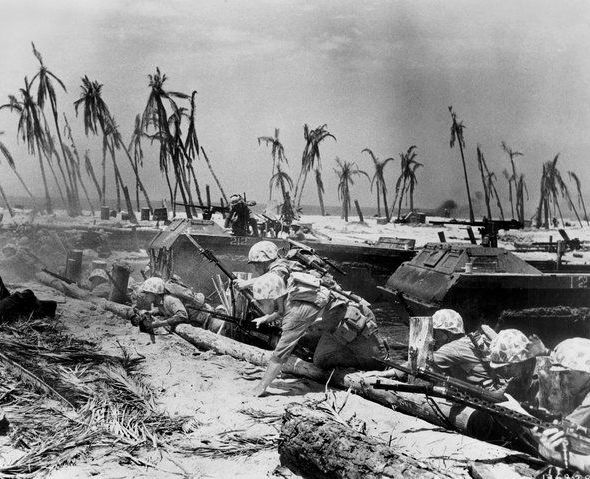 The Battle of Tarawa (code name Operation Galvanic) only lasted three days but was listed as one of the bloodiest battles in the 20th century. It was the first American offensive in the central Pacific area. At the end of the three days from Nov. 20 to Nov. 23, 1943, more than 1,100 U.S. Marines lay dead on the beach.
The strategic reason for this battleground, located at the Tarawa Atoll, Betio in the Gilbert Islands at Kiribati in the Pacific Ocean, was for a landing field for American forces to support operations to the Philippines and into Japan. The Marianas Islands were the main point of focus but were heavily defended by the Japanese, so Tarawa would provide an entry base for Americans and a closer supply base during the attack on the Marianas.
Under direction of the Joint Chiefs, Admiral Chester Nimitz planned for his attack on Tarawa. The small flat island was only 800 yards wide and two miles long but filled with 4,800 Japanese defenders and 35,000 American troops.
g g g
In August 1942, after Gen. Evans Carlson raided the Makin Islands, the Japanese command saw a need to defend the Gilbert Islands, so for nearly a year they fortified the island with 500 pillboxes and 14 coastal defense guns that included four large 8-inch Vickers guns. Trenches connecting all points of the island were dug to allow ease of movement should one location be overrun. The Japanese Rear Admiral Shibazaki kept morale high by saying “it would take one million men one hundred years” to conquer Tarawa. The 2nd Marine Division and the Army’s 27th Infantry Division proved him wrong with support from the battleships Colorado and Maryland, which knocked out three of the four Japanese 8-inch guns quickly.
At 0900, the Marines boarded the tracked LVT “Alligators” and the Higgins boats to prepare to storm the beach, but an unknown tide phenomenon called a “neap tide” made landing the Higgins boats impossible. While the Alligators made fairly successful landings, the Marines were stuck in the reef 500 yards off shore. This led Japanese command to pull forces together to take advantage of the Marines’ misfortune. After a three-hour battle the Marines forced the Japanese back, causing a severe break in their line of communication. By the end of the first day, 1,500 American soldiers were either dead or wounded.

g g g
Under the cover of darkness the Japanese were able to set up new machine gun posts between them and the Americans. Naval gunfire reduced many of the gun posts, and the Marines won their battle on this section of the island in under an hour. The 6th Marine Regiment landed in an effort to cut off the retreat of the Japanese. After several small battles, this section belonged to the Americans.
The third day of the battle left the Japanese with nowhere to run but not without going for one last counterattack at 19:30 hours. They managed to sink the aircraft carrier Liscome Bay using a Japanese submarine. This final attempt lasted throughout the night, but the Marines beat back the attack by calling in artillery to within 75 meters of their own lines (dangerously close). This lasted for an hour, and 325 Japanese soldiers were killed.
At dawn, U.S. Navy fighters attacked the eastern tip of the island for 30 minutes. The Marines quickly moved in and killed the remaining Japanese, ending a fierce 76 hours of fighting. Of all the Japanese on the island, only one officer and 16 enlisted men surrendered. American losses were listed at 1,696 killed and 2,101 wounded. Japanese losses were 4,690 killed.
Nearly 500 Marines were never accounted for and are still on Tarawa. In 1946 an excavation team arrived to bring home and identify the dead, but after three months of searching, only about half of the Marines were found. Today, 471 of the Marines killed at Tarawa have been found and buried by name in American cemeteries, with another 104 laid to rest in “unknown” graves at the National Memorial Cemetery of the Pacific in Hawaii.
According to the Department of Defense, roughly 73,000 American service personnel are still missing from World War II. One excellent book recently published by Wil S. Hylton, “Vanished: The Sixty-Year Search for the Missing Men of World War II,” is well worth the reading.

Rodney Cress is a Vietnam veteran and longtime advocate on veterans issues. Look for future articles about other “forgotten battles” of World War II.