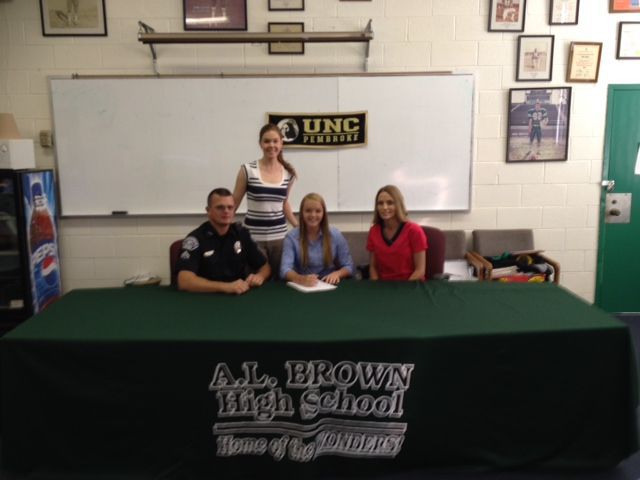 Salisbury’s soccer team won 2-1 at Lake Norman Charter in a second-round 2A game on Saturday.
Kate Grant and Ashlyn Heidt scored the goals for the Hornets.
Salisbury, the No. 12 seed, will be at home next week, probably Wednesday, against No. 13 seed Forbush.
See story online.
• A.L. Brown’s Katelyn Watkins will play soccer at UNC Pembroke.
She’ll be joining her sister, Amber, an A.L. Brown graduate who is a freshman at UNC Pembroke.
Katelyn has played for the Wonders for three years and has played club soccer for 10.
She has overcome two torn ACLs and has taken extra classes at Brown. She’ll be graduating a year early.
A.L. Brown’s soccer team has made the playoffs the last three seasons. The Wonders ended this season with a loss to Myers Park.
Kannapolis opened with a 5-3 win at Concord on Saturday.
Ryan Ashley made a great catch to keep the game tied 3-3 and drove in Kameron Sherrill wit the go-ahead run.
Hayden Taylor was the winning pitcher in relief.
Kannapolis is at Lexington on Monday.

Stallions baseball
The Greater Cabarrus Homeschool Stallions won 7-6 against Forsyth in the state tournament.
Dalton Lankford had two hits. Sawyer Strickland was the winning pitcher.
The Stallions lost 8-3 to Wake County in the championship game.
Lankford and Hunter Shepherd had two hits each. Noah Jarrett and Josh Holt doubled.
The Stallions finished 20-8.

Intimidators baseball
Hickory got homers from Mick Vickerson and Kellin Douglas and beat Kannapolis 4-1 on Saturday at CMC-NorthEast Stadium.
Kannapolis Youth Sports is a football league serving Cabarrus and Rowan Counties, but is in desperate need of funding to continue.
The overwhelming majority of the kids that participate in the league come from single-parent homes, and Chavis Maxwell, who heads the program along with Kannapolis City workers and ministers, strives to provide a positive male influence in their life.
Maxwell has a pretty remarkable story as well, as his son, Kennan, played on the team in 2009 before being diagnosed with leukemia.
To keep Kennan motivated through treatment, Maxwell showed him old game tapes. Keenan received a bone marrow transplant in 2010 and thankfully has been cancer-free since. Keenan is now in high school and volunteers with his dad at Kannapolis Youth Sports.
The program needs to raise $5,370 by 6 p.m. on Friday, May 23.
If they hit their mark, the DICK’S Sporting Goods Foundation will match dollar-for-dollar, giving Kannapolis Youth Sports $11,500.
The third time was the charm for Carrboro on Saturday in the
North Carolina High School Athletic Association’s 24th annual state men’s dual team finals at the Burlington Tennis Center.
Carrboro had earned its way into the 2A championship match for the last two years only to lose in the final, but this time the Jaguars left little doubt by downing Brevard 5-0 for the state crown.
Carrboro swept the five singles matches that were completed, led by number-one player Max Fritsch, who was named the Most Valuable Player of the championship. The Jaguars won their first dual team title and finished 16-2 overall while Brevard lost for the first time in 19 dual matches.
• Raleigh Cardinal Gibbons dispatched Waxhaw Marvin Ridge 6-0 for the 3-A crown, sweeping all six singles matches in straight sets. Robert Kelly of Gibbons, who won the state 3-A singles title last weekend, beat George Lovitt at the number one slot, 6-2, 6-4, and was named the match MVP.
Gibbons won its fourth consecutive 3A crown and finished its season at 25-4 while Marvin Ridge wound up 19-3.
• Raleigh Wakefield rolled to a 5-0 victory over Winston-Salem R.J. Reynolds for the 4-A championship. Bo Boyden, Wakefield’s number-one singles player and the 4-A singles state champion from last weekend’s tournament, beat Bennett Crane in straight sets and was chosen as the MVP.
Wakefield finished a perfect 23-0 dual match season while Reynolds, in the finals for the sixth consecutive year, ended the year at 22-2.
• In the 1A championship, Kernersville Bishop McGuinness won pro set tiebreakers after splitting sets in two of the singles matches, beating Raleigh Charter by a 5-2 count.
Sam McLaughry of Bishop, who won at the number-one singles by scoring a 14-12 tiebreaker victory after splitting sets with Abichiran Baskaran, was the MVP.
East Rowan’s Marshall Shank cleared 14 feet for third place in the 3A state championships.
• Mount Tabor’s boys and Parkland’s girls won 4A state titles on Saturday.

The UNCG men’s golf team finished seventh overall in the program’s first-ever appearance in an NCAA Regional and came up just two shots short of advancing to the NCAA Championship.
UNCG was the only non-ranked team in contention for a top-five showing and returns all seven members of the team next season as this week’s lineup included one junior, two sophomores and two freshmen.
Junior Roy Dixon (Salisbury) led the Spartans Saturday and all week at the NCAA Regionals. Dixon tied for the team-low on the week Saturday with a 1-under par 71.
to finish tied for 15th overall at 2-over par 218 (72-75-71). He was consistent all week, including in round three as he posted 15 par scores to go along with birdies on No. 12 and No. 16, while bogeying on No. 5. He was tied for the team lead with nine birdies in the 54-hole event (Coalson).