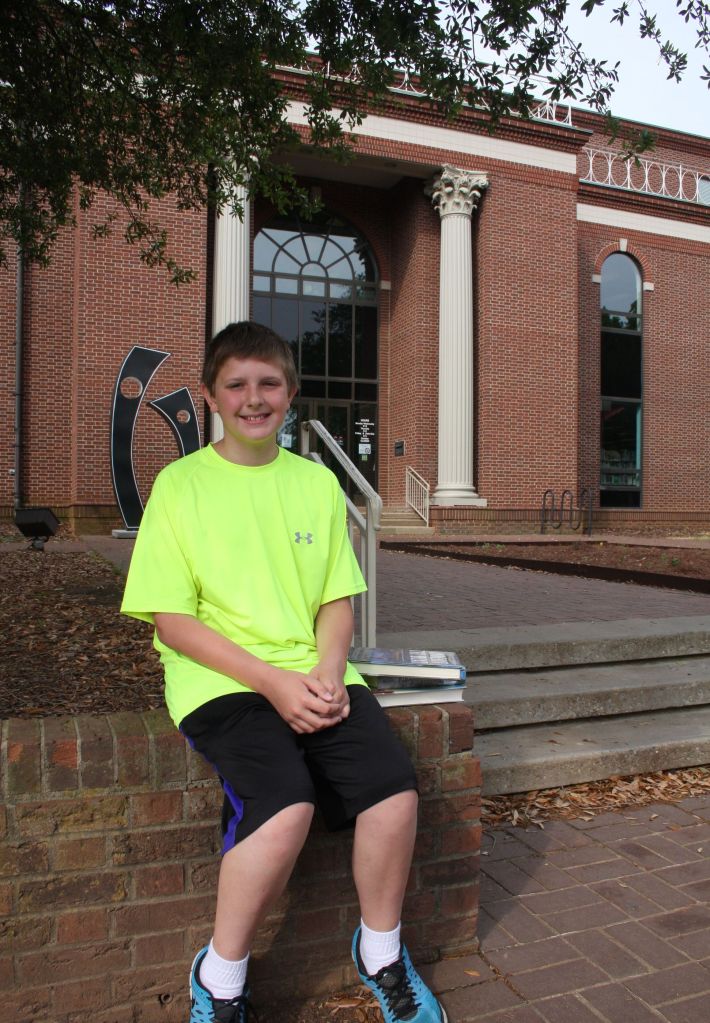 “The only thing that you absolutely have to know is the location of the library.”
— Albert Einstein

“I love books! I know they will contribute to my success in life.”
— Alex Blumenthal

By Susan Shinn
For the Salisbury Post
Alex Blumenthal loves books. So much so, that his librarian at Overton Elementary told the fifth-grader about a library ambassador program sponsored by the North Carolina Library Advocacy group.
To enter the contest, Alex, 11, created a video about why libraries are important to him. (See accompanying sidebar for details about the video.)
In March, Alex was notified that he was chosen as one of a dozen ambassadors statewide, in elementary, middle and high schools.
“I was, like, really, really, surprised,” Alex says.
“Did you scream?” asks his mom, Dr. Jessie Blumenthal.
“Yes!” Alex says.
Alex and his mom were invited to Washington May 5-6 for National Library Legislative Day, where the ambassadors would visit legislators, advocating for libraries. He is also the son of Chris Blumenthal, and his stepdad is Rob Brunory.
This was the first year for the youth ambassador program, according to Dr. Anthony Chow. He is an assistant professor of library and information studies at the University of North Carolina at Greensboro, and co-chairman of the N.C. Legislative & Advocacy Committee.
“Alex’s video was one of the top entries we received,” he says.
He adds that the ambassador program was created and funded by North Carolina Literacy Advocacy “to allow students a voice in terms of why they like libraries and why they use libraries.”
The stereotype that libraries are not as useful in the Information Age is untrue, he adds.
The visits to legislators, he says, facilitated a direct path for students. “We couldn’t be happier with the ways they came across to support the library.”
Alex and his mom got up early in the morning to meet the group in Greensboro. They all rode together by bus to Washington. Alex and his mom had the afternoon free to take a tour. They visited seven war and presidential monuments, as well as the Holocaust Museum.
“We just studied the Holocaust this week,” Alex says.
“We did some of his homework at the museum,” Jessie says.
The next morning, the group again rose early for breakfast before breaking up into teams for their visits to the Capitol. Because May 6 was Primary Day, students mainly met with senior aides.
“The aides are important to talk with because they decide what gets in front of the Congress leader,” Jessie notes.
Alex met with aides from the offices of congressmen David Price and George Butterfield, and also met Sen. Richard Burr himself.
The group also had a rally on the lawn of Congress, where Alex read a short speech.
He said, in part: “Libraries have helped me through the ups and downs of life and they can only continue to help me and all Americans if libraries stay a top priority in the United States.”
“He was so articulate,” Chow says. “I was very, very impressed with him.”
Following the rally, the group took a short tour of the Capitol.
“The dome is under restoration so we didn’t get to see much of the actual dome,” Alex says. They went to Union Station to eat, then made their way back to the Capitol to meet their bus, arriving in Greensboro at 1:12 a.m. the next morning, according to Alex.
He went to school the next morning.
“I think he was excited and wanted to share,” Jessie says.
At Overton, Alex is a member of the school’s Elementary Battle of the Books team, led by his librarian, Emily Shue.
For the competition, team members read up to 18 books “that you have to know inside and out,” Alex says. He read 13 of the books on the list this year. The Overton team placed third in 2013 and first this year in countywide competition.
His mom also read some of the books to help Alex prepare.
“I was humbled and impressed by the team, because I couldn’t remember all these details that they seem to remember,” she says.
Alex is also a member of Boy Scout Troop 443 at St. John’s Lutheran Church. He is preparing to receive his Tenderfoot award. He also likes to play trumpet, and has appeared in two plays at the Norvell Theatre, “Treasure Island” and “Twelfth Night.”
And, he loves books.
Freelance writer Susan Shinn lives in Salisbury.