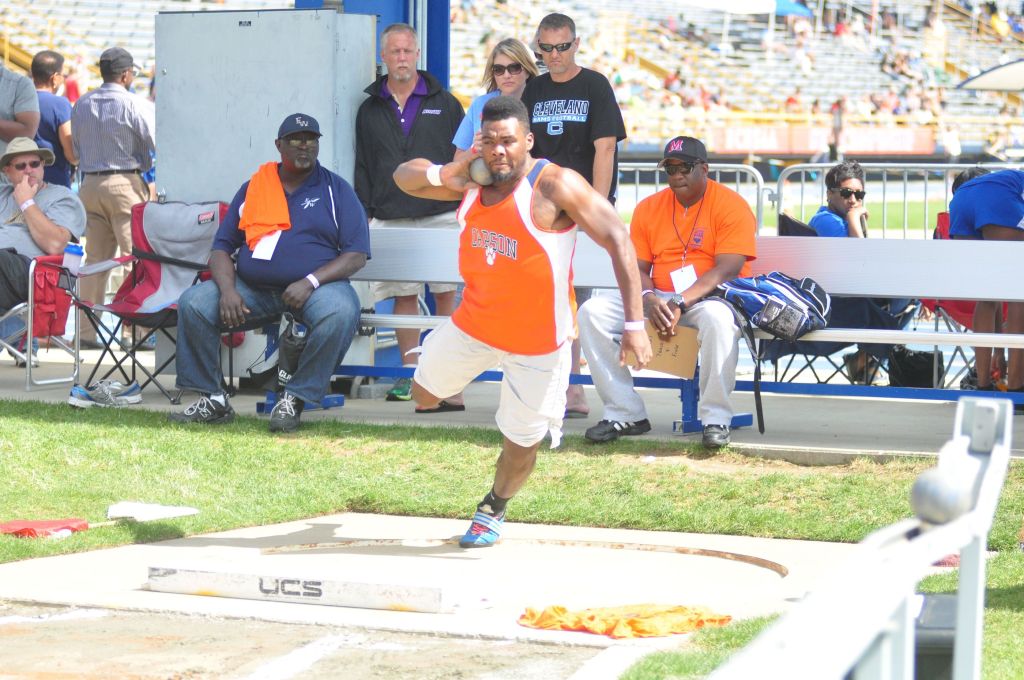 GREENSBORO — MyQuon Stout donned his ‘big meet’ straw hat and looked like he was about to go fishing at Irwin Belk Track during the state 3A track and field championship. Stout wore it during the county and conference championship meets and was hoping for similar luck Friday.
As far as a state championship, Stout got some nibbles and had to settle for second and third places in the throwing competitions. Stout, an Appalachian State football signee, placed in the top three in both the shot put and discus throws Friday to lead a Carson charge that placed the Cougar boys in the top 10 in the state.
“I felt good on some of my throws,” said Stout after throwing the shot put 54 feet, 4.5 inches. “I wished I wouldn’t have scratched some of them. It probably could have changed where I placed.” Stout placed third last year.
Stout threw 167-1 in the discus, 13 feet shorter than he threw in the regional last week. The meet started at 3 p.m. as opposed to 10 a.m. in years’ past.
Carson’s Tre Williams placed sixth in the shot put with a 51-1.5 throw and seventh in the discus with a 145-5 toss. It was the last time Williams and Stout competed wearing a Carson uniform and the last time they made each other better.
“We’ve been throwing together since seventh grade,” Stout said. “We both push each other. It’s good to have my best friend out here.”
The Cougars’ Andrew Hower, the indoor high jump champion, placed fourth after leaping 6-4. Carson wound up with 24 points to finish 10th in the men’s rankings. Fayetteville Terry Sanford was crowned champion with 58 points.
East Rowan’s Taylor Kirk won the wheelchair shot put. Kirk went in hoping to reach nine feet and did at 9-2 on her fourth throw. Kirk was the indoor champion in the winter after tossing eight feet. Kirk predicted she’d be a wreck throwing by herself in front of a championship-crowd. Instead the only thrower in the event reached her goal and then some.
“I wasn’t as nervous as I thought I would be,” Kirk said. “On the best throw I thought about my grandma who passed away recently and that helped me.”
East’s Brittany Small and Tori Gaul led the Mustang girls with top three placements.
Small, a sophomore, was second in the high jump at 5-6 after being seeded fourth. Small, who leaps high above volleyball nets during the fall, wants to eventually break the school record of 5-7.5.
“I felt a whole lot better because I finished better than what I was seeded,” Small said. “I did a whole lot better than last year.”
Gaul, who starred at the regional by setting a school record in the pole vault, cleared 10 feet for the second straight time. Gaul was third in the 300-meter hurdles in 45.25 seconds.
West Rowan had several top five finishes. Raykwon Torrence set a personal best time in the 110 hurdles and finished fourth in 14.9 seconds despite stumbling over a hurdle early. Torrence said he had his eye on Nash Central’s Damian Silver, who won in 14.28.
“I was trying to keep up with the guy that got first place,” Torrence said. “I felt the run was pretty good. I just had to figure out how to get my trail leg up.”
Khaila Hall guided West’s girls in the jumps, placing third in the triple jump (37-1), not far behind champion Lydia Laws of Western Alamance. Hall, a sophomore, was fifth in the long jump with a top jump of 17-1.5
West’s Chris Patterson was fifth in the triple jump (44-5), earning the Falcons four points.
East’s 4×800 relay team (Darin Basso, Jason Basso, Josh Rowell, Conor Honeycutt) placed 15th. East brought its 4×200 boys relay team, but was disqualified after a lane violation.
South Rowan’s Dakotah Lambert tied for sixth in the pole vault with a 10-foot jump. Lavon Hill participated in the high jump for the Raiders, placing 11th after jumping six feet.