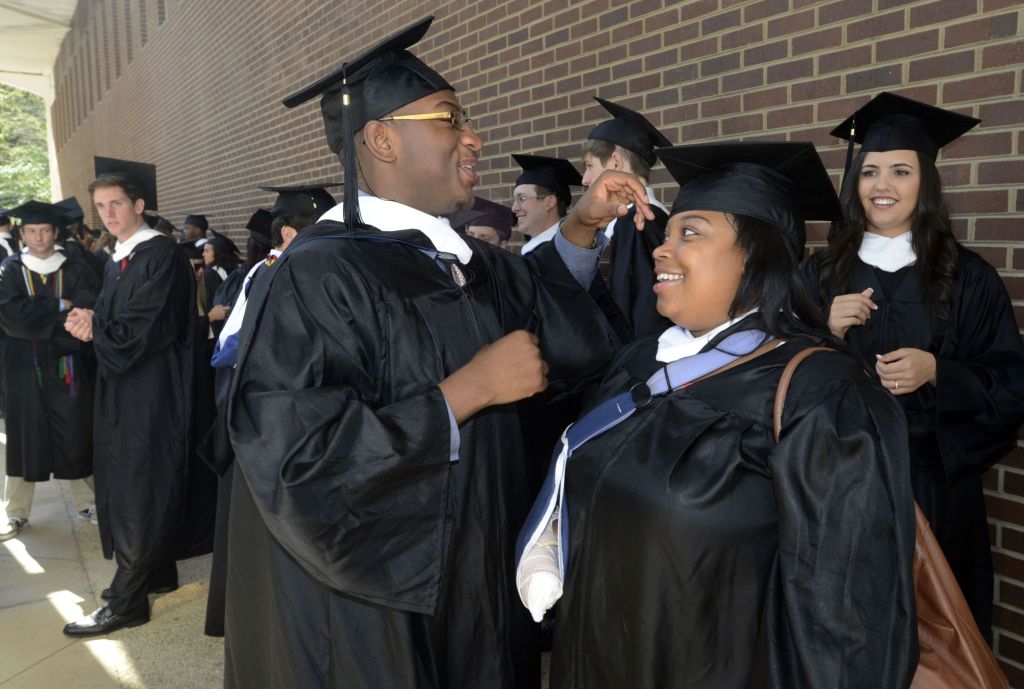 SALISBURY — It was a morning of new beginnings.
It was a ceremony full of singing and laughter, congratulations and tears — punctuated by shouts and a few blasts from an illicit air horn someone snuck into the auditorium.
Catawba College awarded a total of 287 degrees in two ceremonies Saturday — one for day college students and one for evening students — according to college spokesperson Tonia Black-Gold.
Having been “found worthy and recommended,” in the ceremonial words of Catawba College President Brien Lewis, the graduates at Saturday morning’s ceremony were challenged to continue pursuing their dreams.
“Now, judging by the activities and accomplishments of your years at Catawba, you are indeed a generation in motion, a generation that will shape the future,” Lewis said. “You will not be shaped by it.”
“Please know that Catawba believes, and will always believe, in the beauty of your dreams,” Lewis said.
It was a solemn ceremony – with a few lighthearted asides, as when one student took a photo with the president as he was getting his degree.
“My first selfie,” Lewis said after all the degrees had been conferred.
A short time later, as Lewis talked of further accomplishments of the Class of 2014, he did what many college presidents do: He offered some words of advice from a famous individual.
In this case, the Jedi Master Yoda, from the “Star Wars” films.
“You may imagine what awaits you, but you never really know,” Lewis said.
Or, as Yoda would put it, “Always in motion, the future is,” Lewis said, giving his best impression of the green alien’s voice, to rousing applause and cheers from the audience.
On a more serious note, Lewis spoke of accomplishments from alumni such as Richard Steiner, who returned to campus after he graduated to provide dance workshops for students.
The result, Lewis said, was an opportunity for Catawba students to learn some of what professional dancers know.
Lewis challenged graduates to continue learning and to pass on the knowledge they have gained, “and we will celebrate proudly with you as you achieve your highest potential.”
After the ceremony ended, families met outside Keppel Auditorium for photos at landmarks on campus, while others shared lemonade and refreshments on the lawn.
For Spencer Ann Bowden, of Salisbury, commencement is a milestone on a longer career in education.
Bowden, whose grandfather also graduated from Catawba College, earned a bachelor’s degree in Music Education.
“I’m student-teaching in the fall in Cabarrus County,” Bowden said.
Asked how she was feeling on graduation day, Bowden said, “It’s just amazing. It’s hard to believe it’s already here.”
And the tradition will continue, Bowden said: “My little brother will be a freshman here in the fall.”
Daniel Couchenour, of Fort Mill, S.C., was awarded a bachelor’s degree in Environmental Science with a minor in Secondary Education.
While he and other students gathered for a photo outside, Jay Bolin, assistant professor of Biology, came over to pay his respects.
Bolin praised Couchenour and other graduates. “It’s just a standout class,” Bolin said. “… Each graduating class is stronger and stronger.”
As for himself, Couchenour said he was looking forward to finding a job and starting his adult life in earnest.
“A lot of kids are afraid to grow up,” Couchenour said. “I’m no longer a fake adult … I’m ready to be a real adult.”
For Megan Varnadore, going in to the ceremony made her “really, really nervous.”
And afterward, with degree in hand and family close by, the process of saying goodbye to so many of her friends and peers was “just a bit heard-wrenching,” she said.
Varnadore was joined by her parents, Cathy and Michael Warren, and her sister, Marissa Varnadore.
“I’m just so proud of her,” Cathy said.
Megan, Cathy said, is a cancer survivor and a hard worker who has overcome a lot on her journey.
And like her daughter, Cathy said she was “thinking about all the things she’s going to miss, changes that are getting ready to happen.”
Many students, Varnadore included, said cafeteria food was at the top of the list of things they would not miss about college life.
For Buffkin, a native of Chadbourn, graduation means staying close to Salisbury. He said he’s rented a house nearby and is looking for work.
Buffkin said his fellow students are “incredible people,” naming off a number of students and their accomplishments in athletics as well as in the classroom.
Those are the people who will lead the country into the future, Buffkin said – young people “with fire under our feet, and we’ve got plenty of them.”
Others leave Rowan County for journeys elsewhere.
Domhnall Minogue, a native of the town of Greystones in County Wicklow, Ireland, will leave Salisbury for Charlotte as he searches for a job.
His parents, Seamus and Vivienne Minogue, flew to the U.S. from Ireland for their son’s commencement.
“Very proud that’s he’s had such a great time here, and very grateful to the college for making him feel so welcome,” Vivienne said. “He’s been adopted by a lot of people in our absence.”
Minogue, who graduated with a bachelor’s degree in Business Administration, plans to live in North Carolina and work here, if possible.
“This place has been home,” he said.
As a student-athlete with a soccer scholarship, Minogue said he wouldn’t miss the 5 a.m. practices. “I don’t mind class, eight o’clock’s fine,” Minogue said, “but five o’clock?”
The Class of 2014 enters a world of uncertainty, but in their own words, the graduates of Catawba College are ready to start the next chapter, no matter what awaits them.