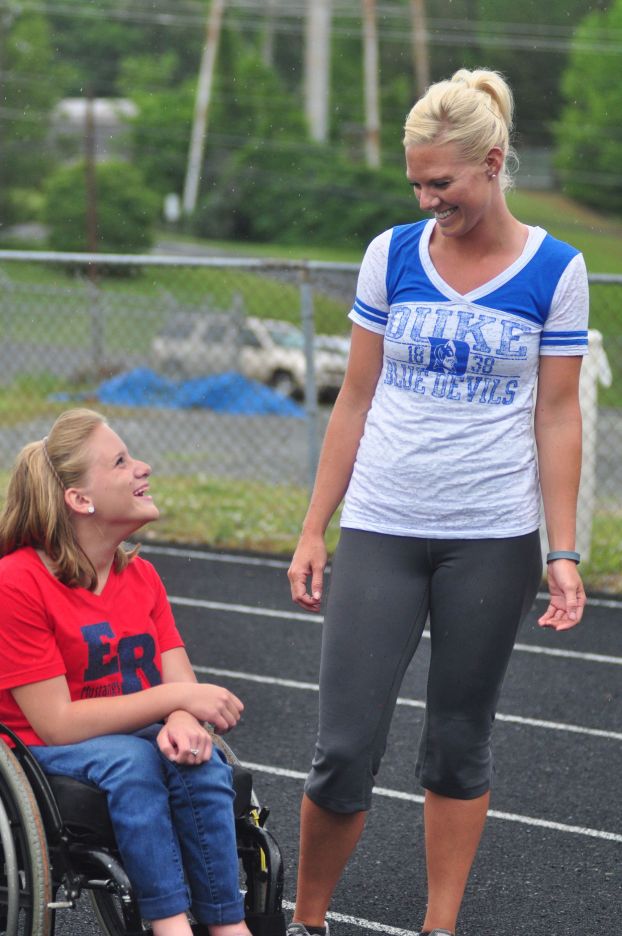 GRANITE QUARRY — East Rowan’s Taylor Kirk has been confined to a wheelchair since youth. For now, freshly turned 16-year-olds like her are starting to wreck havoc on four wheels.
Despite her handicap, Kirk is maximizing her abilities on two wheels. The state 3A outdoor track championship will include Kirk today at Irwin Belk Track at N.C. A&T. She’s the only participant in the wheelchair shot put which means she’ll be recognized as a state champion but that doesn’t drain her competitiveness.
The sophomore truly is one of a kind.
“It makes me feel really good to know that I change peoples’ lives,” Kirk said Thursday afternoon from East’s football stadium. “Even though I don’t mean to.”
Kirk threw 8 feet to win the indoor track state meet in February. She holds the indoor record at 8 feet, 5 inches.
“She’s exceptional,” said East track coach Rebecca Cooper, who threw the javelin at East Carolina. “She comes out here everyday and works just as hard as everybody else.”
Kirk wants to reach 9 feet today as she’s done in practice for the past few weeks. She enters the day seeded with a throw of 8-6.5. 8-5 is the indoor record she holds. Nine feet ‘or over’ would be good to hit by the end of the year.
“I’m pretty confident because I know I’m going to win either way,” Kirk said.
From third grade on, Kirk has been in a wheelchair. Kirk had pressure sores when she was young and was put temporarily in a wheelchair when the sores worsened. Her knee joints then began to grow together. Kirk says she’ll need surgery on both knees in order to walk again.
Her mother encouraged her to get involved in shot put as a means of normalcy. In middle school, a teacher helped her catch on and it’s been a part of her since.
“She didn’t want me to feel like I’m different,” Kirk said. “I’m not, but I am at the same time.”
To get to the throwing circle down on the football field, Kirk has to wheel around the fence surrounding the stadium through the adjacent parking lot and into the entrance beside the utility shed. Sometimes Cooper or assistant Laurie Wyrick guides her down the hill. Jason Barnes is another track coach who speaks highly of Kirk.
Her peers say her spirit isn’t dampened by the disability.
“She’s always happy and I’ve never really seen her upset about anything,” Cooper said.
Sister Kayla Kirk played softball, volleyball and track while at East. Taylor supports all the sports as much as she can and can often be seen at baseball, softball and basketball games.
“She comes out here every day and works just as hard as everybody else,” Cooper said. “I don’t see her as any different. The girls love being around her. She definitely inspires the other girls and inspires the coaches to get out here and do this.”
Senior shot putter Jason Shuping helped Kirk develop a throwing motion suitable to her. She tosses it sidearm and throws it with the same vigor most everyone else does.
“The only thing that was really hard was getting the technique of how to throw it,” Kirk said. “If you don’t throw it a certain way you could hurt your wrist really bad.”
East senior Connor Johnson, a pitcher on the baseball team in the midst of a 9-0 season, is Kirk’s favorite athlete. They’ll talk about how each other’s performance went and pick each other up. They’ve been equally as successful this year.
“The next day, he always asks me how I did that day,” Kirk said. “He says to keep working it and I’ll get better. It actually helps me to know somebody believes in me like that.”
Students and faculty at the school have encouraged Kirk in her pursuits and will be cheering her on from Granite Quarry.
“I love this school more than anything,” Kirk said. “It’s like my second home.”