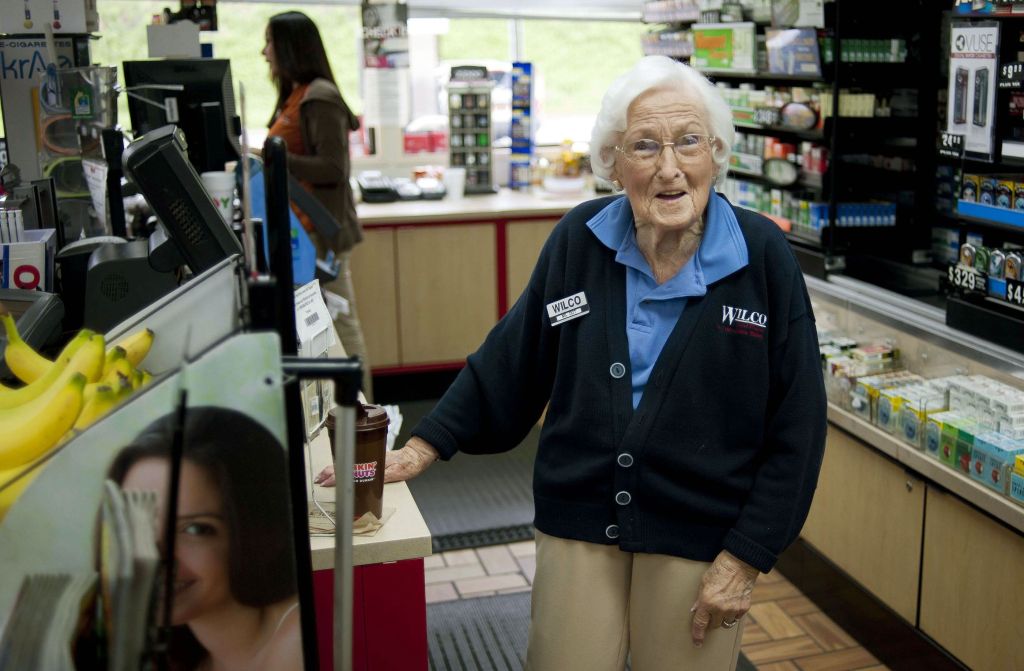 SALISBURY — “Miss Dot” — that’s what everybody calls her — will ring up your gas purchase or sell you cigarettes, lottery tickets, Mountain Dew and Doritos.
From behind her counter at the Wilco/Hess Travel Plaza along Interstate 85, she calls everyone “Honey.” And regular customers make it a point to look for her, as she works four days a week, 7 a.m.-3 p.m., standing throughout her shift.
Dorothy “Dot” Gudger isn’t your typical travel plaza worker. First of all, she’s 88 and a great-grandmother whose main complaint is osteoporosis.
Second, she can’t help but be friendly to all her customers, even the ones who might be gruff, surly and having a bad day.
“She’s extremely sweet,” coworker Heather Keaton says, “but she will tell you exactly what she thinks in a skinny minute.”
General Manager Richard King says he couldn’t ask for a better employee than Miss Dot. She’s dedicated and always on time.
“She really does a good job,” King adds. “That’s why she’s here.”
Most people Gudger’s age have been retired upwards of a quarter of a century. So why does she keep working, when she could be spending leisurely days at home tending her flowers and not waking up daily at 4:45 a.m.?
“Because I like people, and I like being busy,” Gudger says.
She also thinks her regular job — she has been at the travel plaza 15 years — helps her brittle bones, and just staying active, she says, is probably extending her life.
“I can’t do much,” she adds, “but I waddle around, go out and straighten shelves and wipe off a counter.”
Gudger drastically undersells herself. She’s responsible for all the gas sales on her side of the counter and is constantly watching the pumps, besides ringing up store purchases.
Gudger has never been able to shake her work ethic.
Her work history also includes 31 years at Cannon Mills Co., 15 years at Pilot Insurance and downtown Salisbury jobs as a young woman at Woolworth’s, Kress, the Yadkin Hotel and Malone’s.
“I’ve worked all my life,” Gudger says matter-of-factly. “It’s something to do.”
Gudger is a little more amazing when you realize she didn’t learn to drive a car until she was 65 years old, about the time of her husband Robert “Bub” Gudger’s death.
“I didn’t have much trouble,” Dot says. Now she drives her Buick Century back and forth to work, to the hair and nail salon and out to eat.
She loves seafood at Blue Bay, pancakes at IHOP or ribs at Wink’s.
“He has the best ribs of anybody, I think,” Gudger says.
Neighbor and friend Frances Ballard says Gudger is independent, strong-willed and strong-minded, besides being the sweetest, most loving and caring person she knows.
“She’s a jewel if there ever was one,” Ballard says.
At one time, Dot also was a pretty good bowler, often competing on a women’s team sponsored by Underwood’s ladies clothing store. Again, she undersells her abilities.
“I won a couple of trophies,” she says.
Dorothy Martin Gudger grew up in Salisbury and graduated from Boyden High School in 1942. She and Bub eloped one Sunday morning in November of 1942, when Bub knew he already had been drafted for World War II and had instructions to report to Camp Croft, S.C., in February 1943.
Dot, 17 at the time, dressed in a powder blue suit as though she were going to church, but she never showed up. She jumped in a car with Bub and his aunt, and they drove to York, S.C., to be married.
When they returned to Salisbury, the newlyweds boarded in a room upstairs of a cousin. Dot already was working at Woolworth’s, and after the war, in which Bub was a U.S. Army truck driver in Central Europe, he would have a long career in textiles, mostly at Cone and Cartex mills.
The couple had one son, Wayne, a Catawba College graduate who has lived in Florida for many years. Back in the 1960s, after living in Meadowbrook, the family moved into one of the first houses in Briarwood Terrace off Airport Road, and that’s where Dot still calls home.
Bub Gudger died from diabetes in 1990.
In her own long career at Cannon Mills’ Plant No. 1 in Kannapolis, Dot worked as a bookkeeper and later in the supply house.
For Pilot Insurance, she also kept books and greeted customers from behind a counter. The downtown insurance office was located in the old Wallace Building, known today as The Plaza.
As a young girl, Dot says, she always had aspirations to be a nurse but soon learned she didn’t have the stomach for it.
“I’m real tender when it comes to somebody suffering,” she says.
Ballard says Gudger did a lot as a young woman in helping to care for a brother with polio and, later in life, looking after a sister.
Gudger had five brothers and sisters, all of whom have died.
At home, Gudger prefers religious programming on television, loves flowers and, when she feels up to it, attends Neel Road Baptist Church. Her living room is filled with photographs of family, including two grandchildren and four great-grandchildren.
They call her “GiGi.”
At work, Gudger wears a dark blue shirt, set off by her brilliant white hair. Her name tag says “Ms. Dot.”
“A lot of people ask if that stands for D-O-T, Department of Transportation,” Gudger says, chuckling.
One of her traveling regulars, John Buckner of Concord, stops in for gas and to buy some lottery tickets. Ron Hicks of Charlotte, a weekly visitor, says hello to Miss Dot and pays for his coffee and doughnuts.
Gudger says she’ll keep working as long as she’s able.
“If she were to leave,” Ballard says, “they’d lose a big part of their business.”
Miss Dot refuses comment on that observation, but she acknowledges one thing, and she’s not underselling it:
“I have a lot of friends.”