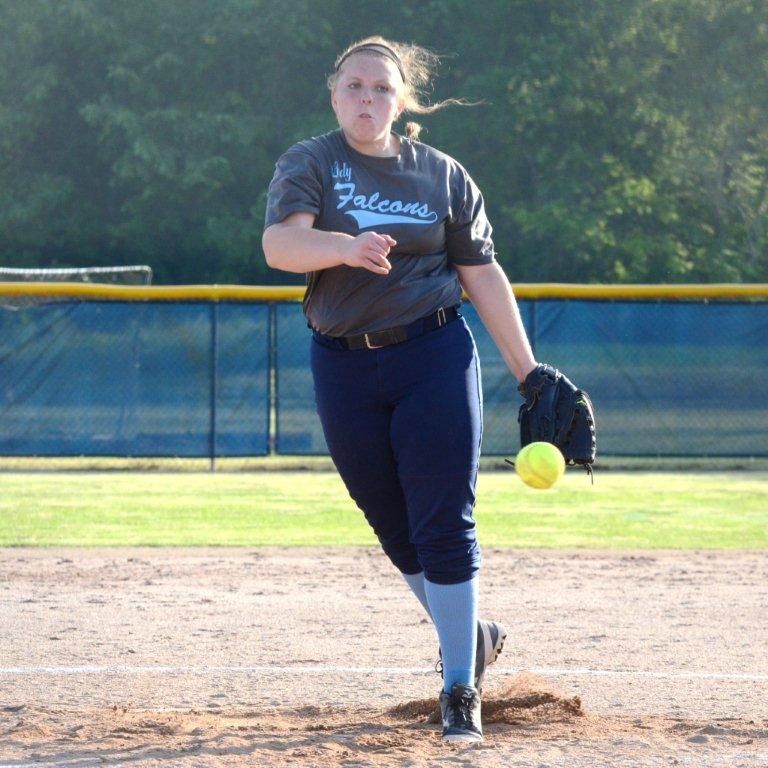 MT ULLA — A rare umpire call reversal and a bloop single gave the West Rowan girls the boost they needed Wednesday night in the first round of the State 3A softball play-offs. The Falcons broke open a tense pitcher’s duel in the bottom of the fifth by scoring all of their runs to claim a 4-0 win over South Iredell.
With West’s Peyton Greene and Viking pitcher Gretchen Sherrill posting nothing but goose eggs into the fifth, the Falcons finally found a way. A one out walk to Cassidy Nooner was followed by a perfect sacrifice bunt by freshman Savannah Cline toward third base. The throw to first barely beat Cline but the umpires got together and conferred for a moment before reversing the call, saying the first baseman came off the base.
Was it the right call? “I have no idea,” said Cline who was pressed into a starting roll for the game with senior Leah McCoy absent due to a family matter. “I was just paying attention and running hard straight through the bag. But I was glad they changed it.”
Instead of two outs and runner on second, West had two runners on with one out. A walk to lead-off hitter Taylor Martin loaded the bases to bring up slugger Hunter Gibbons. Up to that point, West had been held hitless by Sherrill but Gibbons reached out and blooped a single into shallow left field. When the ball got past the fielder just a few yards, the heads up Falcons plated three runs with Gibbons standing on third. A ground out to first by Marisa Yow brought in Gibbons to make the score 4-0 and that was all Greene and the Falcon defense would need to wrap up the first round win.
“That’s the way we do it,” Falcon head coach Jimmy Greene said,” We only have a couple of players that can drive it with power so we can actually score two or three runs sometimes and not draw grass. It was definitely a huge win for us because I knew they were going to be really good.”
The win improved top seed West Rowan to 18-5 and moved them into the second round of the 3A West bracket against either Piedmont or Fred T. Foard, That game will be played either Friday or Saturday evening at West. The Vikings ended their season at 4-16 with an eight game losing streak but proved they were much better than their record in the tough North Piedmont 3A-4A conference.
“We came out here and gave it our all,” South Iredell Coach Allison Mashburn stated. “West Rowan played really well but I am proud of my team and the effort we gave.”
Mashburn said the call reversal and the walks in the fifth inning were definitely critical but “we still have to come out and play defense and put the bat on the ball.” Mashburn did plead her case with the umpires on the reversed call to the point where she was ejected and spent the rest of the game on the team bus just outside the ball park.
With the Falcon offense struggling they needed a solid effort from their sophomore hurler Greene to keep their hopes alive. She responded with a very efficient 85 pitch effort, allowing just two hits, striking out seven and walking none. She threw 77% of her pitches for strikes as she improved her record to 12-2 for the Falcons.
“I felt really good today,” Greene said,” and it is always good when you don’t have to work too hard and overthrow your arm. I knew my team had my back even though the score didn’t show it. I knew it was coming and I never doubted it.”
The only Viking hits were a second inning double to center by Crissy Bass and a line single to left in the sixth by Taylor Little.
Their biggest threat actually came in the top of the seventh when a booted grounder and an errant throw by West put runners on the corners with one out. But Greene fanned KP Poston then got Kennedy Volin to ground out to second base to end the 4-0 win.
“We are going to have to hit better than that,” Gibbons stated after her game winning single. “A lot better than that. I guess we weren’t used to the speed by their pitcher (Sherrill). We haven’t seen that kind of pitching speed in our conference at all.”
Sherrill did take the tough luck loss as she allowed only the Gibbons hit in the fifth and a bunt single by Cat Whitley in the sixth. But she hurt her own cause by issuing four walks including two in the decisive fifth inning.
Second baseman Martin led a stingy Falcon defense with six put-outs and three assists.
The second round playoff game was originally set for Saturday but Greene said he was going to attempt to get it moved back to Friday since Saturday is prom night at West Rowan.
South Iredell 000 000 0 — 0
West Rowan 000 040 x — 4
Pitching: Peyton Greene W (12-2), 7 K’s 0 walks, two hits. Gretchen Sherrill L, 4 K’s, 4 BB two hits, two earned runs.
Leading Hitters — West: Gibbons 1-2, 2 RBI; Whitley 1-3. Yow 1 RBI. SI: Bass 1-3 (double); Little 1-3.