Senior boys have a ball 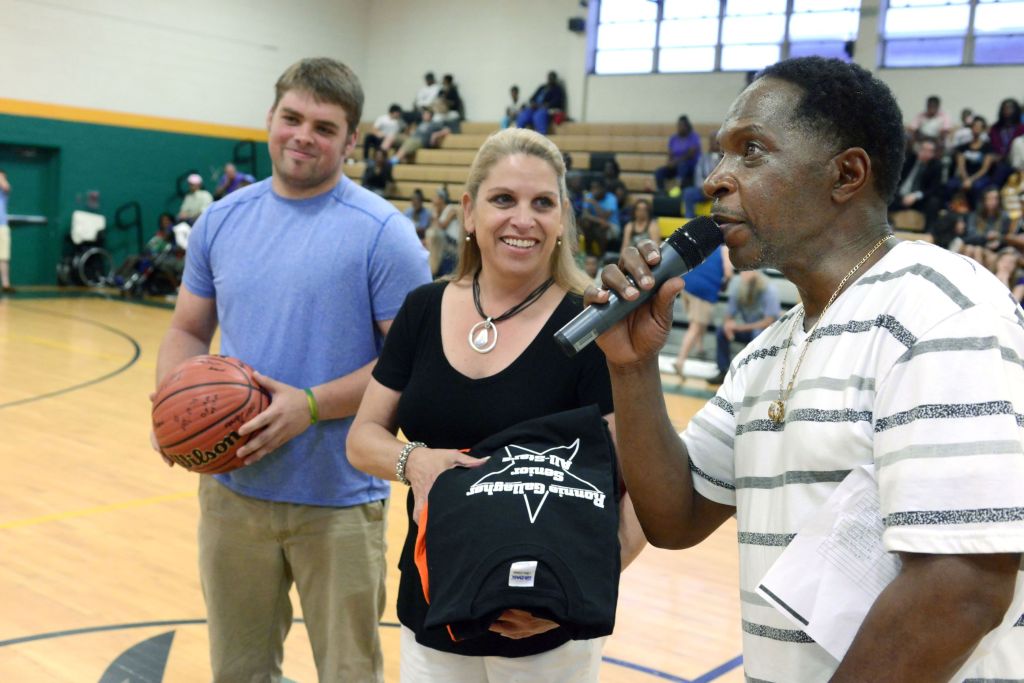 SPENCER — Take 21 of the best high school basketball players from Rowan County and the region, put them on the court and tell them to go at it for 32 minutes.
As expected it turned into a high flying showcase with lots of dazzling offense, very little defense and just pure fun.
But it also was a special tribute.
The annual Senior All-Star boys basketball game was held at North Rowan High Friday night with the primary purpose of showcasing the stars of the class of 2014 one last time.
But the event took on a special meaning this year because it honored the memory of and many special contributions to high school athletics by the late Ronnie Gallagher. He was the longtime Salisbury Post sports editor who died unexpectedly last August 30, the opening day of the high school football season.
The Ronnie Gallagher Memorial Senior All-Star basketball games for boys and girls will be a fixture going forward as one of numerous honors that have been bestowed on him.
Event organizer Andrew Mitchell, North Rowan Coach plans to use the games to raise funds for an annual scholarship in Gallagher’s memory.
“The guys had fun but we just wanted to do something special for Ronnie,” Mitchell said. “I was very pleased with the way everything went.”
At halftime of the boys’ game, Gallagher’s wife Joan and oldest son Jack were honored at midcourt. They were presented with autographed basketballs from all of the players, game tee-shirts and a portion of the proceeds from the game as a tribute.
For the record the Orange team pulled away from the Black team in the second half to win the game 93-82 and almost every player that participated had their one shining moment at some point.
The 15 Rowan seniors were joined by three top players from Winston-Salem Prep, the three-time State 1A champs. Davie High’s Peyton Sell turned out as did Justice Cuthbertson of Westchester Country Day in High Point.
W-S Prep’s Aaron Lipscombe put on a three point show with 24 points while 6-7 Coy Simmons had 16 and 5 monster slams. Rowan players with exceptional play included Michael Bowman, Dalton Nelson, Kenyon Tatum and player of the year Michael Connor. Carson’s Tre Williams put on a show as did South ‘s Shawn Spry, West Rowan’s Seth Martin and Najee Tucker. All of the players had a fun time but also noted the special tribute to Gallagher.
“It meant a lot playing for Ronnie,” West’s Martin stated. He and Ronnie’s son Jack have been friends since chidhhod and their families were close. “It was a great experience.”
Falcon senior Najee Tucker, headed to UNCC on a football scholarship had fond memories as well. “He always had a smile on his face and was good to all of us. “ he said. “I am glad we could honor him in our senior game.”
“It was a great game and I loved it.” Carson’s Williams said. “Ronnie was always wanting to write the best about us and actually cared for us and how we all were doing. He was a great man.”
North’s Connor, who started the Gallagher tributes last fall when he had “RIP Gallagher” razor cut into his hair said the game had special meaning to him as well.
“It meant so much and is a memory I will never forget. It was special playing in this game,” Connor said.
North’s Bowman, headed for JC Smith University next fall, remembered Gallagher also. “Ronnie was a special man in this community,” he said. “I would see him at so many of our games and had a couple of interviews with him. I just pray his family can carry on their lives without him.”
All of the tributes and recognitions were not lost on the Gallagher family, not just Friday night but back in football season, during the Moir Christmas tournament and in many other ways.
“All of this means so much to us because it really goes above and beyond anything we could have thought,” stated Jack Gallagher. He played in the senior game last year and has just finished his freshman year as a football player and student at Methodist College. “He had great relationships with the coaches and that carried over to the athletes as well. It is really obvious that everybody liked him because he could relate so well to them plus he knew the sports.”
Joan Gallagher kidded that she did not realize she had been married to such a great guy but was clearly grateful for the many tributes. “He really was loved by this county and he really loved his job and he loved all of the athletes,” she said. ““Everybody wants to leave a legacy but I don’t think Ronnie would ever imagine this would be his legacy. It is very special to me and the boys.”