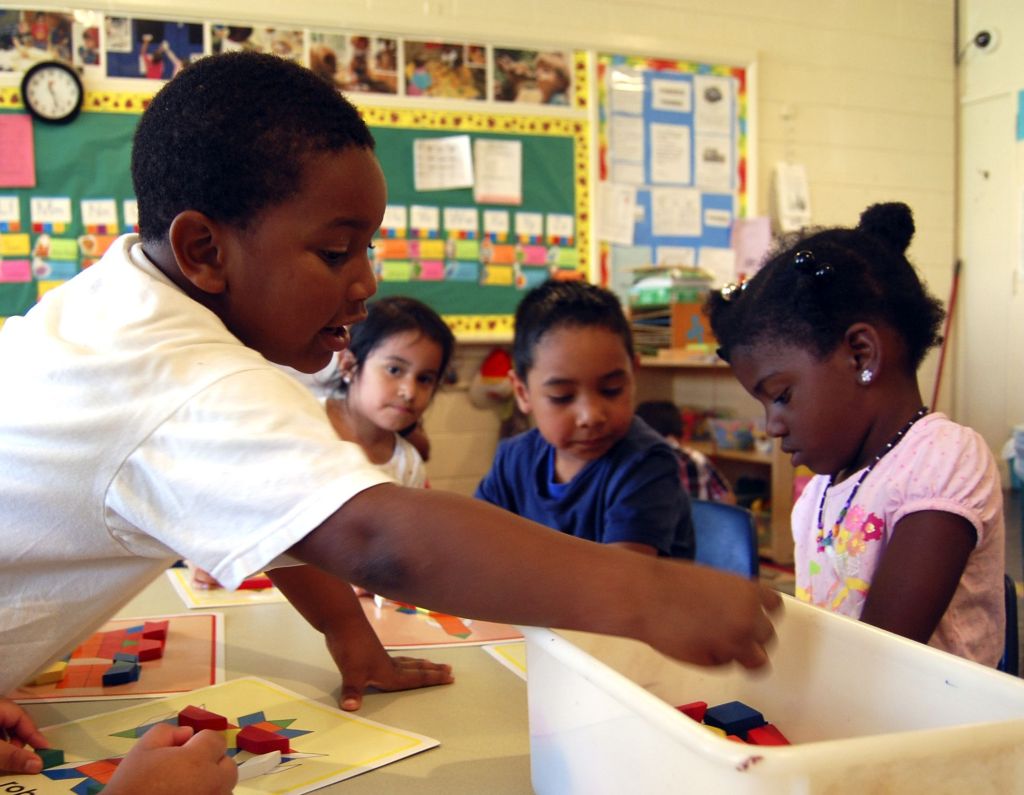 SALISBURY — As they trace rocket ships, flower bouquets and other patterns with little wooden shapes, the 4-year-olds in Kimberly McGraw’s classroom have no idea that Price Headstart Center owes its start to a law passed 50 years ago.
As part of his War on Poverty, President Lyndon B. Johnson signed the Economic Opportunity Act in 1964. The legislation created a variety of programs, including organizations called community action agencies. The Salisbury-Rowan Community Action Agency was one of those established to address local poverty problems across the country.
Today, the Salisbury-Rowan agency has a $11.1 million budget, 300 employees and operates a variety of anti-poverty programs in Rowan, Cabarrus, Davidson, Montgomery, Moore and Stanly counties. While Headstart is the most well-known, the agency also offers programs and services in family self-sufficiency, career education and training and weatherization to make homes energy efficient.
The agency works to empower low-income families and serve as a key to addressing poverty. There are more than 1,000 community action agencies across America that try to help 20 million low-income people and families achieve economic stability and improve their lives.
May is National Community Action Month, and the Salisbury-Rowan Community Action Agency will celebrate its 50th anniversary with a birthday party from 11 a.m. to 3 p.m. May 30 at the Salisbury headquarters, 1300 W. Bank St. Activities, food, music and fun are all free of charge for the whole family.
The Salisbury-Rowan agency helps people overcome a variety of financial and personal challenges, Executive Director Stan Wilson said.
Wilson pointed out several local success stories, including Joy McEntyre Blakeney, a Headstart alum who graduated from the University of North Carolina at Charlotte with a master’s degree in nursing and now works at the Salisbury VA Medical Center.
Candace Miller, who entered SRCAA’s Youth and Family Services program, went on to become an entrepreneur and started her own company, Southern Charm.
Shaqueal Edwards worked with SRCAA youth development specialists and received his GED and was accepted into the business program at Kings College.
“In the last 50 years, Community Action has been extremely successful helping people achieve and maintain economic security despite experiencing budget cuts, shrinking resources, and increased demands for services during challenging economic times,” Don Mathis, president and CEO of the Community Action Partnership national office, said in a news release. “We understand our residents’ unique needs, and have developed programs that will best serve them and their families.”
A study released in April showed that North Carolina’s state-funded pre-kindergarten programs produced better-than-expected results.
Significant gains were seen across all areas of learning including language and literacy skills, math skills, general knowledge and social skills, according to the report, 2012-2013 Children’s Outcomes and Program Quality in the North Carolina Pre-K Program.
“Children are progressing at an even greater rate during their participation in N.C. Pre-K than expected for normal developmental growth,” senior scientist Ellen Peisner-Feinberg, who leads the research team at the University of North Carolina’s Frank Porter Graham Child Development Institute, said in a news release.
In addition, preschoolers with lower levels of English proficiency made greater gains on standardized tests than their peers for some skills, suggesting that the program is especially beneficial for such children, the report said.
Each year, the Salisbury-Rowan Community Action Agency’s Headstart program serves 82 children in Rowan and Stanly counties.
Contact reporter Emily Ford at eford@salisburypost.com.