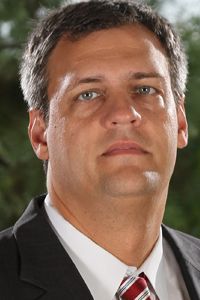 You could say Rob Perron has been around the Catawba program.
Be it at Newberry, St. Andrews, Pfieffer or Charlotte, Catawba has always been within earshot. Perron made his pitch and the Indians listened, hiring him to be head men’s basketball coach Thursday.
“My footprint has been around this area for a while,” Perron said Thursday afternoon. “I’ve always had my eye on Catawba as a neat place to coach. I think it’s an easy place to sell.”
Perron was the recruiting coordinator and associate head coach at Newberry last year. The Wolves, led by head coach Dave Davis, ranked second in the nation in Division II scoring, netting 90 or more points 15 times. Newberry went 19-9, finishing fifth in the SAC.
The Indians are coming off a 7-19 season that included a 7-15 mark in the South Athletic Conference. One of those wins came against Newberry, a 98-96 double-overtime thriller.
“I remember scouting them last year,” Perron said. “We have some pieces. We’ll have to do more right. We’ll have to play harder. We’ll produce a culture and guys will buy in. We’ll do fine.”
Perron worked with Davis at Pfeiffer for three seasons and helped the Falcons to a 81-37 record. During that time, Perron recruited South Rownan’s Damien Argrett, who went on to play in Europe.
“I’m kind of used to recruiting this area,” Perron said. “I think you can pull from a lot of different places.”
He also spent time at Charlotte as the Director of Basketball Operations. Perron was with the 49ers under Bobby Lutz and current coach Alan Major from 2006-2012.
Perron is Catawba’s 12th coach in its history. Perron takes over for Chip Baker, who coached the last 20 seasons. In addition to Argrett, Perron helped bring All-Americans Rico Greer and DeMario Greer, brothers from Charlotte Harding High.
At St. Andrews, Perron was the head coach from 2002 to 2005. He took a 2-25 team to the Carolinas Virginia Athletic semifinals in his first season.
“I feel like we’ve gotten better everywhere I’ve gone,” Perron said.
A native of Faribault. Minnesota, Perron came to North Carolina to play for St. Andrews in the mid 90s. His college career included over 1,100 points and 700 rebounds at SA and Normandale (Minn.) Community College as a 6-foot-5 post player.
Perron is married to wife Stephanie and has two children.
“When you look at the two conferences I’ve coached in, Salisbury seems like a real city,” Perron said. “It’s funny because I used to hate Catawba because they were our rival at Pfeiffer. Your rivals usually end up making you better.”