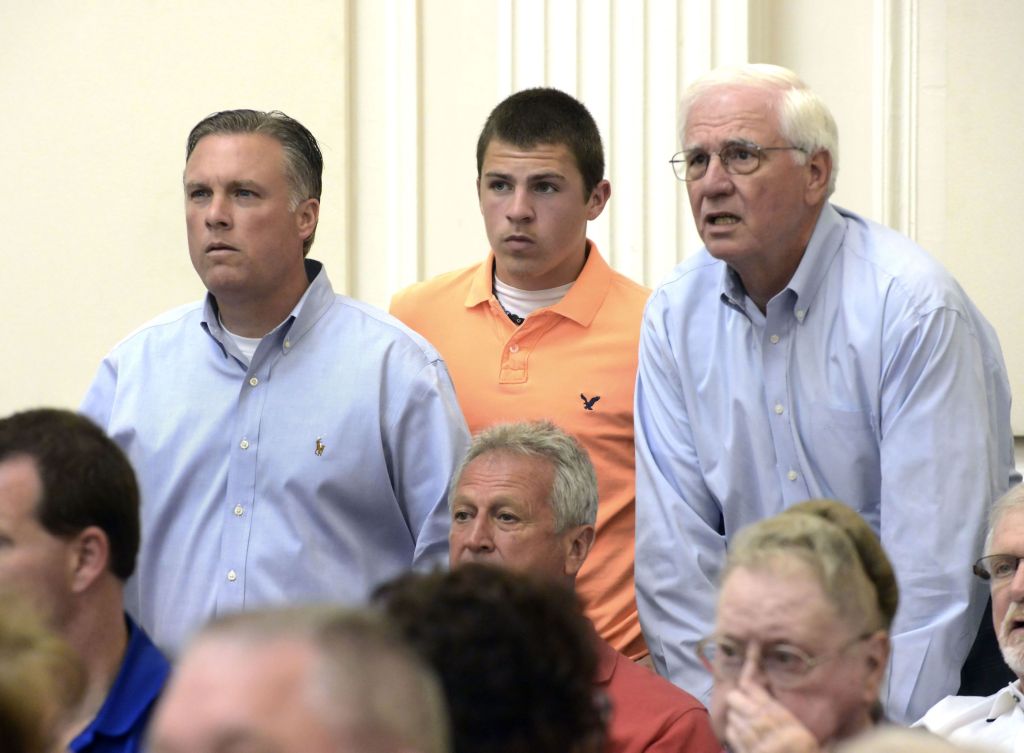 Rowan County residents will elect three new county commissioners in November after board Chairman Jim Sides came up short in the Republican primary on Tuesday.
Sides finished fifth out of eight candidates running for three spots on the fall GOP ticket.
Jim Greene, Greg Edds and Judy Klusman won the nomination.
Three seats on the Board of Commissioners are up for election this year, and incumbents Jon Barber and Chad Mitchell are not seeking re-election.
In front of a standing room-only crowd Tuesday in the Rowan County commissioners’ meeting room, dozens watched the big screen as Greene, Edds and Klusman solidified their position on the ballot, getting enough votes to avoid a second primary.
Out of 91,526 voters in Rowan County, 16,353 — or 17.87 percent — turned out to vote in the primary.
According to the Rowan County Board of Elections, 12,538 Republicans voted in the primary compared to 3,766 Democrats.
Greene received 6,728 votes, or 20.31 percent of the total votes cast.
Edds received 5,306 votes, or 16.01 percent.
Klusman garnered 4,632 votes, which came to 13.98 percent of the total.
The trio beat out Johnny Love, Sides, Brandon Cupp, Joe Coladarci and David Roueche, in that order.
Love received 4,204 votes while Sides received 3,898 votes and Cupp got 3,376.
Coladarci got 2,702 votes, and 2,287 people voted for Roueche.
Greene said the election results show county residents have decided they want “a new direction.”
“Our job programs and the improvement of life of the citizens of Rowan County is what we are interested in doing,” Greene said. “By building the tax base through jobs, we hope to keep taxes low.”
The citizens also want to see cooperation among the county’s municipalities, Greene said.
The top three vote-getters are people who can “bring folks together,” Greene said.
“I want to thank all of the people who supported me,” Greene said. “We saw a lot of great people — all of them were interested in making some positive changes.”
Edds said the campaign, which entailed plenty of knocking on doors and putting out signs, has been a long and arduous process.
There are two ways to run a political campaign, Edds said.
“One way is grassroots, knocking on doors, hard work, sweat and effort. That is what we did,” Edds said. “The other way, which has been effective for some, is a high-dollar, mass marketing type of campaign. We just couldn’t do that.”
Edds said he has had the benefit of sitting down with hundreds of people, and the same themes emerged.
“Those themes are schools, jobs and the economy,” Edds said. “They want people who can make a plan, and they want people who can lead. That is what I intend to do.”
Edds’ next steps are to reload and continue to run a clean campaign as the general election approaches.
“I’ll leave the ugliness and personal agendas to other folks,” Edds said. “I just want to focus on a few things – schools, jobs and growing our economy.”
For Klusman, Tuesday’s results demonstrate democracy works if people participate. Now that people have spoken, Klusman said “a lot of things are going to get done.”
“We are still ‘we the people,’” Klusman said. “We are at the cusp, with all the new leaders who are here, to be able to join together and be able to push this stuff all the way back.”
A candidate cannot run a campaign alone, Klusman said.
“It is a full-time job and campaign to win a position, especially when you didn’t grow up here,” Klusman said. “I love the people of this area. I plan on staying a long time, and I hope I can be in public service during my days here.”
Love came in after Klusman with 428 fewer votes. Rowan County is ready to move forward, he said.
“Voters expressed that at the polls. I was very happy and excited with the support that I received,” Love said. “I’m going to go home, look at what I did, look at what I didn’t do, talk to my wife and start working on the next one.”
He plans to run for the commission again, he said.
Sides, chairman of the county commission, said he has lost as many elections as he has won.
“You do the best you can. You don’t win them all,” Sides said. “I think the taxpayers of this county didn’t get out and vote. I think a certain crowd did get out and vote, and they changed the face of politics in Rowan County.”
Sides said he hopes “everybody gets what they wanted.”
While Sides said it is too early to say whether he will run again, the prospect is “real doubtful.”
“I’m going to spend the next couple years concentrating on a few other things. I’ll be 66 this year,” Sides said. “I’m not sure I want to go back into it two years from now, but who knows? You never know.”
Sides said he has another six months of being a commissioner, and he plans on doing the same job in that time period he has for the past three-and-a-half years.
Cupp said he was surprised with the results.
“I still feel like I gave 100 percent,” Cupp said.
Cupp said he is planning on running again.
“I’ve been hustling. There has been a lot of anxiety and ups and downs,” Cupp said. “Everybody should put it on their bucket list and do it at least once. I enjoyed it. I’ll be back.”
Greene, Edds and Klusman will be on the ballot this fall with two Democrat candidates — Leda Belk and Rick Locklear. Unaffiliated candidates Raymond Coltrain and Gene Miller have collected enough signatures to also be on the ballot, and Chris Cohen is working on gathering signatures too.