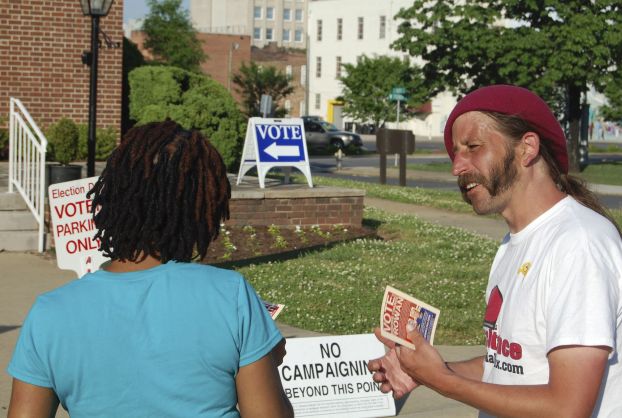 Dodi Le Fevre-King has been following the much-talked about county purchase of the former Salisbury Mall, saying she thought the Rowan County Commissioners should’ve thought more about the public’s opinion. The mall issue was one of the reasons that led her to the polls today.
Fevre-King didn’t mention who she voted for, but said the purchase was a slap in the face to Rowan County citizens. She also credited La Resistance with rousing voters to think twice about their vote.
She said the group “did a lot in seven weeks.” She cast her vote at the Park Avenue precinct.
The group, whose members and supporters have sported red berets, have opposed the county’s purchase of the mall, now West End Plaza, and encouraged registered Democrats to switch their registration to unaffiliated so they could vote in today’s primary.
Queen Williams said the race she’s been following closely was that of sheriff. Williams said she’s known Kevin Auten and his father for a number of years and wanted to show her support with her vote. She cast her ballot from the Granite Quarry precinct.
Timothy Morgan said he’s followed the judicial race closely, noting that he wanted to see if the candidates’ platforms aligned with their track record.
Morgan said he read the judicial evaluation made available by the N.C. Bar Association that ranks the candidates by their experience. The evaluation survey was completed by court personnel and fellow attorneys. He found the evaluation very “enlightening” and said it confirmed what he already believed.
Mike-o Martelli, an avowed member of the group La Resistance that’s been advocacting change on the board of county commissioners, spoke with voters Tuesday outside the Rowan County Public Library.
Martelli also voted on election day.
“I came here mainly for the county commission race,” Martelli said. “I was looking to vote for the three candidates who would most reinstate cooperation in local government — both between county departments and also between the county government and the various municipal governments within the county.”
Martelli also said he was looking for county commissioner candidates who will bring economic development to the county.
“It’s not just any job. It is about the three I felt would be the most dedicated to bringing quality jobs to the citizens of Rowan,” Martelli said.
If the county had a zero rate of unemployment, and 99 percent of jobs paid minimum wage, Martelli said the situation would be worse than what it is now.
“We need commissioners who are really going to invest in the future of our county, particularly through education and safer streets for bicyclists and pedestrians throughout the county,” Martelli said. “I really want them to help make this county a place I feel proud to call my home.”
Nancy Blakeley also walked into the Rowan County Public Library headquarters to cast her ballot.
For Blakeley, this election is “extremely important.”
“I don’t feel like you have the right to complain, unless you do what you can to help any positive changes,” Blakeley said.
The daughter of a downtown business owner, Blakeley said this race is important.
“I’m very into the (N.C. House) race this time as well,” Blakeley said. “Also, I don’t really like all the negative campaigning against Kay Hagan. That affects it as well.”
The number of Rowan County residents hitting the polls has been steady in areas, said Board of Elections Director Nancy Evans. The polls opened today 6:30 a.m. with some precincts that have historically shown a good turnout doing the same today.
“I think it’s steady at times. There’s some that are steady and some that have a lull,” Evans said.
She said the Board of Elections office phones have been ringing all day fielding questions from Rowan County voters.
The majority of the calls have been from people who are not sure where to vote, while others aren’t sure they are registered. The office is also getting calls from poll workers addressing concerns that arise.
Evans said historically the City Park precinct has had a high turnout. She added that the Salisbury Civic Center and Park Avenue precincts also do pretty well. In the county, Evans regarded Bostian Heights, Landis and China Grove as places that have a good number of voters.
The polls close at 7:30 p.m., however, Evans said, if voters are in line at that time, they’ll be allowed to vote.
Check back periodically for election day updates and follow the hashtag #RowanVote on Twitter throughout the day for updates of Salisbury Post election coverage.