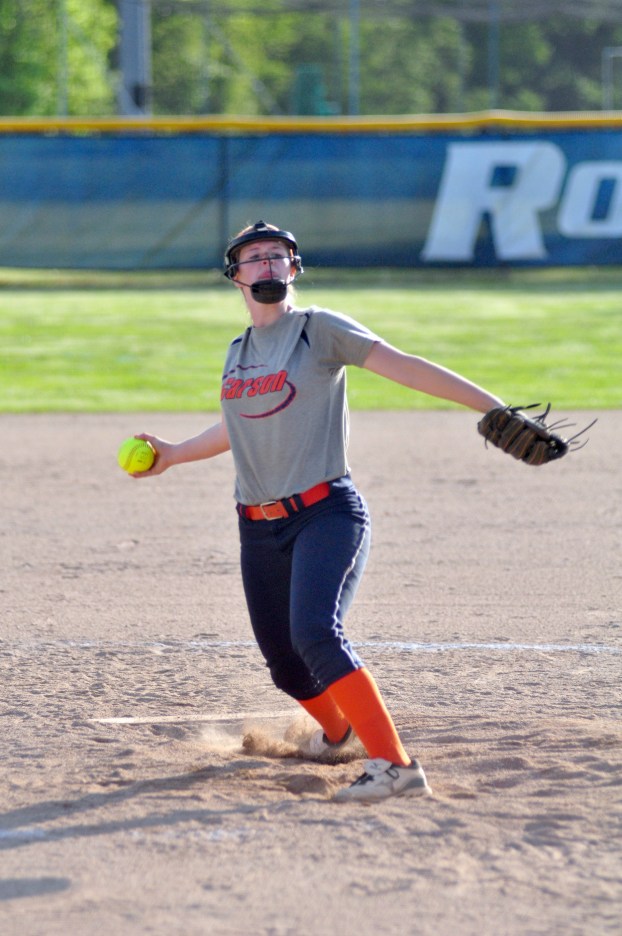 MOUNT ULLA — Carson’s lead was down to one run in the seventh, Cox Mill had the tying run at second and the go-ahead girl at first base, and Carson coach Dee Miller ambled slowly to the circle to converse with freshman pitcher Krista Peninger.
Peninger said what Miller wanted to hear, something along the lines of “I’m not tired, I’m OK, and I’m going to get these next two.”
She did get the next two, with the second out coming on a sharp grounder to second baseman Morgan Peninger, Krista’s big sister. Then the last out came on a popup that shortstop Michalea White squeezed to send the Cougars into the SPC tournament semifinals.
“That was one of the best games she’s pitched,” White said. “She finished well.”
Carson was the SPC favorite until star pitcher Lacee Hunsucker went down with a knee injury early in the season. That put the Cougars in a tight spot. Krista Peninger isn’t a fireballer, but she’s performed admirably. She’s kept the Cougars competitive.
“We had to throw her right into the woods,” Carson coach Dee Miller said. “She’s done well. She’s a freshman and she’s given us an opportunity to win games, and that’s all you can ask.”
As the SPC’s fifth seed, Carson (11-8) is in position to make the 3A state playoffs. The only way the Cougars won’t make it is if No. 7 seed East Rowan wins the tournament. Carson can move up from 5 to 2 if it wins the tournament. Carson will play top-seeded West Rowan in a semifinal Wednesday at Hickory Ridge.
Kayce Kennedy singled home a run in the first for Carson. Fourth-seeded Cox Mill (10-8) got that run right back on Ericka David’s RBI single.
It stayed 1-1 until the fourth when Kennedy’s double triggered a three-run inning.
“Our hitters did a good job of being more selective,” Miller said.
Rachel Freeze singled home the run that broke the 1-all tie, and White who had lined out to right field and shortstop on her first two at-bats, drilled a two-run single for a 4-1 lead. Freeze was safe at home on a close play.
“I just had to keep doing my job, and you know the ball is going to fall in sometime,” White said.
Chelsea DiGregoro’s run-scoring double cut Carson’s lead to 4-2, but it was 5-2 after Jana Bradshaw’s groundout plated Mariah Morgan in the Carson fifth.
Another DiGregorio double made it 5-3 in the sixth, and Krista Peninger knew the top of the seventh was going to be a struggle with the talented top of the order coming up for the Chargers.
“Every time we play them they rally late,” Peninger said.
A popup started the Cox Mill seventh, but then it was single-single-single, Carson’s lead was 5-4, and Miller was headed out to the circle.
“She just told me to settle down,” Peninger said. “She gave me a chance to catch my breath, and I knew I had to get ahead of their hitters.”
Peninger did, and the game ended the way Carson needed it to end — with a groundout, a pop fly and a modest celebration.
“Krista made good pitches, and we made the plays for her,” Miller said.