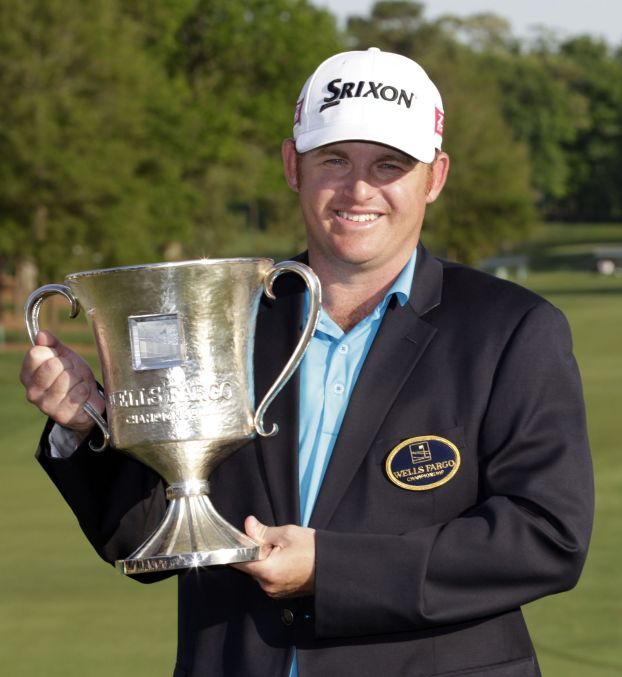 CHARLOTTE, N.C. (AP) — J.B. Holmes was a 3-foot putt away from winning the Wells Fargo Championship when he backed away to size up the situation.
This wasn’t about pressure. He was just happy to be there.
Nearly three years removed from brain surgery, Holmes was in a far better place Sunday at Quail Hollow. His 3-foot bogey putt gave him a 1-under 71 and a one-shot victory over Jim Furyk, capping a remarkable comeback from a health issue that wouldn’t be classified as the garden variety in golf.
Not many other guys keep a piece of their skull in a container in their closet.
“Just enjoying the moment,” Holmes said. “You don’t get that very often, so getting up and thanking God for letting me have the opportunity to do it. Whether I made it or not, just enjoy being there.”
He made it more stressful than he needed, with two bogeys on the last three holes and an 8-foot par putt on the other. Jason Bohn had the best chance to catch Holmes, one shot behind until pulling a 4-iron into the water on the par-3 17th and making double bogey. Phil Mickelson never had a chance, missing four putts from the 4-foot range and closing with a 76 to finish out of the top 10.
It was the third PGA Tour win for Holmes, and by far the sweetest.
Three years ago, he began to feel dizzy, and it wasn’t much longer when he was diagnosed with structural defects in the cerebellum known as Chiara malformations. He had brain surgery — twice. The first time was to remove a piece of his skull. The second time was from an allergic reaction to the adhesive that was holding the titanium plate to the base of the skull, causing severe headaches.
If that wasn’t enough, he injured his left elbow from hitting too many golf balls in a rush to return. Holmes spent a year getting more cortisone shots that he cared to remember, and when he broke his ankle while roller blading for exercise last year, he used that time to have elbow surgery.
“It’s been a long journey for me,” Holmes said. “I’ve had some ups and downs. It’s a great feeling to be out there and to get one done.”
Holmes made enough key putts to allow for some mistakes at the end. He ran off three birdies in a four-hole stretch around the turn, including a 30-footer on No. 11 that opened up a two-shot lead. He gouged a fairway metal out of the rough on the par-5 15th to set up a 6-foot birdie putt that stretched his lead to three shots.
Perhaps the biggest putt of all was an 8-foot par save on the 17th hole. That kept his lead at two shots, and he needed it. Instead of playing an iron off the tee, he drove into the right rough, came up well short of the green and chipped weakly to 45 feet.
Furyk was watching on TV in the locker room when Holmes knocked in the bogey putt to finish at 14-under 274.
Martin Flores, in his first time playing in the last group, fell too far back with a three-putt bogey on the 13th. He made bogey on the 18th for a 72 and was third, the best finish of his PGA Tour career. Bohn also bogeyed the 18th for a 70 to finish fourth.
Bohn received a bad time on the 16th hole — one more would have been a one-shot penalty — and said he let it get to him.
“I didn’t feel comfortable with the wind starting to gust up a little bit, and I went ahead and hit it anyhow in a situation that I probably would have backed off in,” Bohn said. “So I’m more disappointing in myself and the way that I handled that than the golf shots that I hit.”
Still, the biggest disappointment might have been Mickelson.
He was in great shape going into the final round, two shots out of the lead, and the two players ahead of him stalled at the start. Instead, Mickelson matched his highest final round on the PGA Tour since The Barclays in 2012. And it was an old nemesis — short putting — that did him in. Mickelson three-putted from 15 feet on No. 8. He missed a 3-foot par putt on the 11th, a 4-foot birdie putt on the 14th and four-putted from 30 feet on the 16th.
“I had two great rounds and I had two pathetic rounds this week,” Mickelson said. “The greens putted perfectly, even though I didn’t.”
The challenge came three others, with a series of eagles that injected some drama into Quail Hollow, if only briefly.
Furyk chipped in for eagle from off the 15th green and then closed with three straight pars for a 65 to sit in the clubhouse at 13-under 275. Bohn holed out a sand wedge from 95 yards on the par-5 10th hole that disappeared into the cup on the third bounce. He also chipped in for birdie on No. 12.
Flores chipped in for eagle from short of the 10th green that allowed him to tie for the lead, but only until Holmes made a short birdie putt of his own on No. 10. Holmes ran in the long birdie putt on the next hole for a two-shot lead, and he stayed in control the rest of the way.
Holmes still has that container with a piece of his skull somewhere in his closet. He doesn’t use it as inspiration. He’s not even sure where it is. So when asked if he would put the trophy from Wells Fargo next to it, Holmes chuckled.
“I’ll put the skull in the trophy,” he said.