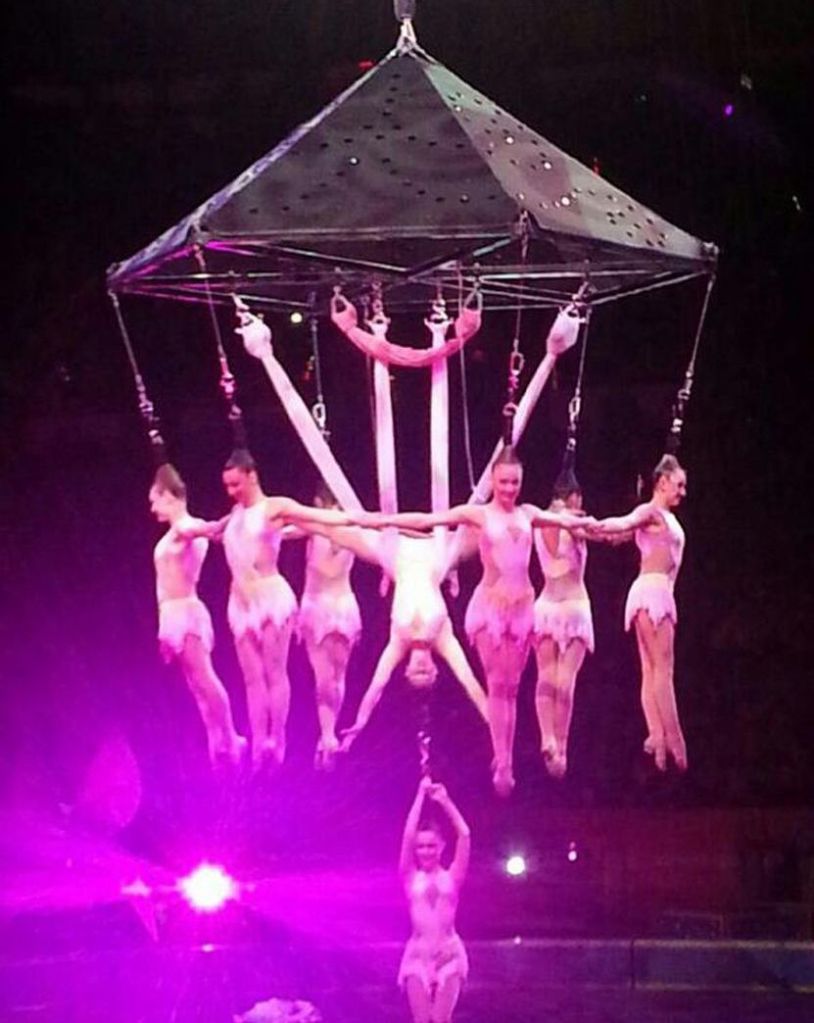 PROVIDENCE, R.I. (AP) — A support frame collapsed during an aerial hair-hanging stunt at a circus performance Sunday, sending eight acrobats plummeting to the ground. Nine performers were seriously injured in the fall, including a dancer below, while an unknown number of others suffered less serious injuries.
The accident was reported about 45 minutes into the Ringling Bros. and Barnum and Bailey Circus’ 11 a.m. Legends show at the Dunkin’ Donuts Center in Providence.
Stephen Payne, a spokesman for Feld Entertainment, the parent company of Ringling Bros., said the accident happened during an act in which eight performers hang “like a human chandelier” using their hair.
He said the metal-frame apparatus from which the performers were hanging came free from the metal truss it was connected to. The eight women fell 25 to 40 feet, landing on a dancer below.
All the performers have been doing “some variation of this act for some time,” Payne said, though he didn’t know how long. The current incarnation of the act began in January with the launch of the show, he said.
Providence Public Safety Commissioner Steven Pare said officials and inspectors haven’t yet determined what caused the accident. He said none of the injuries appears to be life-threatening.
Roman Garcia, general manager of the Legends show, asked people to pray for the performers.
“Everybody’s doing fine, everybody’s at the hospital, everybody’s conscious, everybody’s doing pretty well,” he said at the Dunkin’ Donuts Center less than two hours after the accident.
Rhode Island Hospital in Providence admitted 11 patients with varying injuries, including one in critical condition, spokeswoman Jill Reuter said.
The hair-hanging stunt is described on the circus’ website as a “larger-than-life act” featuring eight female performers.
“These ‘hairialists’ perform a combination of choreography and cut-ups including spinning, hanging from hoops, and rolling down wrapped silks, all while being suspended 35 feet in the air by their hair alone,” the website says. “In this hair-raising act, audiences will even see the weight of three girls held aloft by the locks of only one of these tangled beauties.”

Video taken by audience members shows a curtain dropping to reveal several performers hanging from an apparatus suspended from above. Seconds later, as they begin to perform, the women fall, and the metal apparatus lands on them.
“It just went crashing down,” said audience member Sydney Bragg, 14, of North Kingstown. “Everyone was freaking out. We heard this huge clatter and then we just heard the girls scream.”
She said spotlights were on the performers at the time, but all the lights went out after the fall.
Rosa Viveiros of Seekonk, Massachusetts, said she saw that the acrobats had fallen on top of at least one other performer below, a man who stood up with his face bloodied. The acrobats remained still and did not get up, she said.
“We thought it was part of the circus,” said her husband, Joe.
The couple attended the circus with their 6-year-old grandson and 9-year-old niece.
“Everyone was in shock,” Rosa Viveiros said. “It was pretty overwhelming to see that.”
The circus began performances in Providence on Friday. The Dunkin’ Donuts Center canceled two shows scheduled for later Sunday.
A Ringling Bros. aerial performer was killed in 2004 in St. Paul, Minnesota, when she was twirling 30 feet in the air on long chiffon scarves and the material gave way.
———
Associated Press writers Josh Cornfield in Philadelphia and Jessica Gresko in Washington contributed to this report.