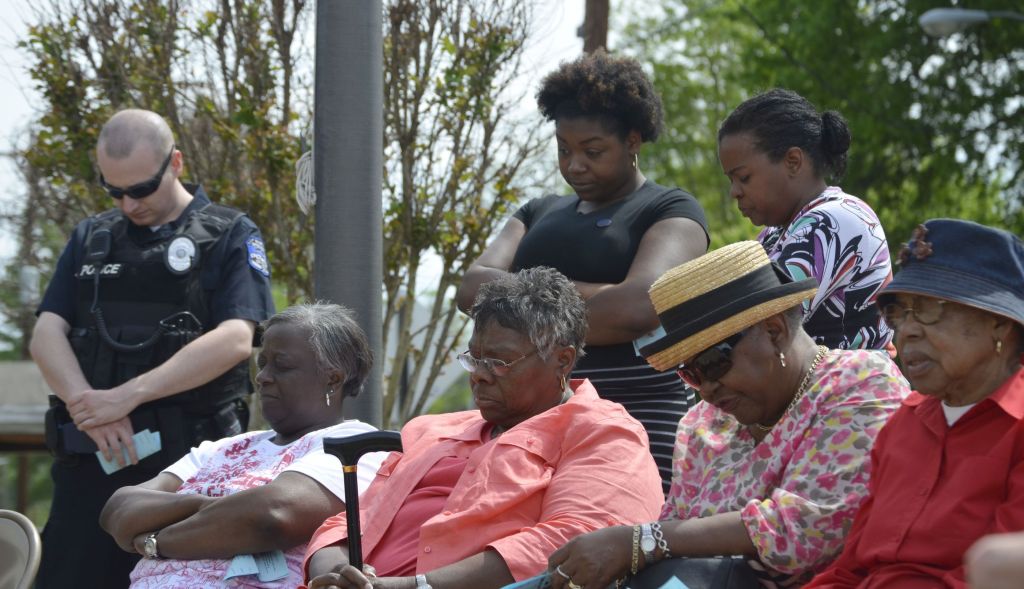 The Rev. Oscar Ramirez has traveled the world through his 27 years in the military. No matter where he landed, prayer was always at the center of his life.
Ramirez, who is pastor of Oakland Heights Baptist Church, was one of about 20 pastors who participated along with members of their congregations in the National Day of Prayer service at the Bell Tower.
Other local groups and municipalities held services Thursday to observe the National Day of Prayer event.
East Spencer held a gathering where several ministers and leaders in the community prayed on the front steps of town hall.
“National Day of Prayer is an opportunity to remember our foundation. As we lose sight of those founding principles we stand in danger of losing our freedoms,” Ramirez said.
The service is also an opportunity to “humble ourselves before God,” he said.
He led those gathered in the Pledge of Allegiance and took a moment to honor veterans who were in attendance.
Those gathered sang under the shade of the trees with help from several ministers from local Baptist churches who led the prayers.
The Rev. Justin Lucas, who is youth pastor at Trading Ford Baptist Church, has participated in the event for the last four years.
“We need to call on God. We are so far away from where God has intended us to be. We have forfeited some of the blessings he has for us,” Lucas said.
Many of those who led prayers asked God to bless and provide wisdom to local, state and national leaders.
“The more we pray, the more we rely on God,” said the Rev. David Jones of Wyatts Grove.
Jones read from the Continental Congress 1777 proclamation. The National Day of Prayer event was established in 1952 and signed into law by President Harry S. Truman.
The event was sponsored by the Rowan Southern Baptist Association, an event they’ve hosted for 15 years. Perez is the interim director of missions for the Rowan Southern Baptist Association. He led the Thursday ceremony at the Bell Tower. Perez is also pastor of Fe En Jesus, a Spanish-speaking Baptist church in Faith that was established in September 2012.
“God has shown that in unity there is strength. The United States is strong because there is unity,” Perez said.
He said prayer will change many things.
Three years ago, the town of East Spencer held its first National Day of Prayer event as a way to collectively gather to speak of issues the town was facing.
On Thursday the message was “One Voice, United in Prayer.”
Area leaders and ministers let their prayers be heard by passersby and those walking and living in the area.
The Rev. Michael Mitchell asked those gathered to constantly seek God every morning in prayer. Mitchell is a minister with Southern City AME Zion Church in East Spencer.
“We are not immune to trials and tribulations,” he said getting amens from the audience.
Mitchell said God should constantly be on people’s mind.
There will be people who anger you or “get on your nerves,” said Earlene Turner.
“God in his infinite wisdom is simply using those people as instruments for fulfilling his purpose in our lives,” she said.
Turner attends Whosoever Will Let Them Come Inc., a ministry located in Spencer.
She said God holds all power in his hands and people have to trust in him.
“We thank you for the people gathered this morning because if ever there was a time we need to pray, that times is now. Help us understand you still have power in your hands,” Turner prayed.
She asked for blessings on the town, Salisbury and the nation.
Mayor Barbara Mallett said they could easily gather inside for the event, but holding a National Day of Prayer service outside hopefully encourages passersby to stop and see what united in prayer.
Rosa Burris sang Amazing Grace as those in attendance swayed to her melodic sounds.
She and husband, Johnnie, moved from Charlotte, Burris said.
“Prayer is what changes things,” she said.
Rosa said she suffered a brain aneurysm, “but I’m still here,” she declared.
After surviving what could’ve been fatal, she said, God told her to tell her story and let people know he loves them.
She and her husband attend Love Christian Center.
Gwendolyn McIlwain said she attended to support her sister, Earlene Turner, but reminds others to “keep prayer in everything.”
Guest speaker Carolyn Rogers spoke to the group about Rowan County Relay for Life.
She urged people to take care of themselves. She asked those gathered to support Relay for Life with their prayers, volunteer efforts or through donations.