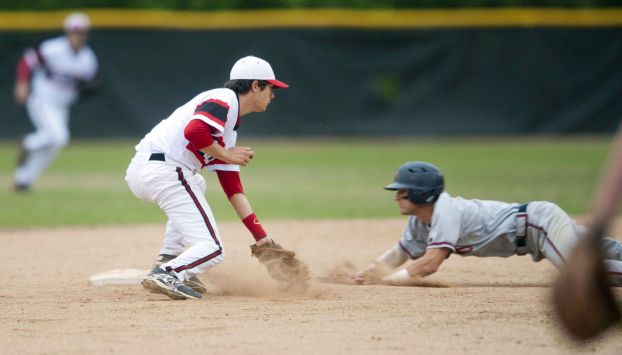 LANDIS — No one could believe what they just saw in the bottom of the seventh, but the bottom line was that South Rowan beat East Rowan 7-6 on Tuesday in SPC baseball.
By rallying for seven runs in the bottom of the seventh to stun frontrunner East, South stayed alive for a share of the SPC title — and also kept Carson alive.
“We got down early and stayed down a long time,” South catcher Matt Honeycutt said. “But we finally found some life in the seventh.”
Honeycutt, who had two of the three hits South managed, could say that again — and again.
East, which had a six-game winning streak snapped in amazing fashion, is 16-7 and 12-3 in the league. South is 19-4 and 11-4. Carson is also 11-4 in the SPC. East closes the regular season by hosting South on Friday in what promises to be a spectacle, while Carson entertains Cox Mill.
If fans saw giraffes chasing elephants down Highway 29 after the game or dogs chatting amiably with cats, it wouldn’t have been any weirder than what they witnessed at the ballpark.
South trailed 2-0 after six innings in a game dominated to that point by unbeaten East lefty Connor Johnson.
“We were battling defensively to stay in the game,” South coach Thad Chrismon said. “But offensively, it was hard. Johnson pounded the strike zone. He was just so tough.”
But the strike zone tightened for both teams and all four pitchers who took the mound in both halves of the seventh. That’s when 11 of the game’s 13 runs and six of the game’s nine walks occurred.
RBIs by Joseph Peeler and Scott Sapp against South’s crafty southpaw Blake Johnson had East ahead 2-0 heading to the seventh.
“We left too many on,” East coach Brian Hightower said. “We should’ve led by a lot more than we did, but we just didn’t get it done.”
It still looked like a done deal, especially after East tacked on four more runs in the top of the seventh. Ike Freeman and Luke Setzer walked with the bases loaded. Then Sapp drove in two more runs with a clutch single.
But then came the bottom of the seventh.
Catawba-bound Connor Johnson has been the county’s dominant pitcher all season. He’s 8-0 and 9-0 seemed a lock when he started the seventh by fanning South’s No. 3 hitter Chase Labbe for his 11th strikeout of the night and 93rd of 2014. East was two outs away from clinching an outright league title and led by a touchdown.
But Honeycutt whacked a solid single, Austin “Bo” Corriher was hit by a pitch, Eric Stowe walked to fill the bases, and pinch-hitter Ryan Ashworth walked to make it 6-1.
“I don’t think anyone really said that much,” South second baseman Chandler Corriher said. “But all the coaches were still up. They kept reminding us to fight until there weren’t any outs left.”
Hightower had a decision to make. Johnson is East’s stud, but the shrinking strike zone was on his mind.
“He’d thrown close to 90 pitches, and we had a fresh guy ready to go,” Hightower said. “Joseph Peeler has been throwing well and finishing games — that’s what he does.”
Peeler took the ball. Raiders crowded the plate, which as Hightower pointed out, was good baseball. Hunter Travis was hit by a pitch, and it was 6-2. Eric Goldston, who enjoys wearing pitches, got hit as well. Now it was 6-3, and with leadoff man Tyler Fuller striding confidently to the plate, South fans began to sense they could pull off a miracle.
Fuller walked, and it was 6-4 and getting loud. Chandler Corriher walked, and it was 6-5 and getting louder. South had batted around.
“After what happened in the top of the seventh, we went to the plate knowing we needed to see more pitches,” Honeycutt said. “And guys just battled on every at-bat.”
Labbe was next. Seven straight batters had walked or been struck by pitches, but Labbe put the ball in play. He lashed a hard bouncer up the middle, and East came very close to ending the game with a spectacular twin killing. Shortstop Freeman got to the ball and fed second baseman Michael Caldwell for the forceout at second. Chandler Corriher arrived at second just as Caldwell got the ball, and Corriher’s hustle played a role in Caldwell’s throw to first sailing high as he attempted to complete a game-ending DP.
Goldston scored the tying run from third, Fuller raced home with the game-decider from second, and the Raiders walked off as improbable winners.
“It’s just a testament to our guys that they never quit fighting,” Chrismon said. “It’ll be tough again Friday at East, and we know that. We’ll show up and play.”