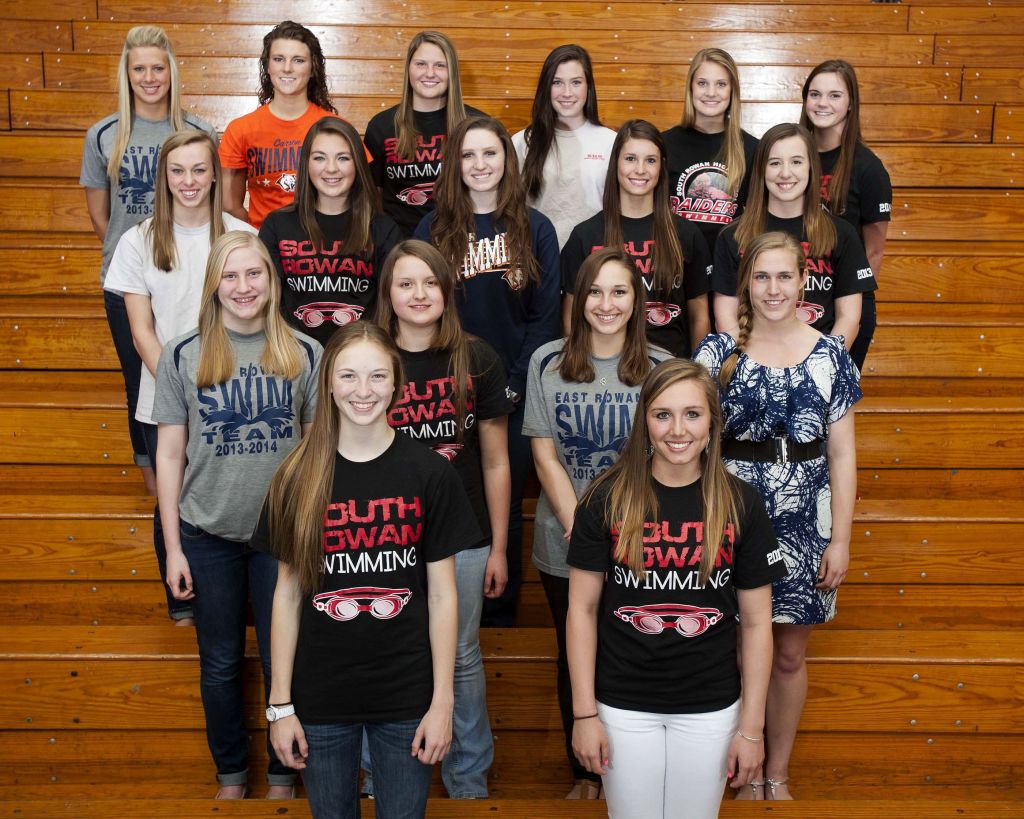 According to South Rowan coach Jacob Morton, this year’s edition of the Raider women’s swim team was the best ever, a fact hidden at times by a very strong South Piedmont Conference and the conference’s eventual champion, Cox Mill. But there was nothing hidden about South’s depth and talent at this year’s Rowan County Championships, where they ran away with the team title: 85 points ahead of runner-up Salisbury.
So it was appropriate that when it came time to name the Rowan County Swimmer of the Year, a pair of Raiders shared the honor. For senior Nicole Mauldin, it was a return to the top – an exclamation point on an extraordinary career. For junior Leslie Franks, it was a statement that she had arrived.
Mauldin’s season was a roller coaster. Coming off a brilliant junior campaign, expectations were high. But a nagging shoulder injury during the summer and a concussion during volleyball kept Mauldin out of the water for months. Even after being cleared to compete, Mauldin sat out most of December.
“It was really challenging mentally,” Mauldin said. “I wanted to be competing with my teammates. I wanted to be improving. I knew we had a shot to do something great this year and it was hard not being able to help make that happen for so long.”
But when she returned to the water, she did so with a vengeance. Her lack of training contained her to the sprint events, but the mental toughness gained from fighting through injury showed. She dominated. Coming alive just in time for the conference championships, her most impressive performance at that meet was a team effort: as the anchor leg of a 200 medley relay that shattered the school record by over 6 seconds. The following Tuesday, in her last county meet, Mauldin returned to where she belonged: the top. Running away with the county titles in the 50 freestyle and 100 freestyle, she also led off the winning 200 free and 400 free relays.
For Franks, garnering the county’s top award was the natural next step in a swimming career that seems bound for greatness. Bursting onto the scene as a freshman to take county and NPC titles in the 50 free and 100 free, Franks wowed opponents.
“She’d never done any competitive swimming,” said Morton. “She just hopped in the water and from day one was one of the best swimmers around. She’s a freak of nature.”
With all that talent, it would have been easy for Franks to coast along for four years of good swimming. But good wasn’t enough for the junior phenom. She wanted great. After a strong sophomore year, Franks got serious, dedicating herself to a challenging regimen of offseason workouts, including at least two hours in the pool and an hour of dry land conditioning every day.
The hard work paid off. After two years playing second fiddle to Mauldin, Franks shouldered an equal load this season. She became the first female Raider to qualify for regionals in every event, breaking school records in the 200 free, 200 IM, 50 free, 500 free and 100 breaststroke in the process. She was the only Rowan county swimmer to win an event at the SPC championships – the 100 breaststroke. And at the regional championships in Greensboro, she won an electric 50 freestyle over Northern Guilford’s Isabella Forst.
Together, Franks and Mauldin let South not only to a county title, but to an unprecedented 2nd place finish at the regional meet, the best a Rowan school has done since Salisbury’s boys were winning state titles in the 1990s.
“I’m happy with…our accomplishments as a team,” Franks said. “I can’t wait to see what next season holds.”
•
Seven other Raiders joined Mauldin and Franks on the All-County team. Taylor Kluttz, Faith Casswell, Casey Pruitt and Kylie Labbe all medaled in their individual events. Samantha Kennerly, Sabrina Broadway and Madilyn Jones took part in winning relays. South Rowan accounted for 9 of the 18 All-County honorees.
•
Salisbury and East Rowan tied for the second highest number of All-County honorees. 2A state champion and Queens University signee McKenzie Stevens headlined the Salisbury contingent, which also included sophomore Amelia Steinman and freshman Sharmi Amin.
•
Senior Hailey Bartleson made her 4th All-County squad, this time in the 500 freestyle. The East Rowan senior was joined by sophomore speedster Brooke Waller (100 breaststroke) and fellow senior Jessica Yelland, who also made the team in the 500 free.
•
Carson placed a pair of swimmers on the team: senior Jana Bradshaw qualified for the second straight year in the 100 backstroke while sophomore Ashlee Wagoner made her debut by virtue of bronze medal performance in the 100 butterfly.
•
West Rowan sophomore Mikayla Graham made All-County in the 50 freestyle.