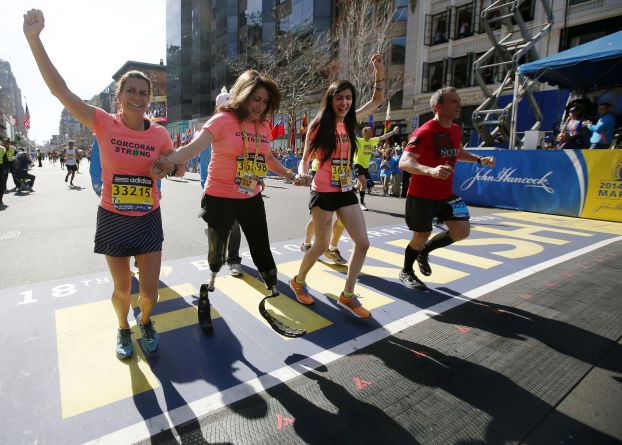 BOSTON (AP) — Some ran to honor the dead and wounded. Others were out to prove something to the world about their sport, the city or their country. And some wanted to prove something to themselves.
With the names of the victims scrawled on their bodies or their race bibs, more than 32,000 people ran in the Boston Marathon on Monday in a powerful show of defiance a year after the deadly bombing.
“We’re marathon runners. We know how to endure,” said Dennis Murray, a 62-year-old health care administrator from Atlanta who finished just before the explosions last year and came back to run again. “When they try to take our freedom and our democracy, we come back stronger.”
The two pressure cooker bombs that went off near the end of the 26.2-mile course last year killed three people and wounded more than 260 in a spectacle of torn limbs, acrid smoke and broken glass. But the city vowed to return even stronger, and the victory by Meb Keflezighi — the first American in 31 years to win the men’s race — helped deliver on that promise.
On Twitter, President Barack Obama congratulated Keflezighi and Shalane Flanagan, the top American finisher among the women, “for making America proud!”
“All of today’s runners showed the world the meaning of (hash)BostonStrong,” Obama wrote.
The race was held under extraordinary security, including 100 new surveillance cameras, more than 90 bomb-sniffing dogs and officers posted on roofs.
As runners continued to drag themselves across the finish line in the late afternoon, more than six hours into the race, state emergency officials reported no security threats other than some unattended bags.
Kenya’s Rita Jeptoo won the women’s race in a course-record 2 hours, 18 minutes, 57 seconds, defending the title she won last year but could not celebrate because of the tragedy.
Keflezighi, who did not run last year because of an injury, won the main event this year in 2:08:37. A 38-year-old U.S. citizen who emigrated from Eritrea as a boy, Keflezighi wrote the names of the three dead on his bib along with that of the MIT police officer killed during the manhunt.
As he was presented with the trophy and golden laurel wreath, “The Star-Spangled Banner” echoed over Boylston Street, where the explosions rang out a year ago.
“I came as a refugee, and the United States gave me hope,” said Keflezighi, who was welcomed by fans chanting “U.S.A.!” “This is probably the most meaningful victory for an American, because of what happened last year.”
At 2:49 p.m., the time of the first explosion, the crowd at the finish line observed a moment of silence — then broke into some of the loudest cheers of the day, with whooping, clapping and the clanging of cowbells.
This year’s starting field of 32,408 included 600 people who were given special invitations for those who were “profoundly impacted” by the attacks, and almost 5,000 runners who were stopped on the course last year when the bombs went off.
“Today, when I got to that point, I said, ‘I have to do some unfinished business,”’ said runner Vicki Schmidt, 52, of Nashville. She added: “You can’t hold us back. You can’t get us down. Boston is magical. This is our place.”
Some of the victims themselves returned for a ceremonial crossing of the finish line.
“It was hard. It was really hard,” said Heather Abbott, who wore a “Boston Strong” sticker on the black prosthesis where her left leg used to be. “I was really nervous. I didn’t want to fall. … I’m just glad we made it.”
Tatyana McFadden, who was 6 and sickly when she was adopted out of a Russian orphanage by an American, won the women’s wheelchair race for the second straight year. Afterward, she spoke of Martin Richard, the 8-year-old boy who was the youngest of those killed in the explosions.
“I have a Russian heritage, but I am an American,” McFadden said. “For today, not only was I running for Martin and his family, but all those other people that were affected by last year.”
Dzhokhar Tsarnaev, 20, is awaiting trial in the attack and could get the death penalty. Prosecutors said he and his older brother — ethnic Chechens who came to the U.S. from Russia more than a decade ago — carried out the attack in retaliation for U.S. wars in Muslim lands.
Tamerlan Tsarnaev, 26, died in a shootout with police days after the bombings.
“It was a hard last year,” Lee Ann Yanni, whose left leg was badly hurt in the bombing, said moments after crossing the finish line. “And we’re just so much better and stronger.”