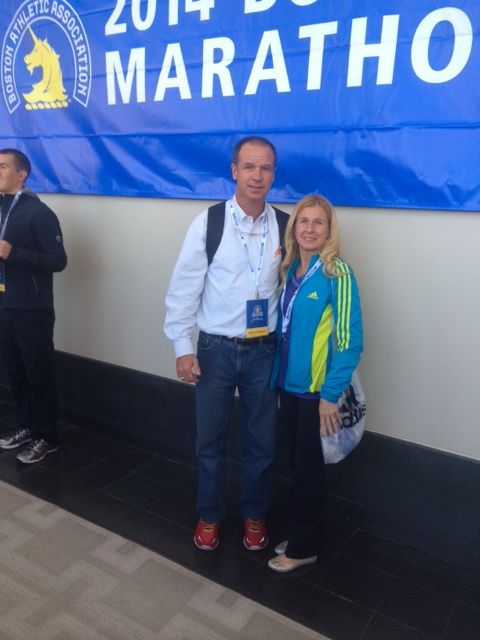 Dr. Kathi Russo will run her seventh consecutive Boston Marathon today, aiming for a finish somewhere around three hours and 35 minutes.
There will be reminders everywhere of what happened last year when two bombs exploded near the finish line in an act of terrorism, killing three and injuring hundreds of others. But Russo, a Salisbury pediatrician, is one of roughly 30,000 entrants today taking on the hills, curves and obstacles laced in the 26.2-mile course.
Consider it a testament to the spirit of runners, ones who know to keep pushing in the face of adversity.
“The running community is a strong social community,” Russo said Sunday afternoon. “I feel good to be here despite what happened last year. You don’t forget it, but I love to run and competition brings out the best in me.”
Russo, 54, finished about 30 minutes before the bombs went off at the finish line last year but was impacted nonetheless. The chaos that ensued remains vivid in her memory a year later.
“I was nearly back to the hotel,” Russo said. “I do recall hearing something but not knowing it was a bomb. When I heard what it was, it was shocking.”
Within minutes, the surrounding area became almost unrecognizable.
“My friend Dianne and I were all of a sudden in a war zone,” Russo said. “They evacuated our hotel. We couldn’t get to the airport. It was all very scary.”
There was some trepidation coming back to Boston this year, although running is contagious and Russo committed to return for one of New England’s long-running traditions.
“I came here feeling more cautious,” Russo said. “I was just going to go to the expo today, get my race packet and go back to the hotel, but once I got here I saw all the security here and all the people provided a certain energy and it was very reassuring.”
Russo was always athletic, having been a gymnast and a baton twirler when she was young. She grew up on Long Island, N.Y., and followed a medical career path, doing a residency at the University of Florida. The late Dr. Joe Corpening, who founded Salisbury Pediatric Associates, discovered Russo and invited her to work in Salisbury.
“I fell in love with the town and moved up here and have been here ever since,” Russo said.
She didn’t begin running seriously until 2007. Her first race was a 10K. She marveled at the runners who chose to do the half marathon race, thinking that was reserved for elite athletes.
Now she’s run in 14 marathons, including prestigious races in Berlin, Athens, New York and Chicago, in addition to Boston. Her personal best time is three hours, 27 minutes, but she’s not expecting to top that due to the difficulty of the Boston course. Russo ran in an ultra-marathon in Namibia, Africa, that went 150 miles over the course of several days.
Russo runs six days a week in the early morning with a training group in town. She says they run varying distances around town, sometimes at the track at Knox Middle School.
It’s been a tough winter weather-wise and that’s affected training. Two weeks ago, she ran 20 miles, and last weekend she did a nine-mile trek in preparation.
Martin Thorne is one of Russo’s training partners and is another Salisbury entrant running today. Carol Hauss is also running from Salisbury. Married couple Josh and Maleah Pinyon of Rockwell are there as well.
A memorial has been set up at the finish line this year and the Boston Red Sox paid homage to the victims with a pregame ceremony Sunday night. Red Sox slugger David Ortiz plans to visit the finish line today. Russo says others can draw from the strength the Boston community has shown in light of the attacks.
“People are reflective of what happened last year, but they’re not dwelling on it,” Russo said. “There’s not a feeling of gloom. It’s very uplifting here. There’s a lot of togetherness and hopefulness.”