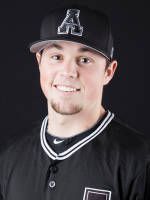 Area athletes update …
Appalachian State’s senior right fielder Preston Troutman (East Rowan), who has been a four-year starter for the Mountaineers, is in the homestretch of his college days.
Troutman has quietly put together an outstanding career. Counting Saturday’s game, a 10-4 win against Elon, Troutman has played in 188 games for ASU and has started 175. He’s scored 96 runs while driving in 81.
Troutman broke a long-standing school record on April 13 when he smacked the 13th triple of his career in a home game against The Citadel.
That broke a Mountaineer mark that had stood since the 1980 season.
Troutman had three triples as a freshman, three more as a sophomore, and two as a junior. He’s had five this season.
While Appalachian State has had an uncharacteristically down year (14-22), it should get a boost next season from the expected return of third baseman Noah Holmes (East), who’s missed the whole season following shoulder surgery.
Outfielder Brian Bauk (Salisbury) also figures to be much more of a factor for ASU next season. The freshman outfielder has started six games and is 5-for-30.
• Charlotte (11-24-1) also has struggled this season after some very successful years.
Corbin Shive (East) has been a two-way player after returning for his final year with the 49ers following Tommy John surgery.
Shive is 1-3 on the mound (he won on March 25 against Winthrop) with a 3.46 ERA and 22 strikeouts in 26 innings. His batting average is low, but he’s hit four of Charlotte’s seven homers.
• Brevard hurler Kevin Hamilton (NW Cabarrus) ranks fourth in the SAC in strikeouts with 64.
• Will Miller (NW Cabarrus) is leading the College of Albemarle in just about everything. Miller is batting .429 with team highs in steals (17), doubles (9), triples (4) and runs scored (27).
• When Francis Marion pounded St. Augustine’s 20-4. Taylor Garczynski (West Rowan) had two RBIs. • Jesse • Jesse Park (Carson) has pitched in 12 games this season for Pfeiffer.
Pfeiffer’s Dylan Goodman (South Rowan) has had a good freshman year. Goodman is batting .276 with 23 RBIs. He’s walked 19 times, so his on-base percentage is an excellent .382.
• Tyler Kowalczyk (South) has started 37 of 38 games and is batting .300 for Wheeling Jesuit. He leads the Cardinals in runs (22) and RBIs (16).
• First baseman Brett Huffman (West Rowan) has started every game for a strong UNC Pembroke team (30-14) and is batting .310 with five homers and 35 RBIs.
• Pitt Community College’s Tanner Bigham (NW Cabarrus) is batting .305 with a homer and 17 RBIs.
• Forrest Buchanan (Salisbury) has pitched in 16 games for Belmont Abbey and has a 2-3 record with a 3.63 ERA. He’s averaged better than a strikeout per inning and may get a chance to pitch at Newman Park Tuesday when the Crusaders visit on Catawba’s Senior Night.
• Nathan Fulbright (East) had a huge game for Guilford in an 8-7 loss to Randolph-Macon on Saturday. Fulbright had three hits and knocked in four runs.
Guilford’s Avery Rogers (East) was credited with his first win of the season recently when Guilford rallied to beat Lynchburg 8-7.
• Army’s Jon Crucitti (West) is 15-for-16 on steal attempts. Crucitti has been hit by pitches 15 times in 37 games, so he’s on base a lot.
• Freshman catcher Eric Tyler (South) has started 20 games for East Carolina. He’s been outstanding throwing with 23 assists and one error. He’s cut down 12 of 24 basestealers.
• UNC Wilmington’s Ryan Foster (Davie) is 1-1 with a 2.43 ERA in 10 appearances. He threw three scoreless innings last week against East Carolina.
• Jacob Barber (Davie) has four homers and 20 RBIs and helped Winston-Salem State win the CIAA championship.
Minor leaagues
Jerry Sands (Catawba) had three hits, including his fifth homer, on Sunday. Sands is red-hot and is batting .379.
Corey Seager (NW Cabarrus) hit his first homer of the season on Friday. Seager is batting .286 with eight RBIs
• Daniel Wagner (South) is 4-for-16 for Birmingham with two RBIs.
• Justin Seager (NW Cabarrus) had two hits on Saturday and is batting .281 for Clinton in Class A.

College golf
In the first round of the Southern Conference Championships in Pinehurst, UNC Greensboro’s Roy Dixon (Salisbury) shot 71 for a position near the top of the leaderboard. Dixon’s round included an eagle and three birdies.
• Elon’s Troy Beaver (Salisbury) shot a first-round 84.

College softball
Elon’s Chelsea White (East) earned her ninth win of the season with a complete game in a 5-3 Southern Conference victory against Appalachian State.
• Zebresha Blakeney (A.L. Brown) had one of North Carolina A&T’s three hits in a 1-0 loss to Bethune-Cookman.
• Pfeiffer’s Sydney Poole (East) pitched a complete game but lost 4-0 to Mount Olive.

College track
Western Carolina’s Alisha Bradshaw (Salisbury) was named Southern Conference Track and Field Athlete of the Week. Bradshaw ranks first in the league in the discus. She’s second in the hammer throw and fifth in the shot put.
• Tennessee’s Tavis Bailey (A.L. Brown) threw the shot put 61 feet, 8.25 inches in a meet in Californi over the weekend.