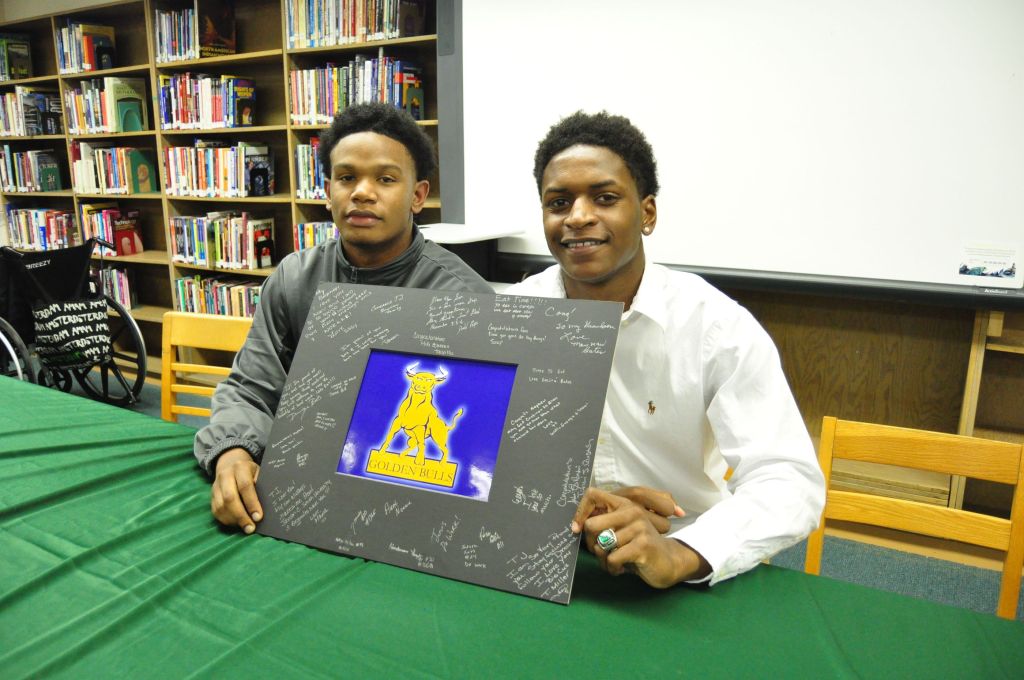 SPENCER — North Rowan basketball coach Andrew Mitchell knew T.J. Bates even before there was a T.J. Bates.
If that statement doesn’t make much sense, you’ll have to let Mitchell explain.
“Tim Bates was my college roommate at Catawba,” Mitchell said. “One day I see him kissing this girl on the square and when you see people kissing on the square in front of everybody, you know they’re going to get married. And they did. It wasn’t long before little T.J. was coming along.”
T.J. Bates — officially Timothy Bates II — is Mitchell’s godson and the son of North’s valuable assistant coach. He didn’t grow exceptionally tall at 5 feet, 10 inches, but he did grow up strong, smart and tough. He understands basketball and plays it with grit and passion.
When Bates signed with Johnson C. Smith’s program on Thursday, it marked the end of one long journey through an obstacle course and the start of a new one.
“A torn ACL is tough to come back from, and I’ve had two of ‘em,” Bates said. “I’ve had a lot of people tell me that if it had happened to them, they wouldn’t still be playing,”
When Bates arrived at North Rowan, he came with some hype. He played the second half of his freshman season with the varsity.
By his sophomore year in 2010-11, he was a key player on a deep team that also included his brother Javon Hargrave, Pierre Givens, Sam Starks, Malik Ford, Jordan Kimber and freshmen Michael Connor and Michael Bowman.
Those Cavaliers beat Winston-Salem Prep 92-85 in double overtime in the Western Regional final in what had to be one of the greatest games in 1A history. Bates was as good as anyone on the floor. He scored 22 to lead the Cavs and was voted regional MVP.
When North stormed back from a halftime deficit to beat Pender for the 1A championship the following week, Bates made the bucket that put North ahead to stay. A 1,000-point career looked like a sure thing for Bates and the sky appeared to be the limit.
But ACL Injury No. 2 wiped out Bates’ junior season before it even started.
Bates returned to the floor as a senior, at maybe 75 percent, and as a less explosive player. North had Oshon West, Ford, Connor, Bowman and Jalen Sanders to score, so Bates accepted the roles of leader, ballhandler and defensive stopper. He scored 6.9 points a game, but he was more critical to North’s success than that sounds. He made the all-county team.
North fell short of the regional without Bates in 2012. With him, the Cavaliers returned to Greensboro in 2013 for another epic struggle with Winston-Salem Prep. Bates scored 18, his biggest offensive game all season, but this time North lost to loaded Prep in two overtimes.
“T.J. went down with cramps against Prep,” Mitchell said. “I still believe that if T.J. had been healthy, we win.”
That was Bates’ last game in green and gold. Heartbreaking is an understatement,
“I didn’t like the way I went out,” Bates said.
The schools that came to watch Bates his senior year agreed he was fearless, but they weren’t moved to offer a scholarship.
Bates had zero grade issues — he’s a National Honor Society guy — but he played this past season, along with Ford, at Thomasville Preparatory Academy. The purpose was to get back to 100 percent health and to prove he could be a college point guard.
“I’m healthy now and I scored about 16 points a game this year,” Bates said.
Bates impressed a lot of people, including J.C. Smith. Another year removed from surgery, a lot of his athleticism returned, and if there’s a positive with his medical history, it’s that two ACL comebacks have made him as tough as anyone mentally.
“He’s definitely a warrior,” Mitchell said. “His senior year, he was just coming back from the injury, and when Johnson C. Smith watched him, they weren’t sure he could play for them. This year, they were calling me, wanting to know how they could get him.”
J.C. Smith did all the right things on Bates’ visit.
“I went to a game and I loved the atmosphere,” Bates said. “Their crowd reminded me of the Big Green Nation at North. The coach at Johnson C. Smith (Stephen Joyner) is a legend, and I’d like to help him win more championships.”
Joyner has coached the Golden Bulls to 483 wins over the last 27 seasons. They were 18-12 in 2013-14. The Bulls’ recruiting class will include North senior Bowman as well as Bates. J.C. Smith also is one of the schools the 6-7 Ford is considering.
“I scored at Thomasville, but we didn’t win enough,” Bates said. “I’m looking forward to scoring, distributing — and winning — at Johnson C. Smith.”