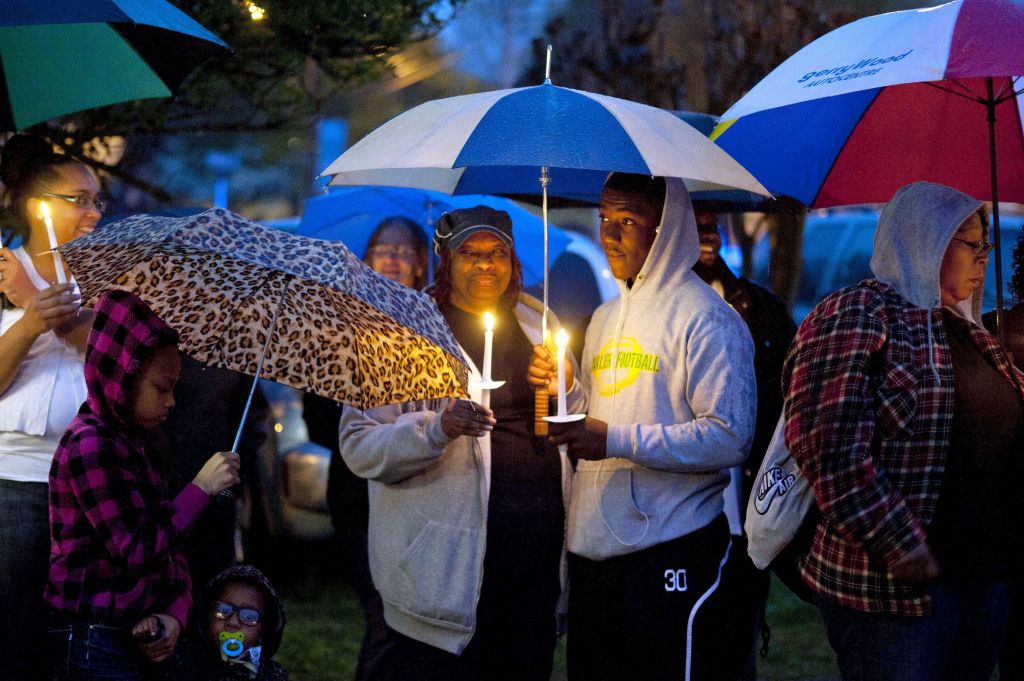 SALISBURY — A crowd gathered in the cold rain Friday night to mark the one-year anniversary of the death of Salisbury Police Sgt. Mark Hunter, who friends and family said loved and protected the West End community.
“As you know, Mark did not live in the West End, but the West End belonged to Mark,” said Shirley McLaughlin, whose brother owns McLaughlin’s Grocery on West Monroe Street, the site of the candlelight vigil.
Hunter called the store “headquarters” and used the business as a home base as he policed the West End, working as a patrol officer, canine handler, drug investigator and finally, police sergeant.
Hunter died from a heart attack. Since his death, many residents live in fear and stay inside rather than walking in the neighborhood and gathering on porches, people said.
“I think about how it used to be and how it is now,” William Peoples said. “… He took it personally to make sure this was a safe neighborhood.”
The West End has seen an uptick in gun violence, including several homicides and drive-by shootings in the past year. Several residents and advocates pleaded with City Council last week to stop the gun-related crime that has plagued the community.
A grandmother told of a stray bullet that lodged in her granddaughters’ bedroom on March 22 while the children slept. The bullet came from a nearby gunfight that left three men shot and injured but alive.
A man described the terror his elderly parents have felt since bullets entered their bedroom April 7, also the result of a gunfight.
Cindra Bognuda said Hunter helped keep a lid on crime in the West End with strong law enforcement but also sincere concern for residents.
“Where are you at now, because we sure need you,” Bognuda said.
She said Hunter saved her son by putting him in jail. He took time to stop and ask about people and required children to show respect, she said.
The sign on the front of the store that bans sagging pants was attributed to Hunter.
Known as “Big Train,” “Sgt. Everything” or simply “Hunter,” the father, grandfather, brother and uncle has been visiting people in their dreams. Several family members said they have had visions of Hunter as their protector. Joyce Hunter said her late husband is always on her mind, and she regularly talks to him.
Early one morning, heavy thoughts kept her from sleeping, so she rose to do laundry. When her phone rang at 5:30 a.m., Joyce said her heart sank.
But rather than bad news, it was her daughter calling to say that Hunter had just appeared in a dream and instructed her to call her mother.
“I hear everything she says,” Hunter told his daughter.
“I needed that,” Joyce Hunter said.
Sisters Theresa DeBoyace and Tammy Johnson said Hunter was always their protector. Brother Scott Douglas, who bears a remarkable resemblance to Hunter, thanked the West End for the “love you gave him, the love you showed him.”
Although son Robert Hunter could not attend due to his military service in Iraq, children Tasha Reese, Omar Lipscomb and Dominique Luster shared sentimental and humorous stories about Hunter, known for his boisterous laugh, creative vocabulary and sometimes embarrassing nicknames.
Hunter called Karen Biernacki, a former assistant district attorney for Rowan County, “Nack Nack.” The two worked together for years arresting and prosecuting criminals, and Biernacki said she loved Hunter like a brother.
“We were battle buddies,” she said. “I knew he had my back.”
Contact reporter Emily Ford at 704-797-4264.