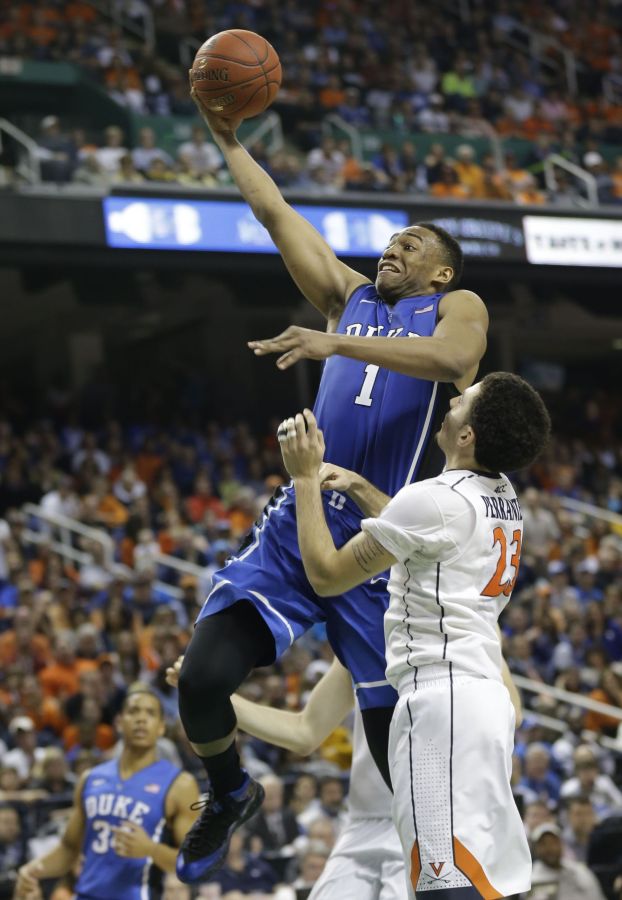 Parker going to the NBA

Jabari Parker is hoping to become Duke’s latest one-and-done star to become the No. 1 pick in the NBA draft.
The 6-foot-8 All-American forward said Thursday he’ll enter the NBA draft after being the highest-scoring freshman in Duke history. He was also the first freshman to lead the Blue Devils in scoring and rebounding, and the first freshman in three decades to be selected team MVP.
Now he has the chance to do what Kyrie Irving did in 2011: follow a one-year stay at Duke by being the first name called in the June draft.
Coach Mike Krzyzewski said in a statement Thursday it was “an honor for us to have him in our program.” In an essay posted on SI.com, Parker said the NBA offers him the best chance to develop both as a player and off the court.
“I realize how much of a privilege and an honor it is to join the ranks of the NBA,” Parker wrote. “I will do everything in my power to help deliver championships to the franchise that drafts me. At the same time, I recognize the obligation to represent the league in an admirable way off the court.”
Parker played in high school at Chicago’s Simeon Career Academy and was frequently mentioned along with Kansas’ Andrew Wiggins as possible No. 1 picks before ever playing a college game.
Parker led the Atlantic Coast Conference with an average of 8.7 rebounds while his 19.1 points were second only to North Carolina State’s T.J. Warren, who entered the NBA draft last week.
“Jabari could not have been better,” Krzyzewski said. “He is the epitome of what you would want a basketball player to be — outstanding every day on the practice court and in the classroom and a very humble young man.
“He had a fantastic freshman year and is so deserving of the opportunity to play in the NBA and follow his dream.”
Parker is listed as the No. 2 draft prospect on Chad Ford’s Top 100 on ESPN.com, the No. 2 pick in a mock draft on NBAdraft.net and No. 3 on DraftExpress.com.
It had long been believed that Duke would be a one-year pit stop for Parker on his way to the pros. But even late into the season, he insisted he was undecided, saying he wanted to play at the level that would best help him grow.
When he received the USBWA’s Tisdale Award as the nation’s top freshman this week, he said he planned to meet with Krzyzewski and reach a decision Wednesday.
In his SI.com essay, Parker said he had “gotten pretty attached to life at Duke and I don’t want to utter the word goodbye.” He also noted that the careers of professional basketball players — his father, Sonny, played six seasons in the NBA — last only so long.
“The lucky ones play until their mid-30s,” Parker said. “With that perspective, I shrink my professional career with each year that I remain in college. It’s ironic, but true.”
Parker — the fifth Duke player to enter the draft as a freshman — said he planned to continue working toward a college degree. He is Mormon and said he would put a two-year mission on hold.
From Day 1, he and Rodney Hood — a redshirt sophomore transfer from Mississippi State — were the focal points for a Duke team that spent much of the season in the top 10 and looked like a Final Four contender. But Duke (26-9) ended the season with a loss to Virginia in the ACC tournament final and a shocking loss to Mercer in its NCAA tournament opener.
Hood hasn’t announced whether he will enter the draft, though Krzyzewski said “I wish we had him for more than one year” after Duke’s ACC tournament win against Clemson last month.
Regardless, Duke is bolstered by the nation’s No. 1 recruiting class, led by top overall recruit Jahlil Okafor along with top-10 prospects Tyus Jones and Justise Winslow.