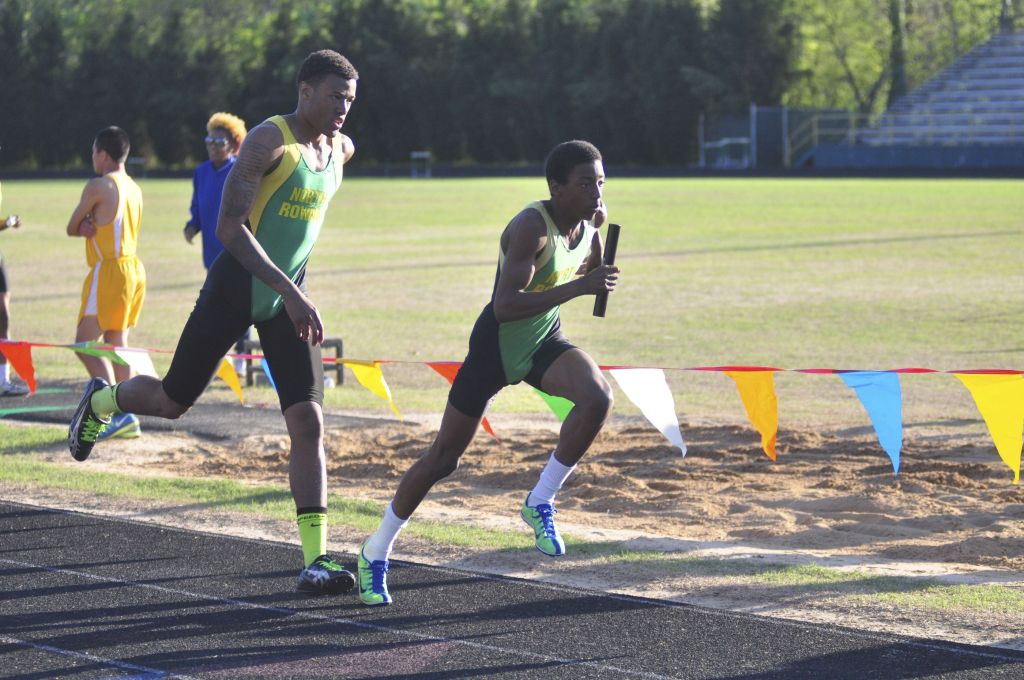 SPENCER — North Rowan’s Isaiah Cromwell crossed the finish line gasping, bent over for a few moments, and still clutching the 4×400 relay baton, made his way slowly to the infield to embrace teammates.
Cromwell’s breathless sprint finished off another succesful day for North Rowan’s boys track team, and his trek to the infield was the only thing North did slowly on Wednesday afternoon.
North sprinters did what they generally have done for a long time — they dominated. The Cavaliers, defending their home turf, won all three sprints and all three sprint relays and they tossed in second places in the 100 and 200.
North outscored second-place Salisbury 77-32 in those six sprints, and that decided who took home gold and who took home silver.
“I feel like we’ve got the best-rounded team here,” sighed Salisbury’s Philip Simons, who won the 800 and 1600 and placed third in the 3200. “But where North is good, they’re just really, really good.”
After four years in 1A, North announced its return to the CCC Track and Field Championships with authority. The final totals read North (160), Salisbury (149), Lexington (85), East Davidson (53), West Davidson (52.5) and Thomasville (47.5).
“I told the guys they had a chance to win today, but they wouldn’t win if they weren’t on point,” North coach Phillip Bush said. “I thought they stayed in there and got it done.”
North got big efforts from sprinters Eric Gadson, Darrius Wallace, Xavier Robinson, Michael Robinson, Cromwell and long-striding 6-foot-4 Kenyon Tatum, who was a sight to behold as he burned through the backstretch of the 4×400.
The muscular Robinson, veins almost popping right through his arms, looks like a linebacker and will be a college linebacker, but he runs like a cornerback. He won the 100 and inspired his teammates to victories in the 4×100 and 4×200.
“I’d hurt a hamstring Thursday, but I had to hurry back and run with my teammates today,” Robinson said. “They trusted me to do my part in the relays, and I’m glad I was able to.”
Gadson won the 200.
“My day was pretty awesome,” said Gadson, who ran on winning 4×100 and 4×200 teams and turned in a 22.4 clocking in the 200. “It was my last home meet. I was up for it.”
Wallace won the 400.
North got double-duty golds from Shane Parker in the shot put and discus. Parker was the heavy favorite in the shot, having thrown 45 feet, 10 inches previously, but he produced an unexpectedly strong effort of 47-4 to win easily.
“I told Shane we needed 50 feet from him today,” Robinson said. “He tried to get it. He threw great.”
North firsts kept piling up. Tatum breezed in the high jump,
“I kind of knew I would win that event,” said Tatum, a powerful rebounder for North hoops. “Xavier told me to just pretend there’s a basketball going up, and to go up after it. That helped.”
North’s Shareef Walker took the 110 hurdles. North’s Khandler Kimber won the long jump by the razor-thin margin of a single inch over Salisbury’s Omar Sanders, and North’s Courtney Roseborough ruled the triple jump pit.
Simons was the only Hornet individual winner, but the Hornets did claim a victory in the 4×800.
Salisbury youngster Matt Wasko had a great day with a third, two seconds and a relay contribution. One of Washko’s seconds came in the 3200,
“The first time I’ve run that event,” Washko said. “Usually, I’m in the pole vault.”
The only winners from the four Davidson schools were East Davidson’s Austin Campbell in the 3200, West Davidson’s Daniel Everhart in the pole vault and Thomasville’s Jaquez Taylor in the 300 hurdles.
Hall of Fame coach Robert Steele watched from the bleachers, as Bush, who’s worked with him for 17 years, guided the Cavaliers to the title.
“I never read a book on track — everything I know comes from Coach Steele,” Bush said. “I know he’s proud. The kids just got it done today. Our kids work hard. We couldn’t ask for better ones.”