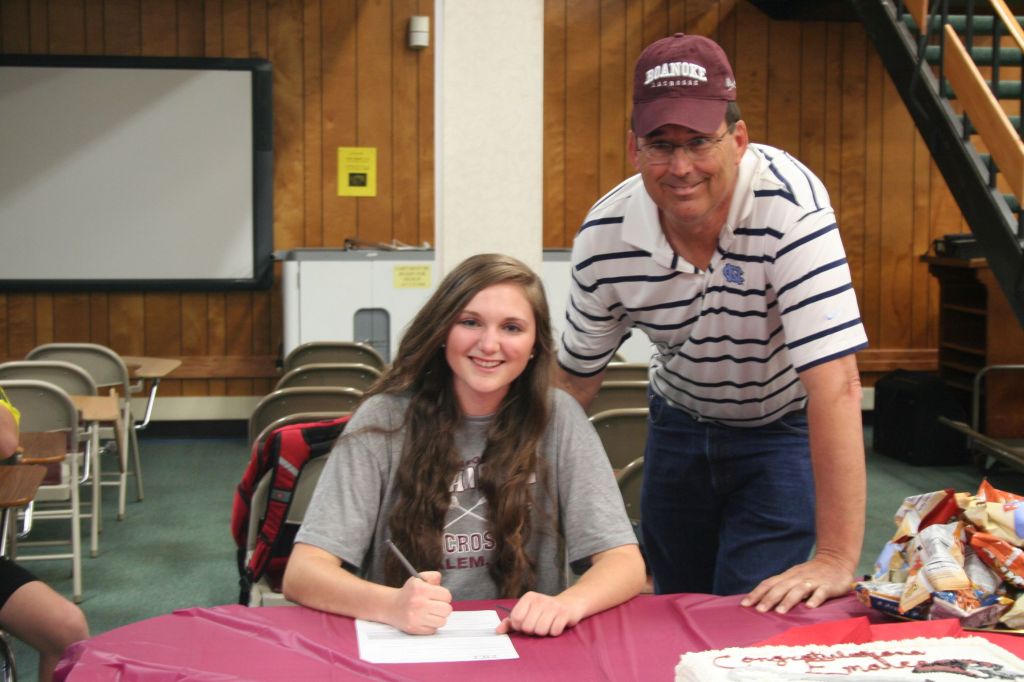 SALISBURY — Scott Maddox, who coaches Salisbury baseball and girls tennis, is not without a sense of humor, and he cheerfully handled the introductions for Emalee Young at the signing party she shared with tennis star Alexandra Drye.
“Emalee has been a really important part of our lacrosse program for many years,” said Maddox before clearing his throat, taking a long pause and grinning.
People started chuckling after a few seconds because while Salisbury wins lots of state championships in lots of sports, it doesn’t have a lacrosse program. At least not yet.
However, that obstacle hasn’t stopped Young from becoming the school’s first lacrosse recruit. She’ll play next season at Division III Roanoke, where her brother Lewis already is a member of the tennis team.
So how does a girls at a non-lacrosse school wind up playing the sport in college?
“One of my friends played lacrosse for Cannon School and she was showing me some things one day,” Young explained. “It started with just fooling around with lacrosse in the backyard, but I got really interested in it and started learning more about it.”
That backyard experiment led to Young seeking club teams and girls to play lacrosse with and against.
She started with the Clash program in Cabarrus County and with the Charlotte-based Queen City Stars.
“After my first year, I started thinking I really wanted to do this at the next level,” Young said.
Young has continued to elevate her game with the Midwestern Force-Southern Storm program that brings together lacrosse ladies from eight states for camps and tournament play. Young competed in her first major tournament in Richmond last June.
“Hundreds of girls are involved and it’s very intense,” Young said. “I’ve only been playing a very short time compared to most of the girls. They have more experience, but that just means I have to work twice as hard.”
Young used to dream about getting lacrosse started at Salisbury.
The sport is growing across North Carolina. Twenty-nine high schools fielded girls lacrosse teams in 2005. The NCHSAA sanctioned the sport in 2009, and by 2013, there were 58 N.C. high schools with girls lacrosse programs.
There are more boys programs than girls — 81 at last count. Neighboring 4A schools such as A.L. Brown and Davie have started boys programs, although they don’t yet have girls teams.
Lacrosse’s orgins date back at least to the late 1600s. There were colonial reports of games being played by Native Americans in Virginia with crooked sticks and balls stuffed with hair.
Lacrosse in North Carolina is still a game mostly played in the metro areas, with Raleigh/Cary, Chapel Hill, Charlotte and Winston-Salem rated as the lacrosse hotbeds.
The obstacles for the expansion of lacrosse to places like Salisbury go beyond finding interested players and buying equipment. It’s a challenge finding experienced coaches and qualified officials.
Boys and girls lacrosse are cousins, but they’re different sports. Field dimensions are different, the number of players is different, and boys play a physical sport, while girls play a non-contact sport.
Young plays the attack position, which, as the name implies, means she’s an offensive player. There are defenders, attacks and a goalkeeper.
Young has put in a lot of hours and a lot of travel at a sport she’s passionate about. It’s paid off with a chance to compete in college and to get an education at a top-notch school. She plans to major in athletic training.
“I love lacrosse,” Young said. “So I’m very excited about this opportunity.”