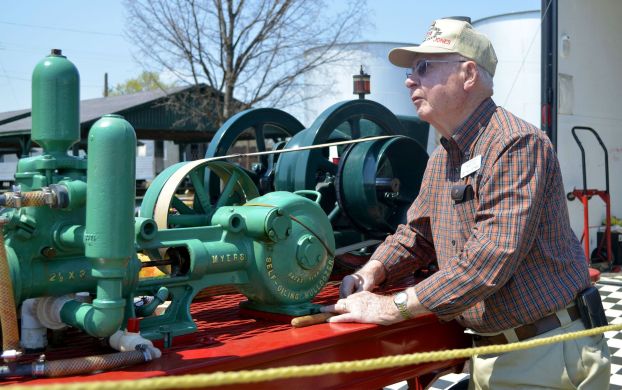 Powerful past preserved at Antique Tractors and Trains Show

SPENCER — Farmers, friends and fans of history gathered Saturday for the annual Antique Tractors and Trains show at the N.C. Transportation Museum.
Organized by the Iron Peddlers Antique Power Club, the display of tractors, antique engines and power equipment drew a crowd to see the machines that powered North Carolina’s agricultural past.
“We like to get together, have these shows and let people know what kind of tractors we have out here,” said Donnie Morrison, member of Iron Peddlers Antique Power Club.
His organization was one of several groups from the region that preserve motors, tractors and other equipment.
Throughout the exhibition field, kids and grown-ups ranged among the brightly colored equipment: trademark John Deere green and gold, the red and gray of Ford’s tractors and the burnt-orange Allis-Chalmers machines.
And the yard rang with the steady thump of the hit-or-miss engines, and the diesel clatter of tractors running.
Morrison said people might be amazed at the variety, especially if they’re not used to the way farming was done 70, 80 or 90 years ago.
“A whole lot of tractors were made. … A lot of the (brands) disappeared kind of early,” Morrison said. “Some of these are kind of rare.”
Norris James came to the museum with what he said is one of the hardest tractors to find in this part of the country: a 1934 Plymouth tractor.
Not to be confused with Plymouth automobiles, the Plymouth tractor was made by a separate company. Most of them were used in the northeastern states, James said. As far as he knows, his is the only one currently in North Carolina.
“They made 214 of them, and they only made them for one year,” James said. “This is the 32nd one that was made.”
Unlike other antiques that might get sold off by the later generation, James said, oftentimes antique farm equipment is passed down.
“You can’t buy them. They want to keep them,” James said. “They’ll say, ‘My son’s going to get this one, or my grandson, it’s not for sale.’ ”
From the Earth Master, a brand of farm tractor, to the specialized Sand-Pro — a little bigger than a lawn mower, used on golf courses — the selection of farm equipment showed the broad range of machines used in agriculture and business.
The hit-or-miss engines, meanwhile, reflected another aspect of farming past, Morrison said.
“Those were power sources,” Morrison said, gesturing to a display booth where one such motor kept up a steady rhythm.
From the 1910s through the postwar years, Morrison said, “they used a lot of those on the farms to run various things. Pumping water, grinding feed … you could hook them up with a belt to almost anything.”
Nearby, an antique motor hooked to several other pieces of vintage equipment made a spectacle for kids and adults alike to appreciate.
Atop a former railroad baggage cart, a 1919 Fairbanks Morse 3-horsepower engine turned an alternator and a water pump.
In turn, a cedar water wheel turned next to it, powered by the water. On the sides of the wheel, neon tubes flashed on and off.
And from the very top, a blower filled with soap solution periodically sent a cascade of bubbles out over the crowd.
The contraption was built by Ernie Jones, who said he did the wiring and connections himself, right down to the homemade wiring that flashes the neon on and off as the waterwheel turns.
“I used to go to tractor and engine shows a good bit,” Jones said as a steady crowd of watchers gathered, waiting for the next burst of bubbles to appear.
Jeff and Samantha Beaver, of Salisbury, brought their kids out to the museum for the show.
“Our little boy loves tractors and stuff, and it’s good to have free events to take the family out to,” Samantha Beaver said.
Many also went on to take the paid-admission tour of the N.C. Transportation Museum itself, where train tours ran throughout the afternoon.
Bailey Beaver, 3, was excited to take part in the kiddie tractor pull — a pedal-powered event for children.
Elsewhere, Beverly Garrott, of Yadkinville, caught up with friends at the tent for her club, Piedmont Antique Power Association, based in Mocksville.
Garrott said her club had nine exhibitors Saturday, from farm equipment to a unique kind of car.
Sonny Howell, of Yadkinville, brought his Model T “doodlebug” — a homemade car with a small wooden bed, wooden chairs and a platform on top of a steel frame.
Under the “hood” — if you could call it a hood — are a Chevrolet transmission and a 10-horse Kohler tractor motor, Howell said.
“It’s just parts and pieces,” Howell said. “I’ve messed with cars over the years.”
Howell said he’s restored other antique tractors over the last 40 years, including a kerosene-powered Rumely Oil Pull — and he’s got the pictures to prove it.
As for the “doodlebug” and other jalopies, Howell said, “a few years ago, these were fairly plentiful” — and by “a few years,” he meant the 1940s.
With wartime scarcity, Howell said, farm families had to do what they could for transportation, even if that meant building a car from scratch.
“I do a little engineering, and I love to tinker,” Howell said — and shows like this one attract others with similar loves.
“You meet the nicest people, people with hobbies, engines we’re collecting, tractors we’re working on,” Howell said.
“Myself, I’ve never been on a farm, but I’ve learned a lot about tractors,” Garrott said.
And it’s a field of knowledge, and an era of history, that needs to be preserved, Morrison said.
“When the older generation is gone, I don’t know. The younger generation don’t seem to have too much interest in it,” Morrison said.
But with the number of kids and families out at Saturday’s event, there’s hope for a renewed interest in the machines that built American agriculture.

For more than 80 visually impaired golfers hitting the miniature greens Saturday at Dan Nicholas Park, being blind was not... read more