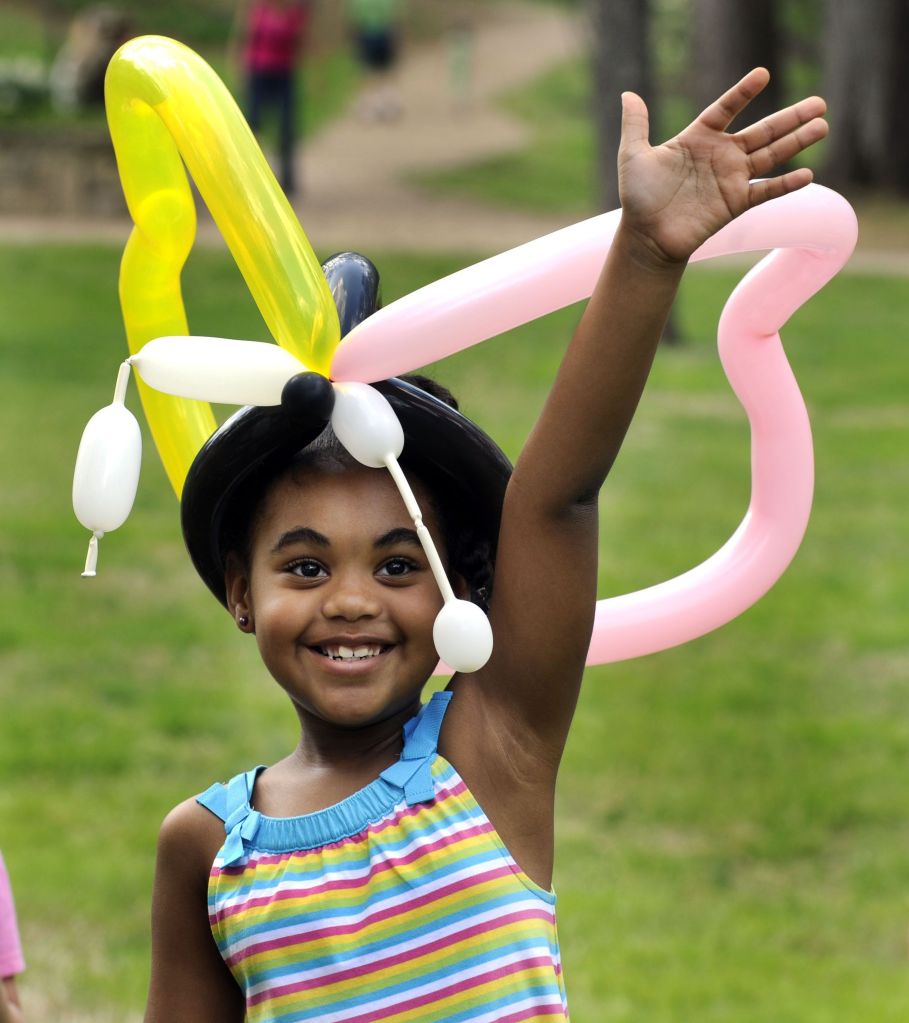 SALISBURY — The annual Elizabeth Holmes Hurley Park celebration always serves as a practical guide to spring.
You can learn, among other things, how to plant a tree, in what order to set out your vegetables, why taking a soil sample is important and how to keep slugs away from your hosta.
But there was an entertainment side, too, to Sunday’s 26th annual Hurley Park celebration. The Edwards Family kept things hopping with its gospel bluegrass music by the gazebo.
Local artists set up shop with samples of their work under shade trees. The Salisbury Symphony offered its musical petting zoo to give children opportunities to get hands-on close to instruments such as violins and trumpets.
Glen Yost drew large groups of children and adults to his feats of magic. And thanks to a talented clown, every kid in the park seemed to be wearing balloons or holding balloon animals.
Artist Connie Loflin Peninger bravely put out two blank canvases and allowed kids to stop by and lend their interpretive strokes throughout the afternoon. The finished artwork was featured on her Facebook page (artbyconnieloflinepeninger) later Sunday evening.
If that wasn’t enough, the Hurley Park staff and board offered plenty of free popcorn and Cheerwine as refreshments. Many people also realized the lovely Sunday afternoon was a perfect time for a stroll through the garden park, which has come to life with spring.
Hurley Park board member Elaine China said the scheduling of the annual celebration is fairly simple. Unless it conflicts with Easter, the event is always held the second Sunday of April, often the same day as the last round of the Masters golf tournament.
“We try to time it with the bloom,” China said.
Only one Hurley Park celebration has ever been rained out.
As she relaxed on a stone wall listening to the music, Tiffany Day of Spencer said the spring celebration was a good escape from her family’s weekend of working in the yard.
Her boys, 10-year-old Arizona and 7-year-old Addison, seemed to agree, as they were in full balloon gear.
“It’s good to be around other folks and get away from the dirt at home,” Day said.
Day’s mother encouraged her to attend the park celebration, especially for the music. Day already was familiar with Hurley Park, having come here to see two nieces pose for prom pictures, and also for a friend’s wedding pictures.
“It’s a great park to come and take photographs in,” Day said.
Marjie Aggers stopped by the Rowan County Extension Master Gardeners table for advice on how to keep slugs away from her hosta. One tried-and-true method is to set out saucers of beer, which attract the slugs and do them in.
Carol Comer also told Aggers to try surrounding the hosta bush with golf balls or the prickly balls from sweet gum trees — slugs aren’t too thrilled about having to crawl over those kinds of obstacles.
Aggers was going to try the sweet gum approach.
The Extension Master Gardeners table included Comer, Ed Joyner, Connie Sherrill, Eleanor Sandifer and Carolyn Glasgow.
“This is half my church,” Julie Steele said, strolling up to their table, which had information on taking soil samples, the next Rowan County Special Waste Recycling Event (May 7), landscaping and lawn care advice and a quick reference guide to vegetable gardens.
“That tells you what to plant and when to plant it,” Joyner said.
Comer offered maybe the best advice for having the best lawn and garden.
“When all else fails,” she said, “take a soil sample.”
Carol Dunkley was selling her paintings of roosters, and she promised she never paints the same rooster twice.
“This one doesn’t require food and it doesn’t wake you up,” Dunkley said. “… Who would have thought everyone would love roosters?”
She took up painting about 14 years ago, Dunkley said, once the grandchildren didn’t think she was so cute any longer.
Susan Trivette, a flutist and education director for the Salisbury Symphony, was among the people manning the musical petting zoo. Besides giving children the excitement of holding and playing a violin or trumpet, the tent also gave the symphony folks a chance to talk up their coming events, such as the “Out of This World” concert May 10 at Catawba College and “Pops at the Post” June 7 in downtown Salisbury.
Grace Bemus, 8, stopped by Peninger’s table to paint. But she also was wanted back by the gazebo, where she was supposed to play fiddle and sing a couple of songs with her 11-year-old brother, Gabe.
Grace and Gabe, who plays guitar, are students of Alex Edwards, the banjo player for The Edwards Family. The Bemuses harmonized and played well with Alex accompanying them.
Mark Martin, the city’s landscape guru, and Rowan County forester David Poole of the N.C. Forest Service demonstrated the proper planting of a crape myrtle tree near the park corner of North Craige Street and Annandale Avenue.
The best time to prune trees, such as crape myrtles, is when they’re young, Martin said. “They’re kind of like kids, I guess,” Martin said.
But Martin also encouraged folks to give Mother Nature some leeway, if you can.
“Mother Nature’s an amazing thing,” he said. “Sometimes she can give us amazing forms.”
A good bit of advice for planting a tree: Dig a hole twice as wide as the width of the root ball.
Someone mentioned how difficult the spring can be for people with allergies, given all the pollen in the air.
“I don’t want to offend anyone,” Martin said, “but right now trees are having sex.”
No offense taken, as this thing called spring blooms forward.