Lighting the way at Dixonville Cemetery 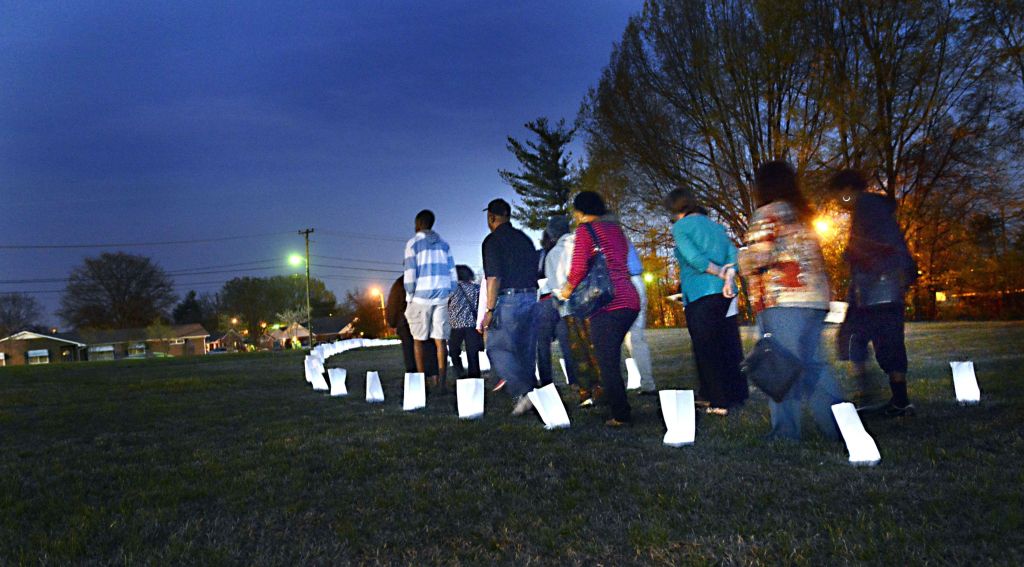 SALISBURY — Some people walked hand-in-hand. Others strolled quietly by themselves. Still others made their way around Dixonville Cemetery Friday night in groups, enjoying the mild spring evening as it went from twilight to dark.
Close to 70 people paid honor Friday night to those buried in Dixonville by walking on a trail made of more than 500 luminarias winding through the cemetery.
This wasn’t the fundraising kickoff to the Dixonville-Lincoln (School) Memorial Project — though that day will eventually come.
“We’re going to have to be very much dependent on your voices to take that message forward,” Task Force Chairman Fred Evans said.
Rather, Friday night was just a reminder of a place to be remembered and a community that definitely still is.
The Dixonville-Lincoln (School) Memorial Project Task Force put together the “Lighting the Way” evening, which started at First Calvary Baptist Church.
As the sun started sinking, participants followed the trumpet of Emory Jones, playing “When the Saints Go Marching In,” out a side door of the church and across the street to the cemetery.
Before Bishop Harvey Rice’s benediction, Jones led the singing of a verse of “Amazing Grace,” followed by a solo verse on the trumpet.
The walk then passed by every big tree in Dixonville Cemetery. By the time the last walker was finished, it was dark and time to go home, though the luminarias, under a three-quarters moon, were a beautiful sight to see.
Earlier at the church, the task force showed its website video and some of the memories Dorothy Gilmore, Fannye Holmes, John Mackey, Juanita Ramsey, Lauresa Robinson, Margaret Santino, William Peoples and William Tugman still hold dear.
They spoke of taking shortcuts through the cemetery to reach Lincoln School. They recalled hearing the mill whistle at 3:45 p.m. and knowing, as children, they had 15 minutes to reach home from school.
They remembered stopping by the pecan and persimmon trees in the cemetery. They talked about being careful not to step in any holes.
Peoples said he still believes the memorial project, once estimated at $350,000, can become one of Salisbury’s most visited spots when it is successfully accomplished.
Grace Henderson McMullen Littlejohn, 96, attended the meeting from Washington, D.C., and she remembered, not with particular fondness, the government coming in and taking houses by eminent domain in its effort to clean up Dixonville.
“I thought it was unfairly done,” Littlejohn said.
The urban renewal took homes, but many of the homes had raised children who ended up attending and finishing at Livingstone College, Littlejohn said.
Evans said many of the houses taken were substandard, but many others weren’t. Out of all the properties his mother owned in Dixonville and on the East End, the only thing she was left with after urban renewal was a mortgage, Evans said.
Urban renewal benefited the masses, Evans said, “but there were casualties.”
“For the most part, what you see now is good,” he said.
Though the old Lincoln School sits shuttered and in disrepair in the distance, the Lincoln Pool in the summer is still filled with the shouts, laughs and splashes of children. A basketball court next to it sees plenty of players year-round.
In the Dixonville Cemetery off Old Concord Road, the stones fit the definition of randomness. Only 28 markers survive and they are in all manner of age and condition. You can easily stop and look at each monument, as if walking through a museum.
In recent times, the community put up its own highway historical marker for Dixonville Cemetery, the first city-owned burial ground for African Americans. Burials occurred here from the mid 1800s to the 1960s, when this side of town was pushed down in the name of urban renewal.
Betty Dan Spencer’s years of research have found documented evidence of close to 500 people who are buried in the Dixonville Cemetery. She relied on death certificates, obituaries, records of funeral homes, census mortality schedules and existing tombstones.
The list remains a work in progress, and Spencer is always looking for information on additional burials, corrections to the names she has and photographs of individuals buried here, or of the graveyard in earlier days.
A number of men and women buried in Dixonville were enslaved during the first part of the 19th century.
The oldest gravesite known — and the monument that still stands — is for Mary Valentine, who died in 1851. Some of the more prominent African Americans in Salisbury are thought to be buried here. They include Bishop John Jamison Moore, who founded the AME Zion Church in western North Carolina; and the Rev. Harry Cowan, a legendary minister who was born into slavery but went on to establish 49 churches and baptize 8,500 people.
It was Cowan who after the Civil War and emancipation established Dixonville Baptist Church, which became today’s First Calvary Baptist, standing north and within sight of the cemetery.
Salisbury’s urban renewal here began in 1963 with the demolition of the old Shaver Street Grocery. Forty buildings were down by the end of that first year, and in all, 230 structures were demolished and replaced by new public housing and 197 families were displaced over the five-year project. Today, only the boarded-up Lincoln School and this patch of ground still maintained as a city cemetery remain of what people once called Dixonville.
In 2010, then Salisbury Mayor Susan Kluttz called for the appointment of a task force to create a Dixonville Cemetery-Lincoln community memorial. Its straightforward goal was to raise the prominence of an early African-American cemetery, interpret its history and pay respects to all those buried here, whether their graves are marked or not.