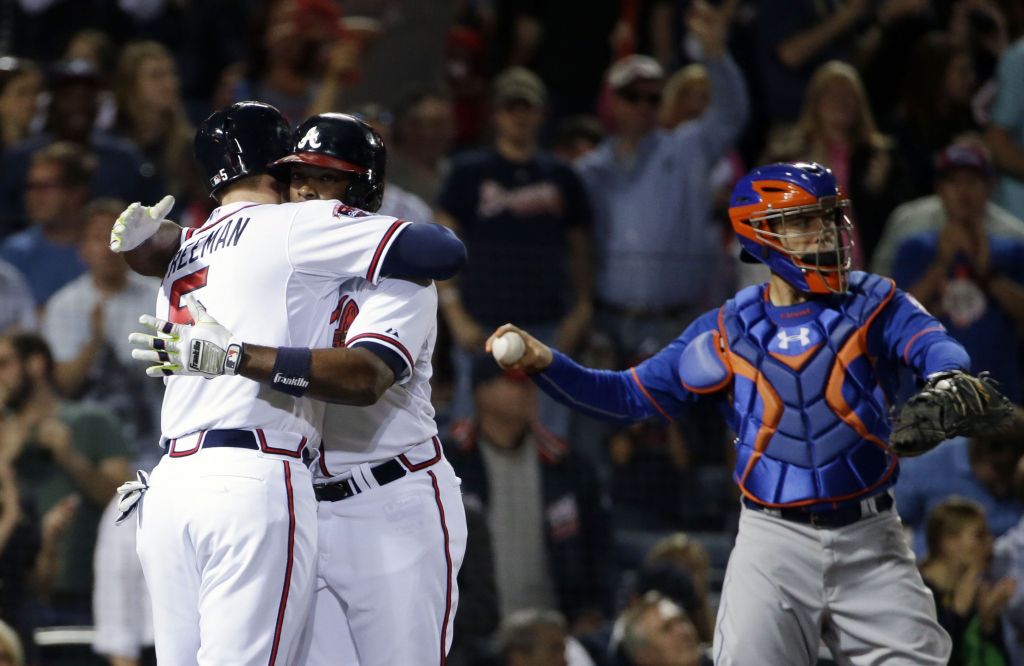 ATLANTA — Eric Young Jr. is proving he’s an important part of the Mets’ winning formula.
That’s especially important with New York’s outfield about to become more crowded.
Young got three hits, stole three bases and scored four times as the Mets overcame Justin Upton’s two home runs to beat the Atlanta Braves 6-4 on Thursday night.
Young stole five bases in the series as the Mets won two of three from Atlanta.
“He’s such a great kid, you root for him all the time, and tonight he showed you he can win games for you,” manager Terry Collins said.
Young has joined Curtis Granderson and Juan Lagares in the Mets’ outfield. Chris Young could be moving closer to making his return from the disabled list with a right quadriceps injury.
Soon Collins could face difficult decisions in the outfield.
“No question about it,” Collins said, adding that Eric Young “makes things happen.”
“We saw it tonight,” Collins said. “The guy creates runs.”
“We talked about it all spring and all winter, what Eric Young brings to the table. When he gets on base he scores runs. He showed it again tonight.”
Young had two steals in the Mets’ 4-0 win on Tuesday night.
“Anytime you do your job at the top of the lineup, especially with a couple of guys behind me driving me in, it’s a lot of fun,” Young said.
The Mets broke a 4-all tie in the seventh. Luis Avilan (1-1) gave up a leadoff single to Daniel Murphy, who scored on a two-out single by Juan Lagares off Gus Schlosser. Murphy drove in three runs with three hits.
Carlos Torres (2-0) allowed only one hit in two scoreless innings. Jose Valverde pitched a perfect ninth for his second save.
Led by Young, the Mets stole five bases, their highest total since May 28, 2011, against Philadelphia. Young also used his speed to lead off a two-run third inning with a bunt single.
“Young scored four runs by himself,” said Braves manager Fredi Gonzalez, who added, “that pretty much beat us.”
Upton drove in three runs with three hits. He had no homers before his breakout game. He hit an opposite-field homer in the second inning before his long two-run blast to left field in the third.
“Tonight I was just comfortable,” Upton said. “The only thing I can do is try to take that same exact feel to tomorrow night and the next day and try to make something of it.”
Older brother B.J. Upton hit a triple after receiving pregame batting tips from former Braves star Chipper Jones.
Justin Upton’s second homer gave the Braves a 4-3 lead.
Mets starter Jenrry Mejia, obviously frustrated, slapped his mitt and then appeared to throw the glove to the grass.
“I just threw my hand up and the glove went out of my hand,” he said.
Mejia gave up four runs in five innings on six hits and four walks. Atlanta’s David Hale also had control problems as he gave up four runs, three earned, in 4 1-3 innings on five hits and five walks.
The Mets tied the game in the fifth on a leadoff triple by Young and Murphy’s single. The Mets loaded the bases on two walks by Hale, but reliever Anthony Varvaro struck out Lagares and ended the inning on Travis d’Arnaud’s groundout.
Ike Davis was 0 for 3 with two walks and a RBI in his start at first base. Collins said Lucas Duda, who had a pinch-hit single in the eighth, is still the starter.
Braves shortstop Andrelton Simmons was held out with a jammed right wrist. He said he hurt the wrist in a home-plate collision in Wednesday night’s game. He is day to day.
Ramiro Pena, making his first start of the season, replaced Simmons and had one hit.
NOTES: Former President Jimmy Carter and his wife, Rosalynn, sat near the Braves’ dugout. … Hale is Atlanta’s first starting pitcher to give up more than two runs this season. … Young was 2 for 2 with two singles in an extended spring game in Port St. Lucie.
… RHP Dillon Gee will be on the mound when the Mets open a weekend series at the Angels, who will start LHP Tyler Skaggs, on Friday night. … Atlanta RHP Julio Teheran will face Washington RHP Tanner Roark as the Braves’ homestand continues.