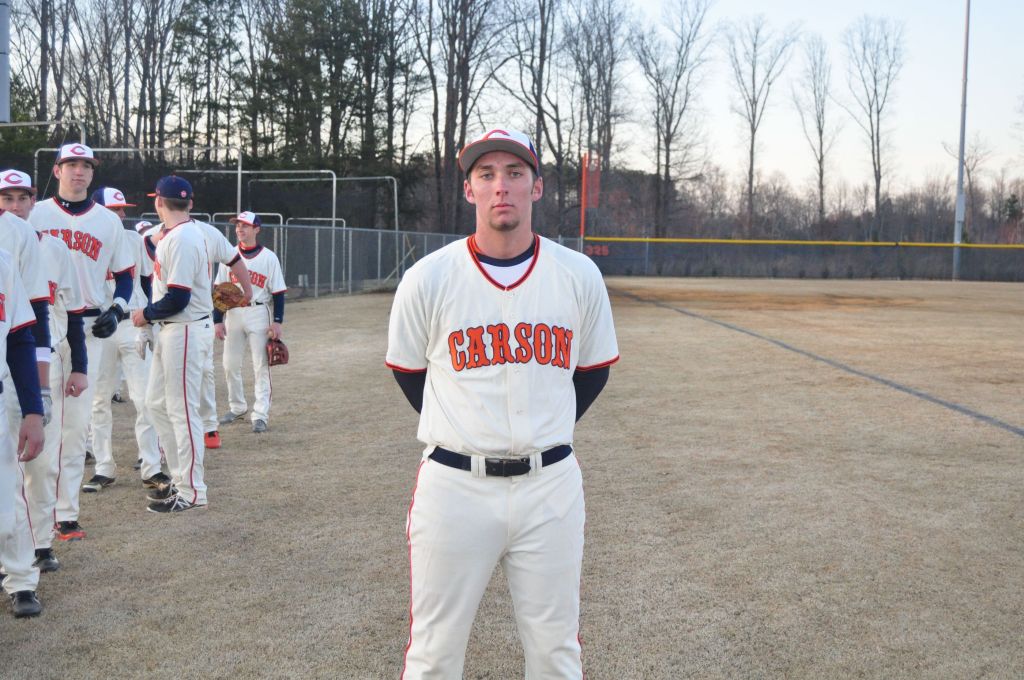 CHINA GROVE — Matt Saul’s “twilight” double in the sixth proved to be the difference Wednesday night as Carson squeezed past Northwest Cabarrus, 3-2.
A game-long pitching standoff between the Cougars Dillon Atwell and Trojan Josh Hall had the two SPC teams deadlocked at 2 heading into the bottom of the sixth. When pitch runner Matt Jones was gunned down at the plate on a grounder Carson had two outs and John Patella on first. It appeared that another opportunity had been wasted.
But junior third baseman Matt Saul saved the day by whacking a ball high and deep to left field. Defender Phillip Faggart apparently never saw the ball against an early evening twilight sky as it dropped in for a double. Patella raced all the way around from first to give the Cougars their first lead at 3-2 and they made it stand up.
Saul fell behind with two strikes as Hall had him way out front with his slider. “Then he threw me one inside that I turned on and tried to get my hands on it.,” Saul said. “I have to give thanks to JP (Patella) for his wheels to score the run.”
The win kept Carson in striking distance of the top of the South Piedmont conference at 7-4, 11-4 overall. The tough luck loss dropped the Trojans to 2-9, 3-10 and ended their two-game win streak. The Cougars have now won five in a row.
“ I told the players that we persevered tonight, “ Carson head coach Chris Cauble stated. “Northwest has played everybody tight and their guy (Hall) just kept us off balance and way out front. Luckily we did enough to scratch out three runs then Dillon held them in check.”
Atwell improved his record to 3-2 with his fourth complete game effort. He had his curve working well but still had to work around seven Trojan hits, including three doubles.
“ I didn’t really have my best stuff tonight,” the senior righty noted. “But my defense played great and that really made the difference.”
Atwell specifically credited the defense of Patella at second base with some critical stops that squashed Trojan threats. He also saluted Saul for his clutch double that proved to be the game winner.
The Trojans did mount a serious threat in the top of the seventh when two runners reached base. But Atwell recorded two of his five strikeouts in the final frame to slam the door.
“Anytime you are down one and you have the tying and go-ahead runs on base you have done the job,” NWC veteran coach Joe Hubbard said. “You just have to wait for the big hit but that doesn’t happen often.”
Hubbard also confirmed that his left fielder Faggart never saw the ball off the bat of Saul in the sixth that brought home the eventual game winner. “He did all he could to get back there but just couldn’t find it against the evening sky. It is a shame that’s how the game turned.”
The visiting Trojans struck quickly in the game off Atwell as Tanner Bost singled, stole second and third then scored on a groundout. Carson tied it in their half of the first with some nifty base running of their own.
Michael Morrison stayed hot with a leadoff single then went to third on Heath Mitchem’s single. Carson then pulled off the double steal to tie the game as Morrison raced home when the throw went to second. The Cougars stole five bases in the game, three by Morrison and two by Mitchem.
Carson mounted a serious threat in the third when they loaded the bases with one out on an error, a Mitchem single and a hit batter. Northwest stopped them cold, however, with a perfectly executed 6-4-3 double play.
Northwest edged back ahead in the fourth with two outs when catcher Wyatt Taylor singled then Max Barrios drove him home with a booming double over the left fielder’s head.
Carson responded again in their half of the fourth without the benefit of a hit. Colton Laws was hit by a pitch, was sacrified to second by a bunt then raced to third on a wild pitch. A sharp grounder to first by pinch hitter Brandon Sloop drove in the tying run.
The same two teams will face off again this Friday evening at the Northwest Field.
NOTES: The game had originally been scheduled for Tuesday but was postponed due to wet grounds. It almost didn’t happened again last night when a surprise shower rolled through the Carson campus Wednesday afternoon that brought not only a drenching rain but a dose of pea-sized hail.