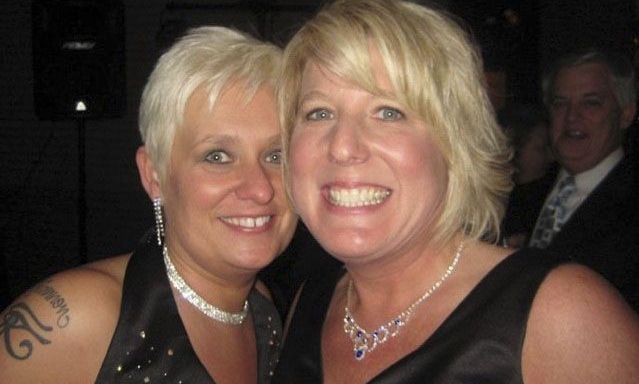 SALISBURY — After winning a national contest sponsored by the American Civil Liberties Union, a Salisbury couple’s dream of being married will come true in the next couple of weeks.
Tamara Sheffield and Maryja Mee were the top vote-getters in the ACLU’s “My Big Gay Illegal Wedding” contest, which asked same-sex couples from states that don’t permit same-sex marriages to tell their stories.
“It was just overwhelming that we’d won this national contest, because of all the efforts of our friends and all the people in Salisbury,” Sheffield said in a phone interview.
Out of over 200,000 votes cast nationwide for some 400 couples, Sheffield and Mee received over 21,000 votes, Sheffield said.
They returned from New York City this past week, where the top five couples had traveled for press interviews.
Those couples will each receive $5,000 to pay for their dream wedding in a state where same-sex marriages are legal.
The marriage won’t be legally recognized in North Carolina, but it will be recognized by the federal government.
Sheffield and Mee’s dream wedding involves a train trip to New York, and so they’ll be boarding a train during the week of April 27 — the specific date has yet to be determined.
Contest organizers, based in New York, are helping the couple plan the details, Sheffield said.
Mee said it’s still not clear whether the couple’s biggest dream will come true: having singer Stevie Nicks of Fleetwood Mac at their wedding.
An advocate for same-sex marriage, Nicks recently officiated a marriage for another couple. Sheffield said friends and supporters have been trying to put the word out on social media, hoping the singer might hear.
Part of the contest was a chance for couples to tell the story of their perfect wedding, and Mee said the Fleetwood Mac song “Dreams” has a special meaning for the two of them.
More so now, Mee said, with their own dream about to come true.
No matter what, Mee said, “I’m looking forward to just riding the train, seeing the sights.”
She said it was an honor to have won the contest with nationwide support.
“It was just a great and overwhelming feeling. We had a good idea, being the lead vote-getters … but to get that official call, it was very overwhelming and very flattering,” Mee said.
Sheffield said the two had made new friends and met some of the people who voted for them, and said the people of Salisbury had backed them.
“Typically, in small towns in the South, you don’t expect that kind of support, but Salisbury has always been supportive of us as a couple, and has been supportive of all people,” Sheffield said.
“We’ve been very fortunate, it’s been nothing but positive from people, and we just love living in Salisbury,” she said.
There’s another contest currently underway via the ACLU website, the “Crash Our Wedding” competition, for those who want to win a trip to the May 19 mass wedding reception in New York for all five couples.
Contact Hugh Fisher via the editor’s desk at 704-797-4244.

Eight Republicans battling in primary for seats on Rowan…