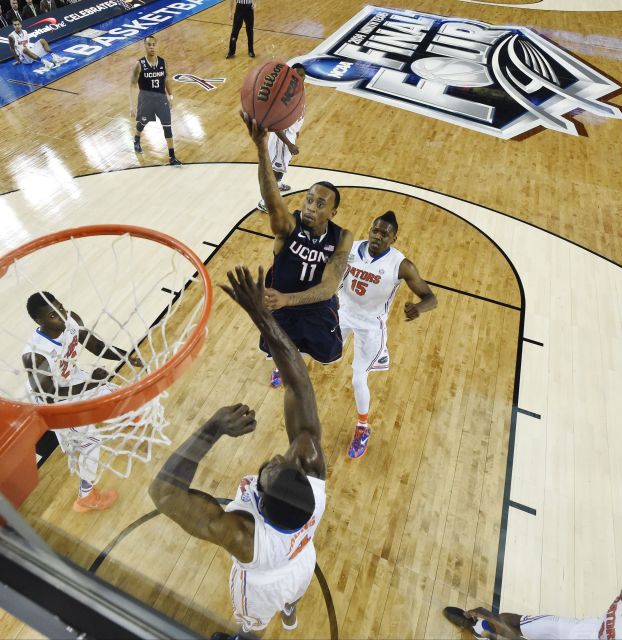 ARLINGTON, Texas — Connecticut didn’t wait for the final buzzer to beat Florida this time.
The Huskies, the seventh seed in the East Regional, had outstanding games on both ends of the court to beat overall No. 1 seed Florida 63-53 on Saturday night.
The win ended Florida’s 30-game winning streak, which began after the Huskies beat the Gators 65-64 on Dec. 2 on a buzzer-beating jumper by Shabazz Napier.
Napier helped seal this game with about 2 minutes to play when he made two free throws for a 59-47 lead. That margin was the deficit the Huskies faced in the opening minutes after a cold shooting start.
“We have been in a lot of dog fights,” Napier said. “We are just an experienced group. We believe in each other and continue to believe in each other. … We are going to win. That is what we do.”
With second-year coach Kevin Ollie in a defensive stance himself most of the game, the Huskies sidetracked the Florida offense by shutting down point guard Scottie Wilbekin and 3-point specialist Michael Frazier II, who scored a combined seven points.
The Huskies were impressive on offense, shooting 55.8 percent (24 of 43) from the field against a team that allowed opponents to shoot 39.9 percent this season.
“Everybody was at Level 5 and that was the most important thing,” Ollie said. “Whomever I put in the game, it was positive and they were productive.”
The Huskies (31-8) will play the winner of the Wisconsin-Kentucky game for the national championship on Monday night.
DeAndre Daniels had 20 points and 10 rebounds for Connecticut, and it was his two 3-pointers in a span of 1:43 that helped ignite the Huskies after they had fallen behind 16-4.
“DeAndre was huge for us,” Ollie said. “He stepped up and really rebounded for us and was pretty much unstoppable.”
Daniels was 9 of 14 from the field and played the entire game.
Napier, who leads the team in almost every category, didn’t dominate, but he finished with 12 points and six assists. He definitely got the better of Wilbekin in a matchup of senior point guards, both conference players of the year.
Napier had two key second half steals on Wilbekin, both of which led to UConn baskets. Wilbekin was bothered by cramps throughout the game.
“It was right when the second half started. I was getting a little cramp, it wasn’t too bad,” Wilbekin said. “I got out of the game and got some ice and it wasn’t really a problem from then on.”
The Connecticut guards were. Florida had 11 turnovers and a season-low three assists.
“That’s crazy, that’s not usually what we do,” Wilbekin said. “All credit goes to them and their guards and the way they were denying and putting pressure on us.”
Patric Young had 19 points for Florida (36-3), which had won all of its NCAA tournament games by at least 10 points. The Gators shot just 38.8 percent from the field (19 of 49), well off their 46.1 percent average.
“I thought they played extremely well today, unfortunately for us I didn’t think it was one of our better games and I think Connecticut had a lot to do with that,” Florida coach Billy Donovan said. “We got off to a very, very good start in the game, and the reason we got off to a good start was our defense was very, very good. Once they got their defense set, I thought we had a hard time dealing with their pressure up top.”
The Huskies used the 3-pointer to open things up inside, hitting 5 of 12 from long range. They had such an easy time scoring inside that they had only basket outside the paint in the final 20 minutes, shooting 63.6 percent (14 of 22).
Florida was just 1 for 10 from 3-point range and the Gators’ most effective weapon through most of the game was an offensive rebound off a miss. They had 12 in the game and turned them into 13 points.
Florida’s defense — which was No. 3 in the nation — was suffocating early and the Gators took a 16-4 lead with a 7-0 run that was capped by a drive by Wilbekin with 9:47 to play.
The Huskies suddenly found their shooting touch. Connecticut made four straight shots and three of them were from beyond the 3-point line — two by Daniels and another by Ryan Boatright. A 3 by Napier brought Connecticut within 20-18 and a three-point play by Niels Giffey gave the Huskies their first lead of the game, 21-20 with 3:18 left in the half. They never trailed again.
In the second half, the Huskies stretched the lead to 37-27 with 13:10 left after a Boatright driving layup. They fought off every rally by Florida, which cut it to 43-40 with 8:03 left, but never threatened again.
Ollie only had to look to the stands at AT&T Stadium to see Jim Calhoun, his successor and the coach who led Connecticut to its three national titles.