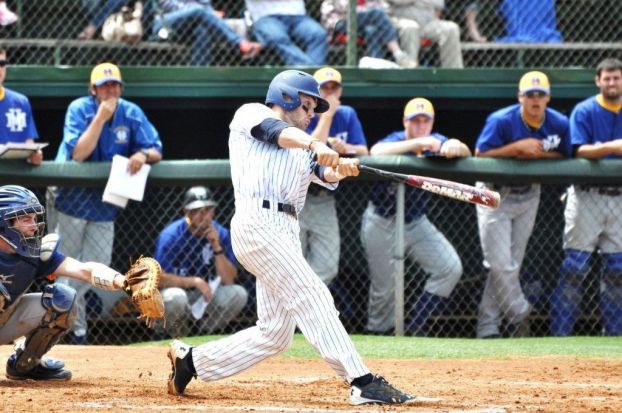 SALISBURY — The ice has melted, the sun is out and Catawba baseball is right back where it always is, competing for the SAC championship — and maybe things beyond that.
Catawba (24-13, 17-6 SAC) started this season 1-7, but a 16-8, 9-3 doubleheader sweep of Mars Hill on Saturday at Newman Park gave the first-place Indians their fourth straight victory. They’ve won 15 of their last 17.
“We started the season in Florida and didn’t play well, and then we came back and lost two straight to Brevard, and that was an eye-opener,” Catawba catcher Jon Wallace said. “But I think we’ve kept working hard and we’ve stayed consistent. If you do those things, the breaks eventually even out, and right now, a lot of things have started breaking our way.”
Slugging catcher/DH T.J. Wharton says Catawba’s surge isn’t rocket science.
“I’ve never played on a team that hits the ball like we’re hitting it,” Wharton said. “We’re hitting like crazy, 10 or more hits just about every game, and everyone in the lineup is hitting. Most games, we’re just going out there and out-hitting the other team.”
When the dust settled on Saturday, the Indians had a .315 team batting average, and they’re averaging nearly 7 runs per game. They’ve hit 36 homers, including nine by powerful newcomer Wharton.
In Saturday’s opener, the Indians banged out 17 hits and greeted Mars Hill with a seven-run first inning. Leadoff man Blake Houston enjoyed a five-hit game, Keaton Hawks drove in five runs, and Wharton and Wallace knocked in three apiece.
All that offense a made life easy for starting pitcher John J. Tuttle (6-2). Tuttle gave up 11 hits, but he just kept firing strikes. He didn’t walk anyone and he lasted into the seventh inning.
Tuttle’s ERA is high — 6.60 after last year’s 3.92 — but he’s still providing innings and wins.
“He’s had some first-inning struggles, but he’s a guy who gets stronger and stronger,” Wharton said. “Once he’s gotten past that first inning, he’s pitched like the ace that he is.”
Catawba also had some defense in the opener, including a brilliant diving catch in right-center by center fielder Houston that ended the game.
“That play alone made it worthwhile for everyone that came out here today,” Catawba coach Jim Gantt said. “It’s fun to watch guys hit, but it’s even more fun to see someone make a play like that.”
Houston’s teammates were not astonished by the catch. They’ve seen him do it before.
“Blake is just superhuman,” Wallace said with a laugh. “He can make crazy plays.”
The nightcap belonged to Catawba’s young pitcher Shaefer Shepard (5-1), who has been tremendous all season. Shepard has a 1.72 ERA and he was in control for five innings, holding the Lions to one run and three hits. Ryan McClintock pitched the sixth, and after Joe Watson ran into some trouble in the seventh, Sean Grant got the last three outs.
“Shepard has good velo on his fastball, but the slider is his go-to pitch and he threw sliders about 40 percent of the time,” Wharton said. “When he has his good slider, no one’s hitting it.”
Mars Hill put a talented hurler on the hill to oppose Shepard, but Catawba knocked out Dale Innes, who was a Clemson recruit out of high school, with a three-run first and a five-run fourth.
The fourth began with a walk to Julio Zubillaga, and Craig Brooks (the winning pitcher in Friday’s series opener) bunted Zubillaga to second. Malachi Hanes scored Zubillaga with a hit, and Hanes moved to third on Cameron Beard’s single and scored on a wild pitch to make it 5-0.
Innes almost escaped further damage, but Paul Kronenfeld beat out a tapper and Hawks was hit by a pitch to fill the bases. Ethan Satterfield’s two-out RBI single and a two-run, two-strike single by Wharton were backbreakers for the Lions.
“That pitcher has a very good curveball and he got me down 0-2 quick with two good ones,” Wharton said. “But we had the bases loaded, so he probably didn’t want to spike one. He left a pitch up and I was able to drive it the other way and get the runs in.”
Catawba had 12 hits in the second game. Hawks, Satterfield, Zubillaga and Beard had two each.
“Early in the season we just didn’t hit, and when you don’t hit, the pitching mistakes you make and the defensive mistakes you make get magnified,” Gantt said. “But these guys have kept battling and now we’re scoring runs. I’m real proud of how this bunch has come along.”
It’s a veteran team. Postgame pictures were taken of the seniors, and most of the 11 that were posing were key players who have contributed to championships.
“Especially when John (Tuttle) pitches, we’ve got seniors all over the place,” Wallace said. “It’s a great class to be going out with, and we’d love to make a run.”