Students get to see, touch ancient copy of Torah 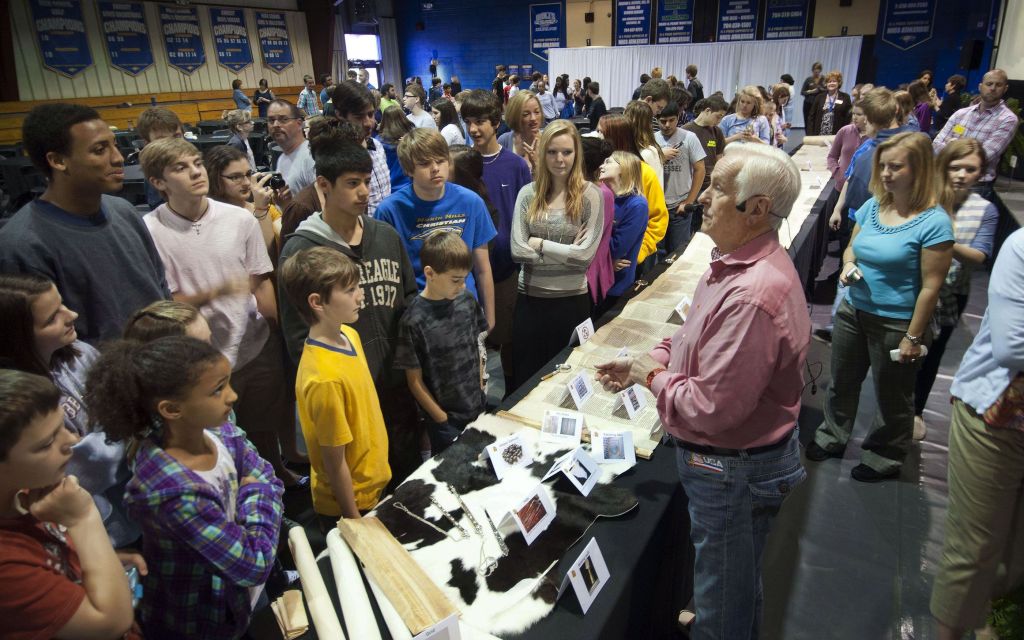 Students at North Hills Christian School had the rare opportunity Friday to see and touch a 564-year-old scroll containing the Torah during a presentation from prominent Christian author and speaker Josh McDowell.

Between McDowell’s three sessions, students gathered around the two long tables where the 72-foot scroll was partially rolled out. Some examined, and even touched, the margins of the document. Others crowded around McDowell, who stood toward one end of a table as he explained how each artifact was used to make copies of the Torah, or the first five books of the Bible.

McDowell stressed how unique this experience was for the students, saying this is the first time it’s ever been done in Salisbury — even in North Carolina.

Typically, these kinds of artifacts are locked up behind glass in a museum, he said.

The scroll has been treated to protect it from light and touch.

“I think it’s really cool. I’ve never seen anything like that,” said Emily Boggs, a senior at North Hills.

Classmate Elizabeth Farmer agreed, saying that she enjoyed being able to touch the scroll.

Although he had the students for nearly three hours, McDowell assured them he’d keep things interesting.

During one of McDowell’s talks, he discussed how it was artifacts like the Lodz Torah scroll that swayed his view of Christianity when he was a young agnostic.

McDowell said there were more than 4,000 regulations in place to ensure the accuracy of each copy of the Torah, such as counting characters, scoring the parchment and only copying from a certified scroll.

Scribes couldn’t copy from memory. They would state each word, then sing it, then state each character as they copied it down.

In addition, three scribes had to verify each scroll’s accuracy.

“Nobody else does that,” he said.

He added that certain formatting styles were used to emphasize different parts of the Torah, including the size of the letters, split columns, extended letters and extra spaces.

“You can open up the Bible and be pretty confident to say, ‘Thus saith the Lord,’ ” McDowell said.

McDowell said the Lodz Torah scroll contains a complete copy of the Torah. It came from a poor community on the German-Polish border and was initially copied in 1450 A.D. Because the community couldn’t afford to hire a scribe to make a new copy when it began to fade, they had it re-inked.

McDowell also showed the students the oldest copies ever discovered of the passages of Matthew 5:19 and I John 2:21 from the New Testament.

He said these ancient manuscripts are often found in ancient Egyptian burial masks or panels, which were made in a fashion similar to papier-mache.

He added that the more manuscripts that are found, the easier it is to recreate the original text. Older manuscripts tend to be more accurate, because they have been copied fewer times.

“In your lifetime, we’ll have the exact wording of the scripture,” he predicted.

McDowell’s first session focused on his personal journey of faith.

“I grew up thinking that Christians had two brains. One was lost and the other was out looking for it,” he said.

McDowell grew up on a farm in rural Michigan with an alcoholic father who beat his mother.

“All I wanted was for my father to stop hurting my mother,” he said.

As a pre-teen, he remembers being lonely and angry, and he allowed that anger to fester in his heart for a number of years.

He also said he was sexually abused by a man who worked on his family’s farm.

“I’ve walked through some pretty dark valleys in life,” he said, but added that there’s never been a time in his life when God has forsaken him.

But it wasn’t until he was in college that he began to see that.

After they challenged him to read the Bible and research its validity, he set out to prove them wrong.

However, during his research, he accepted the scriptures he was studying as intellectually true.

Not too much later, McDowell said, he prayed to accept Christ as his savior.

He said he knew that the change was genuine, when several months later, he met his father at a diner. McDowell planned to tell him that he hated him and how angry he was at him, but instead, the words, “I love you,” came out of his mouth.

Not too long after that, McDowell was in a serious car accident, and he was sent to his father’s house to recuperate.

McDowell said that for the first time that he could remember, his father was sober.

His father asked McDowell about his faith and made the decision to follow Christ as well.

McDowell’s father only lived about one year after his conversion, but his life was completely changed and ultimately, roughly 100 people also accepted Christ because of the change they saw in him.

“I’m so glad someone introduced me to Jesus Christ,” McDowell said, saying that he would have destroyed everything in his path without Christ and the power of forgiveness he experienced.

In his last session, McDowell spoke about relationships and the true meaning of love.

McDowell said that between the ages of 12 and 20, most young people start asking questions.

“I like to be there when they ask questions,” he said.

McDowell was visiting the school for their fundraising banquet Thursday evening, but he also spoke to middle and high schoolers Friday morning and at a luncheon for local pastors in the afternoon.

He has written 138 books and has spoken to more than 25 million people in 125 countries.