On its 150th birthday, Soldiers Memorial has history as unique and proud as its name 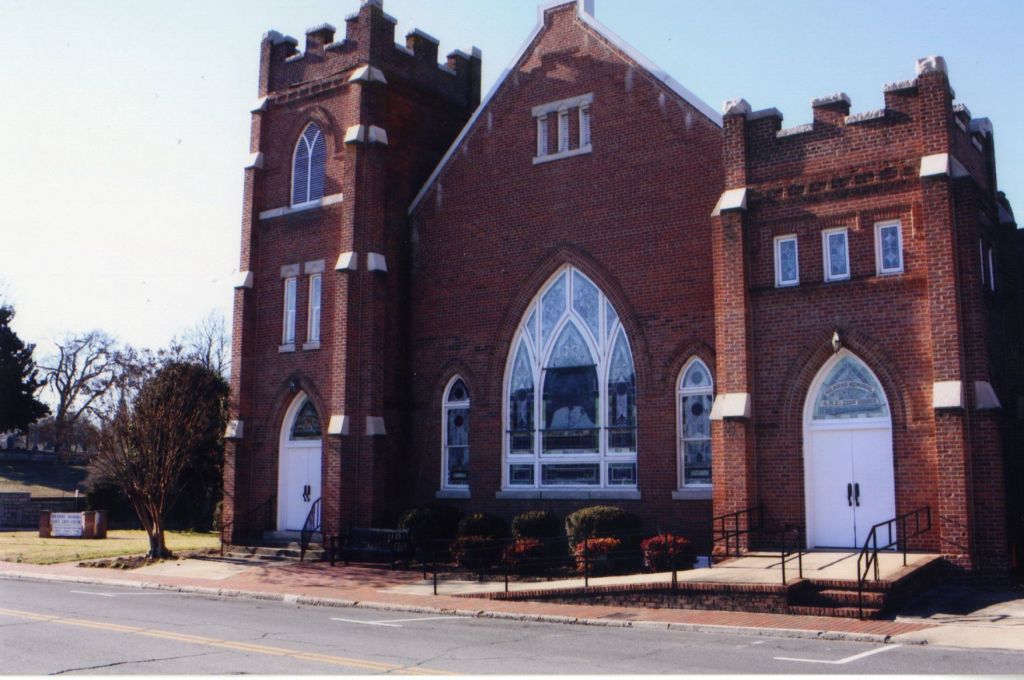 SALISBURY — It’s difficult talking about the history of Salisbury without mentioning the generations of families who built, attended and grew Soldiers Memorial AME Zion Church.
Soldiers Memorial, located at 306 N. Church St., is marking its 150th anniversary this year, moving toward an official celebration service May 18, when the keynote speaker will be Bishop George E. Battle Jr.
That will be followed by a Sesquicentennial Celebratory Banquet from 7-9 p.m. May 27 at the Livingstone College Events Center. Leaders will be discussing today’s church issues and the future’s needs as part of the evening, which will include food, music and thought-provoking discussion.
Soldiers Memorial is known for many things, from its century-old stained-glass windows and Victorian pews to the close connections throughout its history to Livingstone College.
But its members also were part of rebuilding the South after the Civil War. They served in two world wars and other conflicts across the seas. They survived the Depression and were among the people fighting for civil rights, education and better housing.
In addition, the church has a great legacy within the AME Zion Church with the pastors who have served, the ministers who have trained at Soldiers Memorial, the bishops grown and the mission work that has been accomplished.
The unique name — “Soldiers Memorial” — originated with the Rev. Dr. William H. Goler, one of the church’s early pastors and the second president of Livingstone College.
Goler said the “Soldiers Memorial Church” should honor the soldiers who gave their lives and service for the freedom of slaves.
But the church, organized in 1864, went by many other names in its earliest years. Those included the Zion Society, Zion Chapel, Salisbury Society, Salisbury Station and Mount Zion, before Soldiers Memorial became the enduring name.
ggg
In 1864, Barry Davis, George Willis and a Mr. Williams met in a boot shop to discuss organizing a Methodist church for the freedmen of Salisbury.
The new church was located in the Henderson Pines area off Long Street, not far from the old Power Curbers headquarters.
Davis, a stonecutter, was grandfather of Soldiers Memorial’s oldest church member today, Avis Fair Wilkins Monroe.
Another interesting connection: The first church structure was on the property of Henry H. Bingham, great-grandfather of another of Soldiers’ current members, Dr. Arletta Bingham Massey.
Other founders listed in church records were Emmanuel Jones, Simon Jefferson and William Boyden.
As attendance grew in 1865, the men moved the church from Henderson Pines to the Freedmen’s Bureau on East Council Street.
“It is thought,” church historian Raemi Evans said in a recent report to the congregation, “that a Rev. T.H. Henderson, an organizer of many churches in the area, helped to bring this society of worshippers, led by Mr. Barry Davis, to the AME Zion Church. In 1865, our church became a member of the N.C. Conference.”
In 1867, a storm destroyed the church building, but another structure took its place.
On April 4, 1873, Thomas and Ellen Henderson sold land at the corner of Church and Liberty streets to the Zion Society (Soldiers Memorial) for $350.
This is the spot where Soldiers Memorial still stands today. But misfortune hit the congregation again in 1886 when a windstorm destroyed the church, going by the name of Zion Chapel.
It was then Goler spoke of his idea for a Soldiers Memorial Church, and plans were hatched for the edifice seen today. It was completed in the early 1900s.

ggg
In 1882, the Rev. Dr. Joseph Charles Price joined Mount Zion Station, one of those other early names for Soldiers. He served as a trustee, and Price’s first office as president of Livingstone College was located at the church.
Price required the student body to attend the worship services every Sunday.
By 1885, Goler, who is credited with establishing Hood Theological Seminary and helping to develop the campus and curriculum of Livingstone, was appointed to Salisbury Station (Soldiers). He served as pastor for three years.
“His life and service to others were so impactful that even today, many institutions, such as Goler Hall and various churches throughout the country, are named after him,” Evans says.
Goler became Livingstone’s president at the death of Price.
The present-day sanctuary was completed thanks to the leadership, among others, of the Rev. Martin Van Buren Marable, presiding elder of Salisbury District, and the Rev. A.L. Houston.

ggg
The church’s stained-glass windows were purchased for $1,500 and installed in a period from 1904-1908.
Professor James E.K. Aggrey, his wife, Rose, and their daughter Abna were benefactors for one of the windows. James Aggrey, whose first pastoral assignment was at Soldiers in 1903, became well known later as an influential spokesman in the United States and abroad for education in Africa.
Rose Aggrey often stayed behind in Salisbury and worked out of Soldiers Memorial for public education improvements. Their daughters, Abna and Rosebud, became stalwarts in the church.
The inscription of “WCTU,” standing for Women’s Christian Temperance Union, can be seen on another of the stained-glass windows. It reveals that women of Soldiers Memorial were active in the community to prohibit the manufacture and selling of alcohol.
The Soldiers Memorial women apparently were influenced strongly by Mary Lynch, a professor at Livingstone, who in 1897 was elected state president of the Lucy Thurman WCTU.
Another stained-glass window was donated by the Dodge family, specifically Wiley, W.E. and G.W. Dodge.
The Victorian pews, still in use, were installed in 1910.

ggg
Contractor Floyd Wilkins, who served as trustee for Soldiers Memorial for about 30 years, led a dramatic change in the exterior of the church when he helped to remove its wooden spires and installed coping stones on the towers.
The church parsonage was built in 1922 and was given the name “Glenn Manse,” because the Glenn family had given the most in contributions.
In 1944, church members bought land for an Enrichment Center, which was built in 1949. Wilkins again helped, by converting an old stable into a kitchen, and he also directed the brick work.
Various campaigns over the past half century have paid for restorations and refurbishing of buildings and grounds.
But beyond the facilities, great people and traditions served at the heart of Soldiers Memorial.
Music has been a strong part of the church heritage, especially through the Senior, Children’s, Junior, Cathedral, Gospel and men’s choirs.
Three organizations — the deaconesses, the ushers and the Junior Church — also have been a building block of the Soldiers Memorial legacy.
The deaconesses, or “the Ladies in White,” provide the communion each first Sunday.
The ushers have a unique history. The late Lillian Perkins once wrote: “About the year 1910 or 1911, during the pastorate of the Rev. W.J. Walls, this church was one of the largest in the city, so we had many visitors.
“On Sunday morning with people coming in slamming doors and looking for seats, the pastor felt it necessary to appoint persons to hold the doors and do the other jobs, such as lower the windows and pass out the fans.”
The men served as ushers first, but when World War I came and some of the men were called to serve, Walls asked women to help.
Since then the doors have been attended Sundays by men and women.
Isabella Coleman was in charge of Junior Church for 40 years or more. The Junior Church members sat in the pews near her.
“There was absolutely no talking, no chewing gum, no eating and no walking for water or restroom use,” Evans says. “… Even the parents supported her rules for their children.”

ggg
Soldiers Memorial today has three Sunday School classes named for outstanding members of the church in the 1940s and 1950s. They include O.C. Hall, a French teacher who became principal at J.C. Price High; Lena B. Duncan, wife of Dr. Samuel Duncan, another Livingstone College president, and mother of Elizabeth Duncan Koontz; and Calvin Anderson, a lifelong member, trustee, usher, Sunday School superintendent and part of the Men’s Choir.
As for the connection to Livingstone College, “no other church can have our bragging rights,” Evans says.
“It is interesting to note that of 26 buildings on the campus, seven are named for members and former pastors of Soldiers Memorial.”
Those buildings include Price Memorial Building, Goler Hall, Trent Gymnasium, the Aggrey Student Union, the W.J. Walls Heritage Hall, the W.J. Walls Student Center and Harris Hall.
Professor Victorian Richardson, another Soldiers Memorial member, wrote the music for Livingstone’s alma mater.
Seven former pastors of Soldiers Memorial became AME Zion bishops: Cicero Harris, George Clement, Robert Bruce, William Walls, Herman Anderson, Alfred White and Joseph Johnson.
Dr. Grant Harrison Jr. serves as pastor today. The church is featured on the African American Heritage Trail for Salisbury-Rowan, and the congregation has fourth generation families still attending.
One of the more interesting stories from Soldiers Memorial’s past involves the “$1,000 Seat Rally” designed in 1910 to raise money for the Victorian pews.
Church members divided themselves into two competing groups: America and England. The two groups also were subdivided into states and companies.
The church still has a tally sheet of all the contributions made for the seat rally, which raised $1,011.18. In the end, 340 members were listed as contributors.
Evans loves telling about the seat rally, noting that every contribution, even if it were only 25 cents, was written down.
Today, Soldiers Memorial has about 125 members on the roll.