Savory treats, culinary tips blend together for a good time at Taste of Home 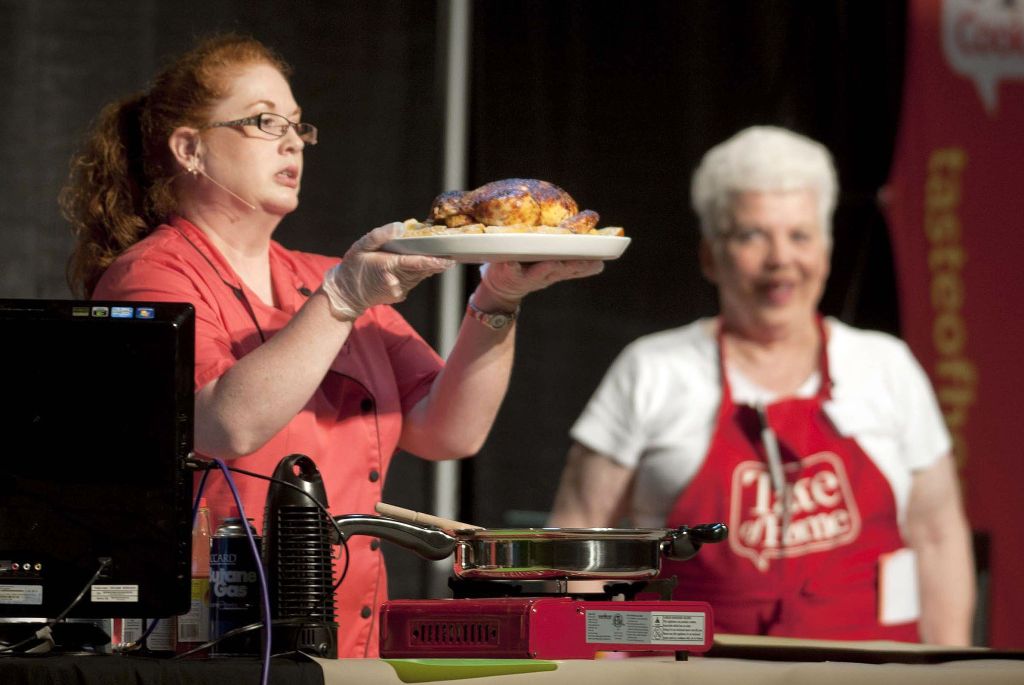 You could say the Taste of Home Cooking School has become an annual tradition. A crowd of some 600 people — sisters, friends, husbands and wives, mothers and daughters filled The Event Center on Thursday at Cornerstone Church for an evening of recipes, culinary tips and tricks, music, humor and more — all of which blended together for a good time.
Attendees began arriving as early as 4 p.m. VIP ticket holders received preferred seating, a Taste of Home cookbook and a meet-and-greet with Michelle Roberts, the evening’s culinary specialist from Taste of Home.
The doors opened an hour later for general admission ticket holders, who browsed a vendor lineup offering everything from skincare to gourmet coffee to kitchen gadgetry to jewelry and more.
The event was presented by the Salisbury Post, with local sponsorship from Walmart, The Event Center and Lowe’s.
Claiming front-row seats early were Kellie Martin, her sister, Laura Ingram, and their good friend, Clancy Fleming.
“We do it every year,” Martin said. “It’s an annual thing for us. We love it! We sit in the front row and stretch out and Elvis sings to us!”
That would be Michael Thomas, local mail carrier by day, emcee and “Melvis” by night. Thomas kept the tempo moving along by announcing information about the sponsors, as well as calling out winning names for door prizes.
The only catch was, each winner had to stand up and yell, “I love food!” But the audience gamely complied.
Roberts, who lives near Birmingham, Ala., is known for sprinkling humor throughout her presentations, and last night was no exception. She asked how many attendees were new to cooking school. Many in the audience raised their hands.
“Where y’all been?” she asked. The audience seemed fairly well split between new and veteran attendees.
David Diggs of Rockwell attended with wife Wendy and his sister, Angela Lippard. He loves to cook, he said, and cooks just about anything.
“Angela’s been coming a couple of times, and Wendy came last year,” Diggs said. “I was off so I figured I’d stop by.”
Kimberly Lentz and her mother, Diane Everhart, both of Spencer and both coffee-lovers were — where else? — sampling free coffee before the show began. Romania Cline of China Grove held court on the front row. Cline, 92, doesn’t cook much anymore, she said, but loved the entertainment that the show offered.
The evening’s centerpiece, of course, was the recipe demonstrations. Roberts prepared nearly a dozen dishes. Attendees received well-filled goodie bags, which included the Taste of Home Cooking School magazine with all of Roberts’ recipes. Roberts is one of nine culinary specialists traveling the country, inspiring more than 300,000 consumers at 300 events annually.
Roberts started the evening by preparing Bacon Potato Waffles as an “Mmmmmmmm” went through the crowd.
“They are amazing,” Roberts noted.
These waffles are a savory treat, she said, using mashed potatoes, and can be garnished with sour cream and chives.
“It’s a lot like a loaded baked potato,” she said.
Next, she made an Italian Brunch Torte using Eggland’s Best Eggs, one of the school’s sponsors. Other ingredients included crescent rolls, spinach, mushrooms, cheese, ham, salami and roasted red peppers.
Johnsonville sausage was the star of Baked Cannelloni. Roberts said that she finds it easier to split the shells before she fills them. Also, she said, undercook pasta by about a minute. It will finish cooking in the oven.
Other recipes included Plum-Glazed Roasted Chicken, Maple Nut Coffee Cake and Mushroom Meatball Parmigiana Sandwiches.
Roberts made the point that a lot of people don’t like mushrooms because of the texture. If you chop them up and cook them, they take on the consistency of ground beef.
“You can use mushrooms to extend your meat, cut back on meat, add veggies to your food or save calories,” she said. “If they don’t know they’re in there, they’ll never know.”
Roberts said that she and her boyfriend were eating mushroom tacos one night when he asked, “Well, where are the mushrooms?”
“I do want you to give it a try,” she said.
Roberts had six volunteers serving as her culinary assistants. They were Jane Cooper, Robin Hendrick, Jennifer Osian, Cindi Graham and Christine Smith. Amanda Clark came from Greensboro because her grandparents, J.P. and Sally Helms, are from Salisbury.
The women kept busy ferrying food from the refrigerator and oven and washing dishes behind stage.
“This is a fun thing,” Cooper said. “I taught food service at North Rowan for 10 years. Christine and I are neighbors.”
The women were also responsible for placing ingredients on numbered trays — each representing a different recipe — and giving them to Roberts. It was quite an organized procedure.
“Michelle is the one who got us organized,” Cooper said, returning to those dirty dishes.
For more information about the Taste of Home Cooking Schools, visit www.tasteofhome.com.