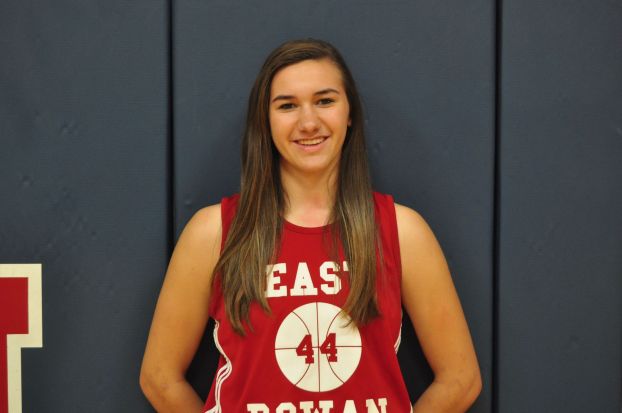 LANDIS — East Rowan’s freshman pitcher Bree Medlin looked like she’d boxed 15 rounds, but she was determined to finish what she started in the circle.
South Rowan sent eight batters to the plate in the seventh, scored three times and brought the tying run to the plate, but Medlin hung on — and East hung on 7-4 for its third straight SPC victory.
“That last inning was long,” said Medlin. “I was really tired and really hot, but we got through it.”
It was a big win for the Mustangs (6-5, 5-5), who are fighting for a playoff berth.
South (5-7, 4-6) lost a home game it probably couldn’t afford to lose as far as its own playoff hopes.
“East hit the ball better than we did and East deserved to win the game,” South coach Hunter Fuller said. “And you have to give East credit for making some good defensive plays. Every time we tried to be aggressive, they made a play.”
Medlin isn’t big for a pitcher, but she struck out eight and was dominant the first six innings. Two of her three walks came in the seventh, and three of SR’s six hits didn’t leave the infield.
East had 10 hits against South pitcher Samantha Kennerly. Shelby Benge had three, including a double. Katie Kepley had two.
The biggest plus for East’s hitters was they never struck out. They put balls in play up and down the lineup, and while East isn’t quick, the Mustangs ran the bases well. They scored three runs on groundouts.
“We lost six starters, so there are a lot of new faces on the field for us,” East coach Mike Waddell said. “Usually we have a chance to learn in scrimmages and non-conference games, but this year we had conference games in February, so we’ve had to learn in games that count. We made some mistakes today, but we fortunately had a big enough lead that it didn’t come back to bite us.”
Medlin got the first run home in the third, and East made it 4-0 in the fourth on a run-scoring single by soph Taylor Merritt and a two-run single to right-center by Schrade Daniel, another soph
Caitlin Waters produced a run-scoring single to put South on the board in the fourth, but Daniel’s third RBI came in the sixth and pushed East’s lead to 5-1.
After Kaleigh Troutman and Benge knocked in runs, East led 7-1 and appeared in control, but the excitement was just starting.
Beth Ann Martin’s infield hit began the SR seventh, walks to Kennerly and Sarah Ford followed, and South had the bases loaded.
Rileigh Ward drove in two with a well-hit single, and it was 7-3. Medlin took a deep breath and got a strikeout, but East didn’t get an out on Kacie Stamey’s groundball to short, and another run scored.
But with two on, Medlin won a 10-pitch battle with South senior Caroline Hubbard for out two and ended the game with a strikeout.
“It was a great team win,” Daniel said. “We kept our heads up in the seventh, and we never lost faith in Bree.”