Inaugural Tweed Ride puts a little English on the streets 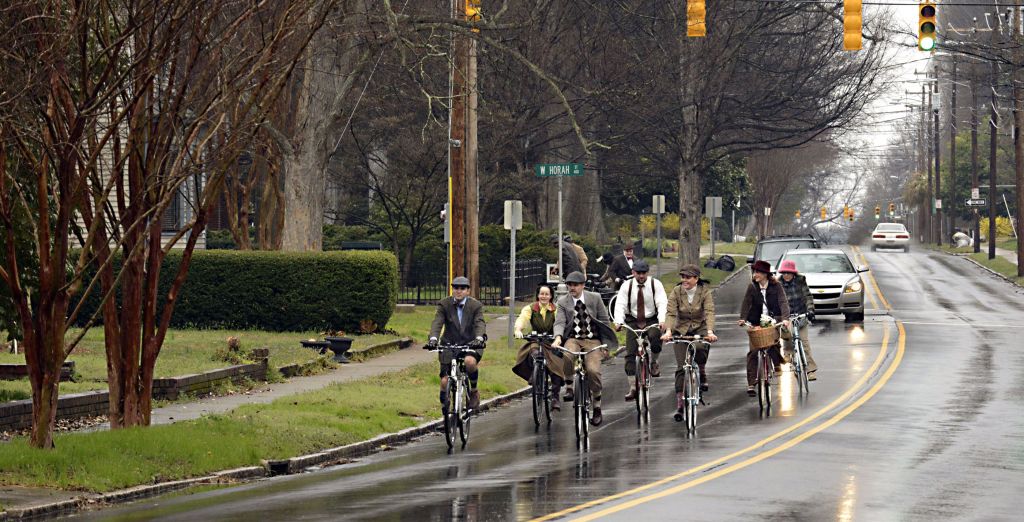 SALISBURY — Perhaps it wasn’t the best day to go cycling around Salisbury, but it certainly fit the theme.

At 1 o’clock, a small group of men and women on bicycles gathered outside the Salisbury Depot.

The ladies wore similar clothing, including tweed skirts or slacks, and hats to keep the rain off.

They braved the damp rain for Salisbury’s first Tweed Ride — a bicycling jaunt modeled after an event in England, now becoming a fad around the U.S.

Cyclists in London’s annual Tweed Run dress in English cycling attire — tweed “plus four” suits are traditional for men, being a type of sportswear popular from the late 1800s through the 1920s.

Numerous cycling clubs in the U.S. and the United Kingdom host similar costumed rides, but this is the first time one has come to Salisbury.

Sunday’s ride was organized by Eric Phillips, owner of Skinny Wheels Bike Shop, who said he wanted to bring a fun event to the streets of downtown.

“It’s more about trying to bring more of a bicycle culture to Salisbury. Something fun that more people can get involved in, to get people more engaged,” Phillips said.

That includes bike rides that are “not necessarily athletic events,” Phillips said, “but still getting out and being active.”

Other ideas include “Bike and Bowl,” where participants ride as a group to go bowling, excursions to local Movies in the Park at City Park and a local version of the Critical Mass bike rides.

More than 30 riders had originally planned to take part in the event the previous Sunday, March 16.

Phillips said he called off that ride due to rain, but said he was afraid to lose participants if he postponed it again.

“It was kind of a tough call,” Phillips said.

After a discussion on Facebook on Sunday morning, Phillips and others decided to go ahead with a shortened ride in the rain.

The cyclist’s route took them from the train station down South Fulton Street, around Chestnut Hill Cemetery, then back through town to the Across the Pond Bed and Breakfast at 324 N. Fulton St.

Owners Mary and Andrew Walker met them at the door as they pushed their cycles up the front walk.

“Look at the bikes!” Andrew Walker said. “Man, you guys are hardy.”

“If that means ‘cold,’ you’re right!” one rider replied.

“Tea’s being poured,” Mary Walker said as they came inside, “a nice spot of tea.”

Guests took time to dry off, and toured of the renovated Stokes-Snider house which opened as a bed and breakfast in January.

Walker, a native of Leeds in the north of England, said the costumes were “very authentic.”

Melinda Phillips, Eric’s wife, said Salisbury was a good place for this event, with wide downtown streets and plenty of sights to see.

Alan Berkeley and Marie Boucher, of Charlotte, said it was nice to visit the city and see historic buildings.

“I was surprised by how quiet it was,” Berkeley said.

The tweeds that the riders wore were quite handy on a cold and drizzly afternoon.

“It’s designed for this,” Boucher said, talking of the costumes she’d assembled for the two of them. Despite riding several miles through the rain, she said they’d stayed pretty dry.

Mary Walker said the weather was perfect. “You don’t let the rain stop you in Britain, or you’d never do anything,” she said.

The tweed ride phenomenon can be found around North Carolina, Phillips said.

Berkeley and Boucher said they’re planning to go. “We couldn’t go to all this effort and just do one,” Boucher said, gesturing to their costumes.

Phillips said there will likely be another local tweed ride, hopefully on a sunnier day.

In the meantime, cyclists mounted up and headed toward the last stop of the afternoon: Benchwarmer’s on East Fisher Street.