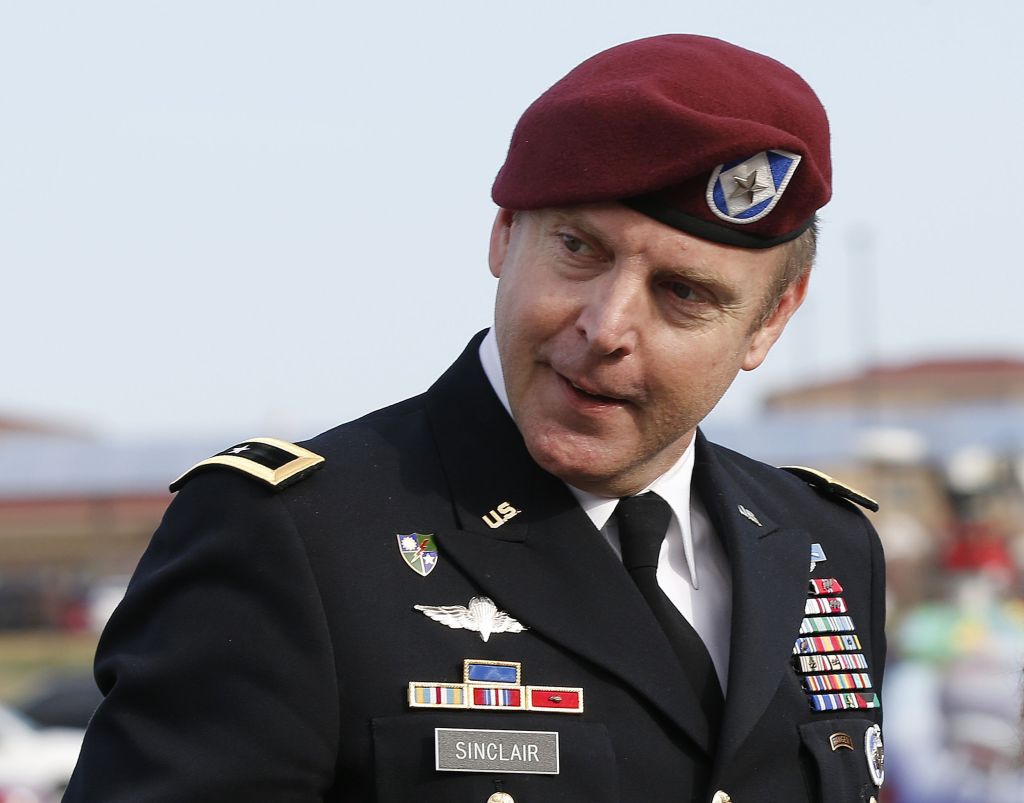 FORT BRAGG (AP) — The Army general at the center of a sexual misconduct case that put the military justice system itself on trial was spared prison Thursday and sentenced to a reprimand and a $20,000 fine — a punishment legal experts, a women’s group and members of Congress condemned as shockingly light.
Brig. Gen. Jeffrey A. Sinclair, 51, immediately announced his retirement, capping a humiliating fall for the battle-tested commander once regarded as a rising star in the Army. A disciplinary board could still bust him in rank and severely reduce his pension.
“The system worked. I’ve always been proud of my Army,” Sinclair said outside court after reacting to his sentence with a smile and an embrace for his lawyers. “All I want to do now is go north and hug my kids and my wife.”
The former deputy commander of the storied 82nd Airborne Division was originally brought up on sexual assault charges punishable by life in prison. He was believed to be the highest-ranking U.S. military officer ever court-martialed on such charges.
But earlier this week, prosecutors dropped those charges in a deal in which Sinclair pleaded guilty to adultery with one woman and conducting inappropriate relationships with two others by asking them for nude pictures and exchanging sexually explicit email. Adultery is a crime in the military.
The case unfolded with the Pentagon under heavy pressure to confront what it has called an epidemic of rape and other sexual misconduct in the military.
Rep. Jackie Speier, D-Calif., called the sentence “laughable.”
“Even when the world is watching, the military has demonstrated their incompetence at meting out justice,” Speier said in a statement. “This is another sordid example of how truly broken the military justice system is. This sentence is a mockery of military justice, a slap on the wrist nowhere close to being proportional to Sinclair’s offenses.”
While the charges against Sinclair carried a maximum of more than 20 years in prison, the plea bargain worked out by the defense and military prosecutors called for no more than 18 months.
The judge, Col. James Pohl, did not explain how he arrived at the much lighter sentence.
Prosecutors had no immediate comment.
Under the sexual assault charges, Sinclair was accused of twice forcing a female captain to perform oral sex and threatening to kill her if she told anyone about their three-year affair in Iraq and Afghanistan.
But the case started to crumble as questions arose about her credibility and whether military officials improperly pressed ahead with a trial because of political considerations — namely, a desire to show the Army’s resolve to combat sexual misconduct.
Retired Rear Adm. Jamie Barnett, a Washington lawyer who helped represent the female captain, said the woman was disappointed with the sentence. Barnett called it a “slap on the wrist.”
“A sentence doesn’t take away any of the pain and anguish that she has endured,” Barnett said.
The Associated Press generally does not identify those who say they were sexually assaulted.
Experts in military law agreed the sentence was lenient.
“I can’t believe it,” said retired Lt. Col. Gary D. Solis, a former military judge who now teaches law at West Point and Georgetown University. Solis said Sinclair “is an individual who should not be a general officer. He should have gone to jail and been dismissed from the Army.”
Sinclair will now go before Fort Bragg commander Maj. Gen. Clarence K.K. Chinn, who approved Sinclair’s plea bargain, and will get either an oral or written reprimand.
If Sinclair had not announced his retirement, an Army disciplinary board would have almost certainly forced him into it.
Now the board will decide whether to demote him, which could cost him hundreds of thousands of dollars in benefits during his retirement. Sinclair made about $145,000 a year in base pay.
Prosecutors had argued that the judge should throw Sinclair out of the Army and strip him of his benefits, while the defense said that would harm his wife and their two sons the most. Prosecutors did not ask the judge to send Sinclair to jail.
Retired Maj. Gen. Walt Huffman, a Texas Tech University law professor who served as the Army’s top lawyer, said he would have predicted a year to 18 months behind bars.
“But his career is being terminated. That much is for sure. He’s being fired for all practical purposes,” Huffman said.
Greg Jacob of the Service Women’s Action Network said the case demonstrates the need for legislation that would strip commanders of the authority to prosecute cases and give that power to seasoned military lawyers. The bill, backed by Sen. Kirsten Gillibrand, D-N.Y., was defeated in the Senate earlier this month.
Gillibrand is expected to renew her effort to change military law this spring.
“This case has illustrated a military justice system in dire need of independence from the chain of command,” she said in a statement.
A spokeswoman for Sen. Claire McCaskill, D-Mo., who fought the bill, said the case reinforced her side of the argument.
“One of its lessons highlights what we already know — that commanders are often more aggressive than prosecutors in pursuing prosecutions and vetting these cases,” Sarah Feldman said.