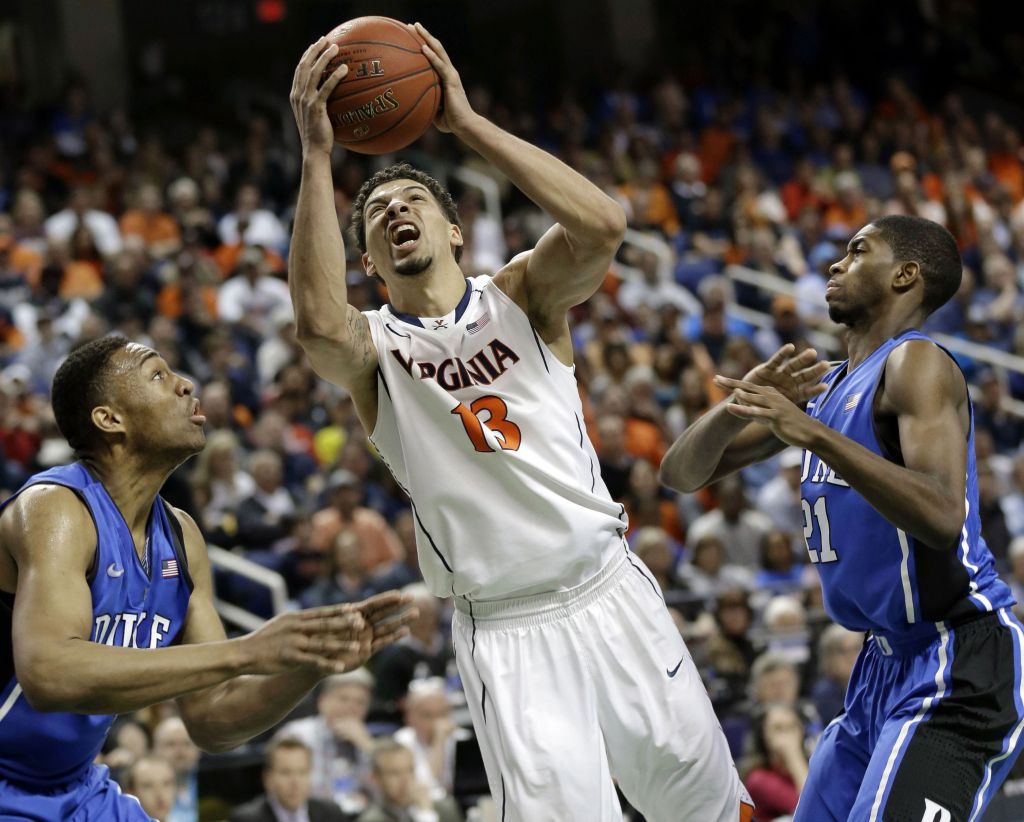 GREENSBORO, N.C. (AP) — Coach Tony Bennett climbed up to the rim, gave the net a final snip and twirled and raised it toward all those Virginia fans.
Savor it, Cavaliers. You’ve waited nearly 40 years for a moment like this.
Virginia claimed its first Atlantic Coast Conference tournament title since 1976 on Sunday by beating No. 7 Duke 72-63 in the final.
Malcolm Brogdon scored 23 points, and tournament MVP Joe Harris added 15, including a backbreaking 3-pointer with just under 2 minutes remaining for the top-seeded Cavaliers (28-6).
Playing in front of a raucous — and mostly orange-clad — Greensboro Coliseum crowd, they shot 45 percent from the field, pestered the Blue Devils into 38 percent shooting and used a late 12-3 run to pull away and claim the second ACC tournament title in school history.
“We were kind of joking around when we came in — we were asking, ‘Where are all of the Duke fans?”’ Harris said. “All we could see was orange when we were driving over here. … The city of Charlottesville definitely deserves an ACC tournament title.”
Jabari Parker scored 23 points on 9-of-24 shooting for the third-seeded Blue Devils (26-8), who were making their 31st appearance in the championship game but were denied their ACC-record 20th title.
Anthony Gill added 12 points and was 10 of 17 from the free throw line for Virginia. Duke was just 7 of 11 from the line.
“We had a hard time finishing and getting to the foul line when we didn’t,” Duke coach Mike Krzyzewski said.
The Cavaliers came to Greensboro after winning their first outright ACC regular season title since 1981, and were trying to do something not even Ralph Sampson could do.
It had been a long time — 38 years — since Wally Walker led Virginia to its only previous ACC tournament title.
Now that trophy won’t be alone anymore.
“Wally Walker said we want some company with that team in ‘76,” Bennett said.
With its “pack line” defense clicking and holding Duke 13 points below its scoring average, Virginia was in control for most of the game, yet could never get any separation until the final 21/2 minutes.
“We kept talking about it — don’t get sped up, make them guard you, and make them earn on the other end,” Bennett said. “We had to earn this against that kind of team and that kind of program.”
Akil Mitchell hit a shot to make it 61-57, then stripped Parker at the other end to set up Harris’ wide-open 3 in transition that extended the lead to seven points and had Duke’s Rodney Hood fuming.
Harris gave Duke a final chance when he rushed up a shot and Quinn Cook countered with a 3 with 11/2 minutes left to pull the Blue Devils within four.
Brogdon then drove through the Duke defense for a momentum-shifting layup that made it 66-60 with just over a minute to play and caused Duke assistant Jeff Capel to tellingly slump back on the bench in exasperation.
“I think we kind of rushed. We were just so anxious to get on the offensive end once we tried to get down and get their momentum on (Duke’s) side,” Parker said.
Cook missed a short jumper before Brogdon hit six of eight free throws in the final minute to help the Cavaliers pull away.
Hood finished with 13 points on 4-of-12 shooting and Amile Jefferson added 11 for Duke.
This was a one-possession game throughout the second half until Mitchell’s tip-in with 5:10 left pushed Virginia’s lead to 57-53.
Parker missed three shots on Duke’s next possession, then picked up his fourth foul with 3:53 left and Gill hit two free throws to put the Cavaliers up by six.
Virginia was one of the few opponents which found a way to slow Parker, holding him to eight points on 3-of-11 shooting in the regular season meeting — a four-point Duke win that came down to the final seconds.
With Mitchell keying the defensive effort on him, Parker was just 2 of 10 in the first half.
“He’s special. He’s strong, quick, athletic, can shoot the ball and put it on the floor,” Mitchell said. “I just wanted to make sure I stayed down, kept my balance and just tried to stay in front.”
Parker got hot midway through the second half and single-handedly kept Duke in the game, reeling off seven straight points for his team in a 90-second span.
He went coast-to-coast and threw down a one-handed dunk on London Perrantes, hit a 3-pointer from the wing to briefly give Duke a one-point lead and added a jumper off a spin move with 81/2 minutes remaining.
Mitchell finished with 15 rebounds for Virginia, which led 28-25 at the end of a physical, intense first half notable for its low shooting percentages — and a technical foul on Krzyzewski that the Hall of Fame coach called “ridiculous” and “shameful.”
Official Jamie Luckie hit Coach K with a T with 2:07 left in the half when Krzyzewski, with his back to the court, tossed his dry-erase marker toward his bench while coming out of a timeout.
There were plenty of reasons for Duke to be frustrated, yet the Blue Devils managed to keep themselves in the game despite a rough first half from its two best players: Parker and Hood were a combined 4 of 18 from the field.
Parker hit a point-blank shot while falling down with just under 16 minutes left to put Duke up 34-33 — its first lead since the opening minute.
Brogdon snatched the lead right back with a jumper on Virginia’s next trip down the court, and it stayed tight the rest of the way until the Cavaliers’ late surge.
———
Follow Joedy McCreary on Twitter at http://twitter.com/joedyap