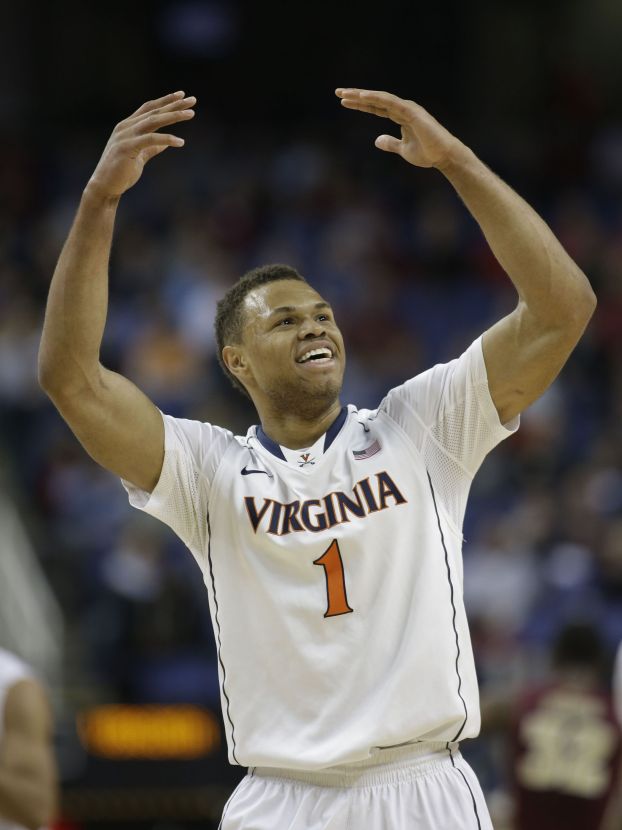 GREENSBORO — It’s been a season of firsts for No. 6 Virginia. The Cavaliers are savoring their latest one by sticking around the Atlantic Coast Conference tournament a little while longer than usual.
Virginia advanced to the ACC semifinals for the first time since 1995 by pulling away to beat Florida State 64-51 in a quarterfinal Friday.
Joe Harris matched a season high with 20 points and Anthony Gill added 16 for the top-seeded Cavaliers (26-6).
They shot 48 percent, forced 15 turnovers and earned their third double-digit victory over the Seminoles this season while winning their 14th in 15 games.
“We really just wanted to go out there and prove to everybody that we deserve to be here, we deserve the No. 1 seed,” Gill said.
Okaro White scored 17 points and Aaron Thomas added 13 for the ninth-seeded Seminoles (19-13).
They shot 43 percent against one of the nation’s best defenses but couldn’t keep the Cavaliers off the boards when it counted most, and were denied their third victory over a top-seeded team since 2009.
A victory would have gone a long way toward propelling them back into the NCAA tournament. Instead, the Seminoles can only sweat it out until selection Sunday.
“Our record speaks for us to be on the bubble, but I think we’re a great team,” White said. “We had a tough time throughout the course of the season, but I think we’ve shown everyone we’re a team that should be out there. I think we’re a team that’s up to the level of a lot of the teams that are going to be in the NCAA tournament, but it’s hard.”
Virginia established a 31-25 rebounding advantage — 21-13 in the second half — and finished with 17 second-chance points.
“We talk about outlasting people all the time,” freshman London Perrantes said. “We know that nobody’s going to want to guard us 35 seconds every time down the court, so we know that if we keep running our offense, they’re going to get frustrated and we’re going to get good shots.”
White pulled Florida State to 61-49 with his jumper through contact with 3:25 left. But he missed the free throw and the Seminoles didn’t hit another field goal the rest of the way.
Virginia will face fifth-seeded Pittsburgh, which beat No. 15 North Carolina 80-75, on Saturday in the first semifinal.
That’s unfamiliar territory for a Cavaliers program that hadn’t reached the semifinals in nearly two decades — the longest drought in the conference.
In matching a league record with 16 conference victories, Virginia earned the No. 1 seed in the tournament for just the second time and first since 1981.
The Cavaliers’ only tournament title came in 1976 and until Friday they had won only four ACC tournament games since that last semifinal appearance — and none since 2010.
“We’ve done a lot of things that we haven’t done for years,” Perrantes said. “So for this to happen for us now is definitely a relieving experience.”
They led for all but about eight minutes of this one and were in control throughout — even if it took a while for the scoreboard to finally reflect that.
“It’s very hard to come back on a team like Virginia when they’re coming down and using 30 seconds of the shot clock,” White said. “You can’t get down on them.”
Harris, who matched the season high of 20 points against Hampton on Nov. 26, was 7 of 12 and hit at least half of his shots for the first time since a win against Maryland on Feb. 10.
“He has a good feel when to let it come and when to be assertive,” ACC coach of the year Tony Bennett said. “He senses. He doesn’t get it right all of the time (but) he senses when something is required of him.”
Virginia pushed its lead into double figures for the first time on Gill’s free throw with 13:57 left that made it 43-33.
Harris bounced in a 3-pointer four possessions later to make it 48-37, Darion Atkins followed that with a jumper and then hit two free throws to make it a 15-point game with 9:51 remaining.
Ian Miller finished with 10 points for the Seminoles.

GREENSBORO — The foundation of Pittsburgh’s NCAA tournament resume has been its lack of bad losses. The Panthers weren’t about... read more