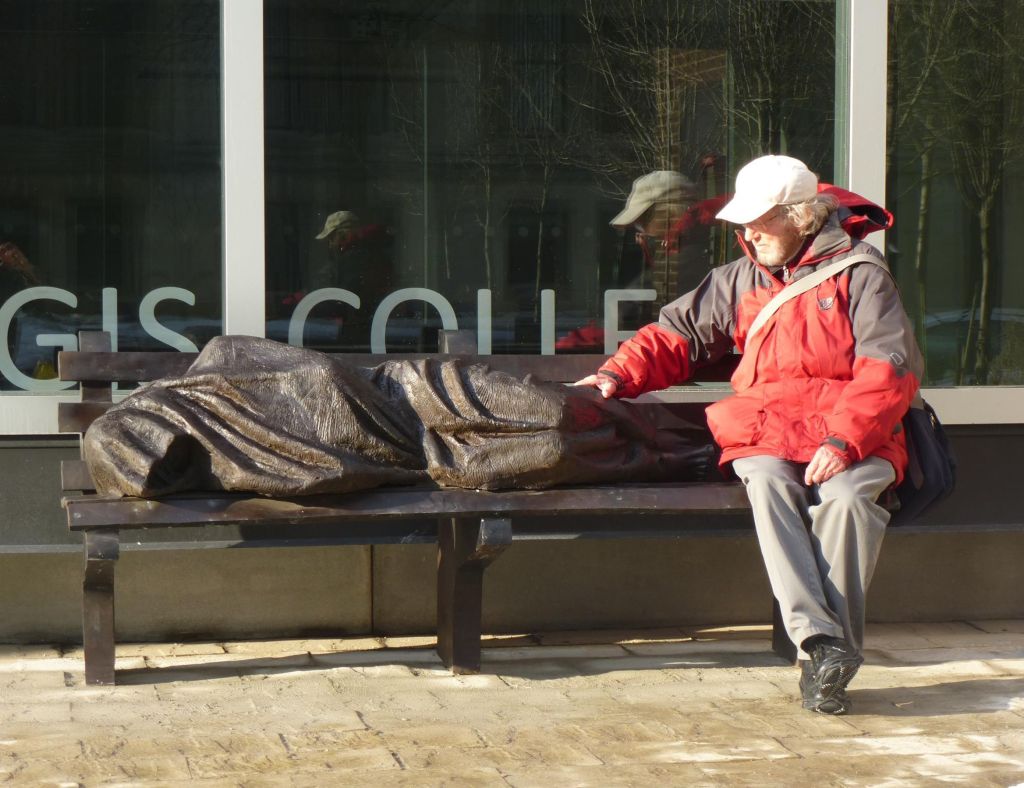 DAVIDSON (RNS) — In a small college town 20 miles north of Charlotte, “Homeless Jesus” is provoking more conversation than a month of Sunday sermons.
The life-size sculpture depicting a figure asleep under a blanket on a park bench lies outside St. Alban’s Episcopal Church. The nail-scarred feet peeking out from under the blanket are the only indication that Canadian sculptor Timothy Schmalz is making a religious statement about Jesus.
The hollow, bronze piece bolted to the park bench is a $22,000 gift from a church member intended to support public art.
That’s a small price to pay to get people thinking about what it means to be a Christian—and what it means for “Homeless Jesus” to take up residence in a community of 270 townhomes and single-family homes, said the Rev. David Buck, the rector of St. Alban’s.
“You love it, you hate it, it makes you think,” said Buck, who has been happily overwhelmed by the thousands of responses he’s personally received or read online. “It’s gone viral!”
St. Alban’s neighbor John Chesser, who walked past “Homeless Jesus” on the way to pick up his mail one sunny Sunday morning, had another response: “It’s a little creepy.”
It makes sense that “Homeless Jesus,” a copy of Schmalz’s original work, found a home outside St. Alban’s. Buck says the congregation of 800 members fills a “liberal, high-church niche,” is gay-friendly and embraces the arts and sciences. The church draws a number of faculty, staff and students from Davidson College a mile or so down the road.
Buck, 64, led a Southern Baptist church outside Charlotte until the Southern Baptist Convention grew too conservative for his liking. He switched denominations and says he never dreamed he’d have the chance to serve a church like St. Alban’s.
The saga of “Homeless Jesus” has stirred Buck’s juices more than he could ever have hoped.
With the church in the middle of an upscale community, the congregation agreed that it’s the perfect place to display a piece of public art.
“Homeless Jesus” was bolted down in February, beside a bronze plaque with the familiar words from Matthew 25:40— “Truly, I say to you, as you did it to one of the least of these my brothers, you did it to me.”
The news stories started coming almost immediately: The Charlotte Observer, The Christian Post, The Huffington Post.
Public reaction quickly followed on both sides.
Buck said someone attached a note to the sculpture saying this isn’t the way to remember Jesus. A reader posted a somewhat sarcastic response to The Christian Post story: “The Episcopal Church, huh? Shocking.”
Chesser, the neighbor walking to get his mail, calls the piece “dark” and “macabre” — so dark and macabre, it never occurred to him to think about whether it belongs in a community like his. Neighbor Jerry Dawson wrote a letter to the editor at the online davidsonnews.net saying it doesn’t belong.
“My complaint is not about the art-worthiness or the meaning behind the sculpture. It is about people driving into our beautiful, reasonably upscale neighborhood and seeing an ugly homeless person sleeping on a park bench.”
Bob Cameron, president of the St. Alban’s Square Neighborhood Association, said he invited Dawson to air his concerns at a board meeting. Meanwhile, the association has not taken a position on “Homeless Jesus,” and neither has he.
Supporters have spoken up as well, in and out of St. Alban’s.
“It makes us all more aware of homelessness, that there are others who are not as fortunate as we are,” said church member Alice Mietz, who lives about 20 yards from the piece.
As Buck was seated on a bench outside the church, making the case for the sculpture, Mike Schaefer of Roanoke, Va., stopped his car in front of “Homeless Jesus” and jumped out to snap a picture before heading home.
“As Christians, we need to be more aware of the homeless among us,” he said.
“Attaboy!” Buck exclaimed in response. “Quote him!”
Such is the brouhaha that the Rev. John Kuykendall, who lives a mile or so from church, drove over one day to see what all the fuss is about.
The retired president of Davidson College and a Presbyterian preacher, Kuykendall believes St. Alban’s is prophetic for welcoming Jesus in the guise of a homeless man asleep on a park bench. There are more references in the gospels to Jesus’ relationship with the poor than anything else, Kuykendall says. “Where it says the Son of Man has nowhere to lay his head, that means he’s homeless.”
Before heading home for Sunday lunch, Buck had one more point to make: There’s a good reason why the artist left room for one person on the bench next to “Homeless Jesus.” Perhaps people will take a seat beside Jesus and pray.

Beware the lovely greenery: Invasive plants are coming your…