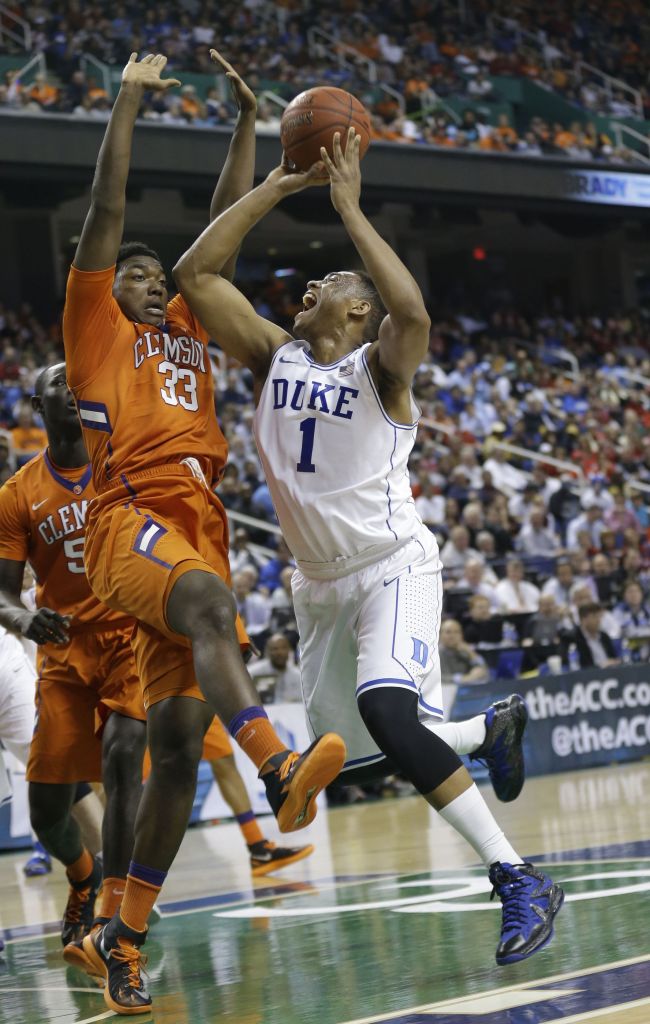 GREENSBORO — Rod Hall stormed down the court, determined to send No. 7 Duke to another one-and-done at the ACC tournament.
And then Tyler Thornton reached out and came up with the only defensive stop the Blue Devils needed.
Duke held on to beat Clemson 63-62 Friday night in the ACC quarterfinals after Rodney Hood hit two free throws with 3.8 seconds left and Thornton came up with his timely stop — the only one the Blue Devils managed in the last 5 minutes.
“We would’ve lost that game a month ago, I think,” Hood said.
ACC rookie of the year Jabari Parker scored 18 points, and Hood had 17 for the third-seeded Blue Devils (25-7).
They blew a 13-point lead with 12 minutes left before regrouping just in time to avoid joining No. 15 North Carolina and No. 11 Syracuse as ACC quarterfinal losers. Duke will play seventh-seeded North Carolina State in a semifinal Saturday.
Hall scored 13 points to lead sixth-seeded Clemson (20-12), and his runner in the lane with 7.4 seconds left capped a late 15-5 run and gave the Tigers their only lead of the second half at 62-61.
After Hood’s free throws, Hall made it deep into the lane before Thornton stripped him a moment before the buzzer sounded.
“He was coming so fast, and I was just trying not to hit him on the body,” Thornton said. “And then I saw an opportunity to swipe at the ball when he went through, and I hit it.”
Clemson coach Brad Brownell and the rest of the Tigers’ staff erupted when no foul was called. Hall said he was hit “on both sides” by two defenders.
“I mean, we wasn’t getting calls throughout the game,” Hall said. “So I didn’t know how it was going to go out. Just trying to make a play.”
Rasheed Sulaimon added 14 points and Amile Jefferson had 13 rebounds for the Blue Devils, who narrowly avoided their third straight postseason loss at the Greensboro Coliseum.
They lost their first ACC tournament game here last year to Maryland and before that were memorably upset by 15th-seeded Lehigh in their NCAA tournament opener in 2012.
All-ACC guard K.J. McDaniels scored 12 points and Jordan Roper added 11 for Clemson, which trailed by nine points with less than 6 minutes remaining before its late run.
“In the beginning of the second half, we kind of got a lot of stuff at the rim, and I think we shied away from that,” Parker said. “We didn’t really get to the line like we wanted to, and we allowed them to take advantage of our bad shots, and they would capitalize on offense when they got on the breaks because they took advantage of the bad shots we took.”
Damarcus Harrison and Hall hit back-to-back 3s to start the burst in which the Tigers scored on seven straight possessions.
McDaniels hit a free throw with 47.7 seconds left to pull Clemson to 61-60. When Sulaimon missed a floater with about 15 seconds left, Landry Nnoko pulled down the rebound and kicked it out to Hall — who hurried downcourt and hit his runner in the lane to briefly put the Tigers ahead.
Hood then flew right back the other way, drew contact from McDaniels while attacking the basket and hit both ends of a one-and-one for the game’s final points.
“I just got eye contact with him when he got the ball, and I said, ‘Go,’” coach Mike Krzyzewski said. “I believe in Rodney. You sink or swim with him, and we’re still swimming. So thank goodness.”
Nnoko finished with 10 points for Clemson, which won the only regular-season meeting — a 72-59 romp in January that dropped Duke to 1-2 in the league and caused a significant amount of soul-searching among the Blue Devils.
The Tigers shot 67 percent in the second half of this one to nearly knock them off again.
“I couldn’t be prouder of my players to show the resiliency we did throughout the game, especially the second half when it looked like we were dead again,” Brownell said. “Our guys just had a lot of fight. They just kept coming.”