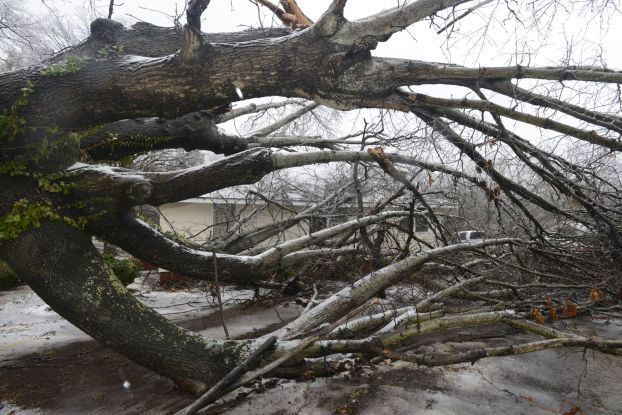 Icy weather wreaked havoc in Rowan County on Friday, causing a large number of wrecks, power outages, downed trees and power lines beginning early, with the majority of incidents tapering off by the afternoon.
The ice created hazardous travel conditions Friday morning, as one Rowan-Salisbury School System bus driver discovered when he hit an icy patch at the intersection of Sherills Ford and Majolica roads just after 6 a.m.
The bus slid down an embankment and struck a natural gas substation. The gas main ruptured, but was later contained by Piedmont Natural Gas crews, said Chief of Emergency Services Frank Thomason.
The bus, bound for West Rowan High School, had three students aboard. No one was hurt, Thomason said, and they safely evacuated the bus.
A crew with the Rowan-Salisbury School System worked for nearly an hour to free the bus from the ditch and place it back onto the roadway.
There was a major concern among emergency personnel of gas leaking from the substation, Thomason said.
That could have caused some other issues, including an explosion or fire. Fire personnel were waiting close by in case there was any other trouble.
Department of Transportation road crews spent much of the day responding to downed trees, some that fell onto power lines and others on houses. A large tree fell at 1829 Statesville Blvd., where Michael Chand rents the property.
Chand told the Post the tree fell around 6 a.m., but he initially thought the loud boom he heard was thunder or a traffic accident. He said his dogs alerted to the noise first. The large tree was ripped from the ground, leaving its roots exposed.
The tree did not cause any significant damage to his home — only a few tree limbs fell onto the house — but it did knock down his utility line.
Ice weighed down a cluster of pine trees at the home of Haywood Cope at 1448 Statesville Blvd., sending the trees into the roadway, partially onto power lines. Road crews had to block the intersection at East Colonial Drive and on the other end where traffic was able to travel back onto Statesville Boulevard at Milford Drive.
Trees were uprooted along Statesville Boulevard and Hurley School Road in front of Hurley Elementary School, which had no power.
A tree fell onto a home at the intersection of Dappler Lane and Statesville Boulevard. The homeowners, according to emergency dispatchers, had to be evacuated.
Noah’s Play Loft, located in the same area on Dappler Lane, contacted parents to get their children because the preschool had no power, a parent said. The students and personnel were out the door by 11 a.m.
A downed tree covered Shue Road just beyond Porky’s Barbecue, off North Main Street in China Grove.
Area emergency responders, community leaders and other officials communicated via a Friday conference call about how departments responded to icy conditions.
Rowan 911 Communications Director Rob Robinson said dispatchers had a higher than normal volume of calls early in the day. He said from 6 a.m. to about 11:30 a.m. they got 499 calls, which is typically about the number of calls they receive in a day.
There was an increase in the number of burglar alarms that were set off by the storm.
Robinson said 112 power-related issues were reported, and that included trees on utility lines and some transformers that were on fire. There were 65 downed trees reported throughout the county, he said.
There were more than 50 traffic accidents, some of which involved damage to property and others where someone was pinned inside a vehicle and received some type of injury.
Of Duke Energy’s 62,117 customers in Rowan County, 21,302 lost power Friday morning. EnergyUnited reported 29,000 in a 10-county area without power before noon Friday. A shelter was opened Friday afternoon at the J.F. Hurley Family YMCA for residents without electricity.
The A tower at Novant Health Rowan Medical Center lost power for about three hours Friday morning due to a weather-related outage, hospital President Dari Caldwell said.
The hospital switched to emergency generators seamlessly, Caldwell said. “We didn’t miss a beat,” she said.
The power at the hospital came back on about 11:30 a.m.
Salisbury Fire Battalion Fire Chief David Morris said a fire was reported when a homeowner left a pot on the stove before the power outage.
When the power was restored, the food on the stove caused a fire. He reminded residents to check their power sources during and after outages.
Thomason said the temperature was expected to drop to 39 degrees overnight, and that could increase the chances of more slick spots on the roadway.
The National Weather Service forecasts patchy fog this morning with the highs in the mid-60s. The temperature will continue to rise and is expected to reach the lower 70s by Tuesday.

SALISBURY — To lure jobs and investment, community leaders once focused on what they didn’t have. “It was all about... read more